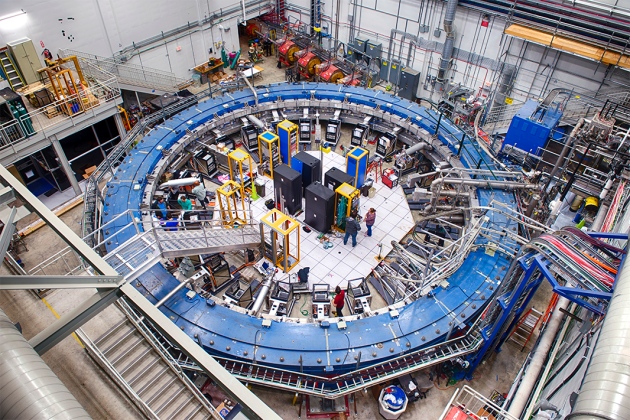 The Muon g-2 experiment will look for deviations from the standard model by measuring how muons wobble in a magnetic field.

In the search for new physics, experiments based on high-energy collisions inside massive atom smashers are coming up empty-handed. So physicists are putting their faith in more-precise methods: less crash-and-grab and more watching-ways-of-wobbling. Next month, researchers in the United States will turn on one such experiment. It will make a super-accurate measurement of the way that muons, heavy cousins of electrons, behave in a magnetic field. And it could provide evidence of the existence of entirely new particles.

The particles hunted by the new experiment, at the Fermi National Laboratory in Batavia, Illinois, comprise part of the virtual soup that surrounds and interacts with all forms of matter. Quantum theory says that short-lived virtual particles constantly ‘blip’ in and out of existence. Physicists already account for the effects of known virtual particles, such as photons and quarks. But the virtual soup might have mysterious, and as yet unidentified, ingredients. And muons could be particularly sensitive to them.

The new Muon g−2 experiment will measure this sensitivity with unparalleled precision. And in doing so, it will reanalyse a muon anomaly that has puzzled physicists for more than a decade. If the experiment confirms that the anomaly is real, then the most likely explanation is that it is caused by virtual particles that do not appear in the existing physics playbook — the standard model. 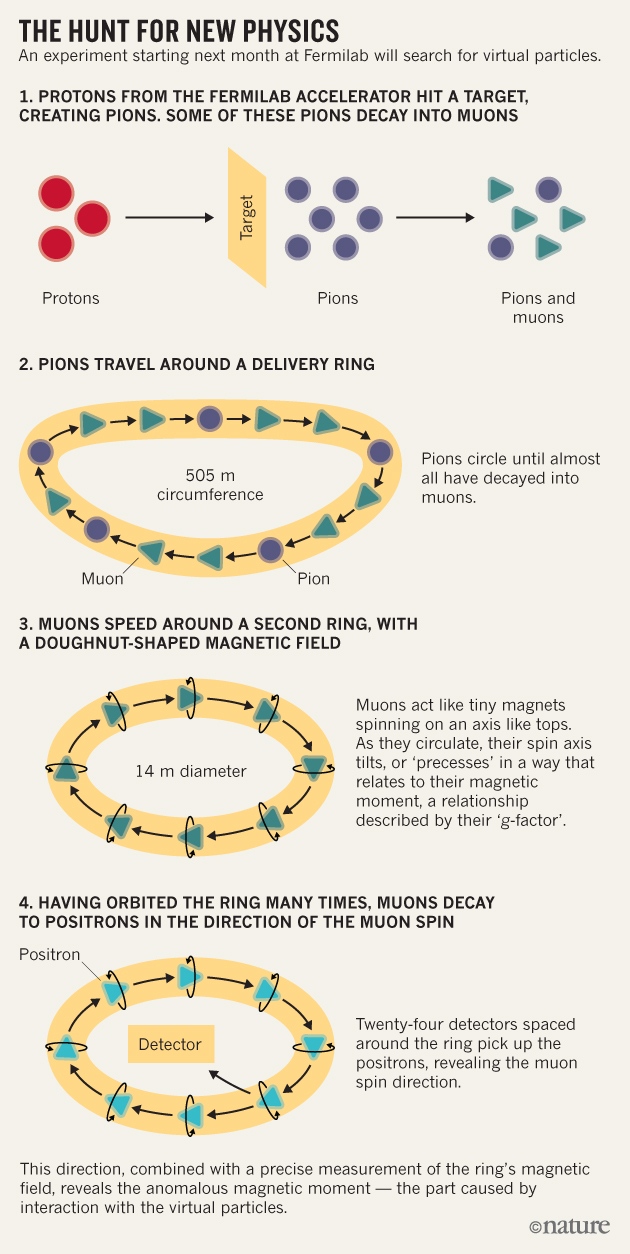 “It would be the first direct evidence of not only physics beyond the standard model, but of entirely new particles,” says Dominik Stöckinger, a theorist at the Technical University of Dresden, Germany, and a member of the Muon g−2 collaboration.

Physicists are crying out for a successor to the standard model — a theory that has been fantastically successful yet is known to be incomplete because it fails to account for many phenomena, such as the existence of dark matter. Experiments at the Large Hadron Collider (LHC) at CERN, Europe’s particle-physics lab near Geneva, Switzerland, have not revealed a specific chink, despite performing above expectation and carrying out hundreds of searches for physics beyond the standard model. The muon anomaly is one of only a handful of leads that physicists have.

Measurements of the muon’s magnetic moment — a fundamental property that relates to the particle’s inherent magnetism — could hold the key, because it is tweaked by interactions with virtual particles. When last measured 15 years ago at the Brookhaven National Laboratory in New York, the muon’s magnetic moment was larger than theory predicts. Physicists think that interaction with unknown particles, perhaps those envisaged by a theory called supersymmetry, might have caused this anomaly.

Other possible explanations are a statistical fluke, or a flaw in the theorists᾽ standard-model calculation, which combines the complex effects of known particles. But that is becoming less likely, says Stöckinger, who says that new calculation methods and experimental cross-checks make the theoretical side much more robust than it was 15 years ago.

“It would be the first direct evidence of entirely new particles.”

“With this tantalizing result from Brookhaven, you really have to do a better experiment,” says Lee Roberts, a physicist at Boston University in Massachusetts, who is joint leader of the Muon g−2 experiment. The Fermilab set-up will use 20 times the number of muons used in the Brookhaven experiment to shrink uncertainty by a factor of 4. “If we agree, but with much smaller error, that will show definitively that there’s some particle that hasn’t been observed anywhere else,” he says.

To probe the muons, Fermilab physicists will inject the particles into a magnetic field contained in a ring some 14 metres across. Each particle has a magnetic property called spin, which is analogous to Earth spinning on its axis. As the muons travel around the ring at close to the speed of light, their axes of rotation wobble in the field, like off-kilter spinning tops. Combining this precession rate with a measurement of the magnetic field gives the particles’ magnetic moment.

Since the Brookhaven result, some popular explanations for the anomaly — including effects of hypothetical dark photons — seem to have been ruled out by other experiments, says Stöckinger. “But if you look at the whole range of scenarios for physics beyond the standard model, there are many possibilities.” 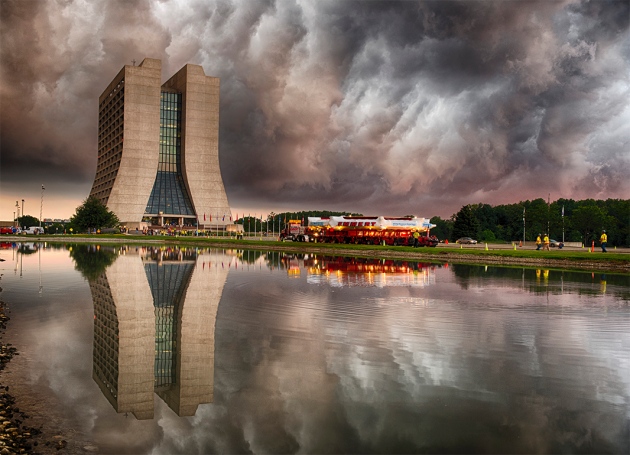 Fermilab is the home of the Muon g−2 experiment.

Although a positive result would give little indication of exactly what the new particles are, it would provide clues to how other experiments might pin them down. If the relatively large Brookhaven discrepancy is maintained, it can only come from relatively light particles, which should be within reach of the LHC, says Stöckinger, even if they interact so rarely that it takes years for them to emerge.

Indeed, the desire to build on previous findings is so strong that to avoid possible bias, Fermilab experimenters will process their incoming results ‘blind’ and apply a different offset to each of two measurements that combine to give the magnetic moment. Only once the offsets are revealed will anyone know whether they have proof of new particles hiding in the quantum soup. “Until then nobody knows what the answer is,” says Roberts. “It will be an exciting moment.”

The graphic in this story has been replaced with a more-accurate version. And the caption to the Fermilab image has been updated.