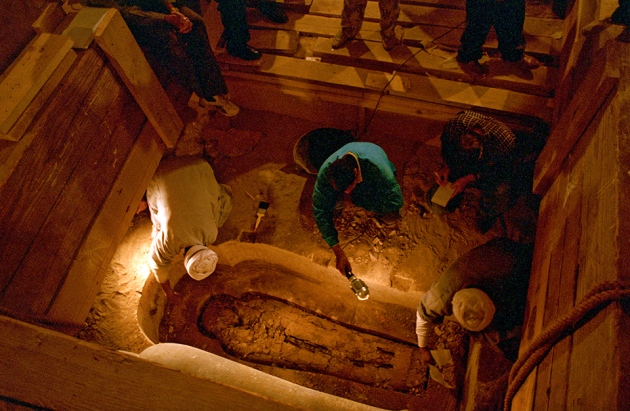 Excavations in the ancient city of Abusir el-Meleq.

The tombs of ancient Egypt have yielded golden collars and ivory bracelets, but another treasure — human DNA — has proved elusive. Now, scientists have captured sweeping genomic information from Egyptian mummies. It reveals that mummies were closely related to ancient Middle Easterners, hinting that northern Africans might have different genetic roots from people south of the Sahara desert.

The study, published on 30 May in Nature Communications1, includes data from 90 mummies buried between 1380 bc, during Egypt’s New Kingdom, and ad 425, in the Roman era. The findings show that the mummies’ closest kin were ancient farmers from a region that includes present-day Israel and Jordan. Modern Egyptians, by contrast, have inherited more of their DNA from central Africans.

Archaeological discoveries and historical documents suggest close ties between Egypt and the Middle East, but “it is very nice that this study has now provided empirical evidence for this at the genetic level”, says evolutionary anthropologist Omer Gokcumen of the State University of New York at Buffalo.

Egypt’s searing climate and the ancient practice of embalming bodies has made the recovery of intact genetic material daunting. The first DNA sequences thought to be from a mummy2 were probably the result of modern contamination, and many scientists are sceptical3 of purported genetic information acquired from the mummy of King Tutankhamun4.

The latest analysis succeeded by bypassing soft tissue — often abundant in Egyptian mummies — to seek DNA from bone and teeth. Researchers carefully screened the DNA to rule out contamination from anyone who had handled the mummies since their excavation a century ago in the ancient town of Abusir el-Meleq.

“More than half of the mummies we studied had pretty decent DNA preservation,” says co-author Johannes Krause, a palaeogeneticist at the Max Planck Institute for the Science of Human History in Jena, Germany.

The team “succeeds where previous studies on Egyptian mummies have failed or fallen short”, says Hannes Schroeder, a palaeo­geneticist at the University of Copenhagen. Now, researchers can hope to answer questions such as whether immigration drove ancient-Egyptian population growth, adds Sonia Zakrzewski, a bioarchaeologist at the University of Southampton, UK.

The scientists obtained information about variations in mitochondrial DNA, which is passed from mother to child, from 90 mummies. Because of contamination, the team was able to acquire detailed nuclear DNA, which is inherited from both parents, from only three mummies.

Both types of genomic material showed that ancient Egyptians shared little DNA with modern sub-Saharan Africans. Instead, their closest relatives were people living during the Neolithic and Bronze ages in an area known as the Levant. Strikingly, the mummies were more closely related to ancient Europeans and Anatolians than to modern Egyptians.

The researchers say that there was probably a pulse of sub-Saharan African DNA into Egypt roughly 700 years ago. The mixing of ancient Egyptians and Africans from further south means that modern Egyptians can trace 8% more of their ancestry to sub-Saharan Africans than can the mummies from Abusir el-Meleq.

The new data can’t explain why the ancient Egyptians were so tightly aligned with people from the Middle East. Was it the result of migration, or were the Stone Age hunter-gatherers of northern Africa genetically similar to those of the Levant? It’s too early to tell, Krause says, but there’s a better chance now of getting answers. “This is the first glimpse of the genetic history of Egypt,” he says. “But it’s really just the start.”