Mouse 'avatars' could in future allow physicians to find the most effective cocktail of cancer drugs to combat a particular tumour before giving them to a patient, according to researchers at the annual meeting of the Human Genome Organisation (HUGO) in Australia last week.

“Using a personalized cancer avatar makes it possible to try out different combinations and make some mistakes before going into the clinic,” says Edison Liu, president of HUGO and head of the Jackson Laboratory at Bar Harbor in Maine. “It’s the direction in which a lot of research groups are going.” 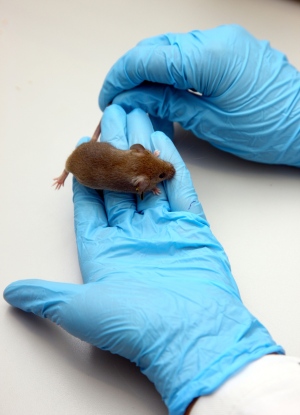 Personalized mouse models containing tissue from a specific patient's tumour could be used to test whether a cancer drug will work on that tumour.

An 'avatar' is a term informally used by cancer researchers to describe a mouse or other animal onto which tissue from a human tumour is grafted to create a personalized model of one patient's cancer. In one example of this approach, cancer researcher Sean Grimmond of the University of Queensland in Brisbane, with his colleagues from the Australian Pancreatic Cancer Genome Initiative, analysed a patient's pancreatic tumour to identify mutations that make the cancer susceptible to particular drugs. The researchers then created a personalized mouse model of that specific pancreatic cancer by xenografting a piece of the patient’s tumour onto immunodeficient mice. This allowed them to test the tumour's response to the drug mitomycin C, which their initial analysis had shown might be an effective treatment for the patient's cancer. Reporting their preliminary results at the meeting in Sydney, the researchers found that the tumours shrank after the mouse was administered the drug; however, the patient died before he could be treated with it.

The researchers think that the technique could be a promising approach to therapy in the future. Currently, less than 5% of people diagnosed with pancreatic cancer in the United States survive for five years1. The standard treatment, the drug gemcitabine, extends life expectancy by around a year.

“The ideal situation is to get the study going very early so that by the time the patient’s cancer has become resistant to standard treatment, you have new targets on hand,” says oncologist Manuel Hidalgo of the Spanish National Cancer Research Centre in Madrid, who also uses personalized xenograft models preclinically to test potential drug treatments for pancreatic cancer2.

Grimmond’s team, which is part of the International Cancer Genome Consortium (ICGC), uncovered a wide range of mutations by analyzing the genomes of over a hundred human pancreatic tumours. Aided by the results of a previous global genomic analysis of human pancreatic cancers3, the team identified several affected genes that were important for the growth and development of nerve cells. These results are consistent with previous work suggesting that proteins encoded by genes involved in guiding axons to their destinations could be promising targets for anti-cancer drugs4. “It’s enticing to think this could give clues as to how pancreatic cancer is so good at invading nerves, which causes severe pain in patients,” says Grimmond.

“This strategy is particularly suitable for heterogeneous cancers like pancreatic cancer,” says Andrew Biankin, head of pancreatic cancer research at the Garvan Institute in Sydney, and a lead collaborator on the ICGC project. For such cancers, a combination of drugs that hit a variety of targets is more likely to be effective than a single blockbuster therapy, Biankin says.

“This could rescue a lot of drugs that would otherwise be thrown out due to low responder rates during clinical trials,” says Biankin. He will lead an Australian clinical trial called IMPACT, which will expand the study by involving more patients with pancreatic cancer. Currently, many clinical trials for cancer close after too few patients respond to the drug being tested. But in the future, mouse avatars could first be used to identify subgroups of patients that are suitable for a given drug — and so improve response rates.

That will require a shift in the clinical mindset, says Hidalgo. “Our clinical-trial system is not set up for approving drugs based on small trials,” he says. “Drug approval requires randomized clinical trials with large numbers of patients, so there needs to be a change in the way regulatory agencies look at those trials.”