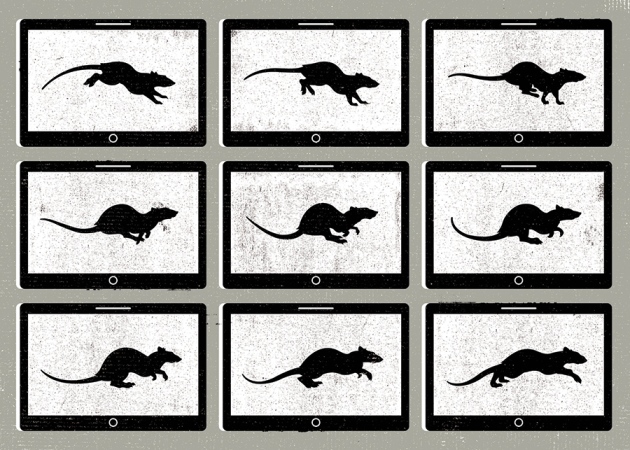 Palaeontologist Stephen Gatesy wants to bring extinct creatures to life — virtually speaking. When he pores over the fossilized skeletons of dinosaurs and other long-dead beasts, he tries to imagine how they walked, ran or flew, and how those movements evolved into the gaits of their modern descendents. “I'm a very visual guy,” he says.

But fossils are lifeless and static, and can only tell Gatesy so much. So instead, he relies on XROMM, a software package that he developed with his colleagues at Brown University in Providence, Rhode Island. XROMM (X-ray Reconstruction of Moving Morphology) borrows from the technology of motion capture, in which multiple cameras film a moving object from different angles, and markers on the object are rendered into 3D by a computer program. The difference is that XROMM uses not cameras, but X-ray machines that make videos of bones and joints moving inside live creatures such as pigs, ducks and fish. Understanding how the movements relate to the animals' bone structure can help palaeontologists to determine what movements would have been possible for fossilized creatures. “It's a completely different approach” to studying evolution, says Gatesy.

XROMM, released to the public in 2008 as an open-source package, is one of a number of software tools that are expanding what researchers know about how animals and humans walk, crawl and, in some cases, fly (see ‘Movement from inside and out’). That has given the centuries-old science of animal motion relevance to a wide range of fields, from studying biodiversity to designing leg braces, prostheses and other assistive medical devices.“We're in an intense period of using camera-based and computer-based approaches to expand the questions we can ask about motion,” says Michael Dickinson, a neuroscientist at the California Institute of Technology in Pasadena.

To use and develop effective software, however, scientists must learn how to adapt broad, open-source tools to their own needs — and when to build their own.

Movement from inside and out

Scientists monitoring animal motion use a variety of programs to automate the process.

The boom in motion-tracking tools has come about in part because of improvements in what researchers can see and measure. The first studies of animal and human motion, dating back to Aristotle, relied on naked-eye observations, anatomy and detailed pictures drawn by hand. In the nineteenth century, the science of biomechanics was boosted by photography — perhaps most famously in a series of images of a galloping horse taken by British photographer Eadweard Muybridge, and published in his Animal Locomotion collection in 1887.

Higher-speed cameras eventually improved what could be captured. But movement studies still needed a person to look through the results frame by frame, laboriously tracing the arc of each step, arm swing or wing flap to extract information about angles and forces. Much of that tedium can now be relieved by computers or other measuring tools. But such tools are often expensive, and even today, many researchers do without them. Gatesy recalls a graduate student's surprise at the low-tech approach that was used to study gait in rodents a few years ago: “It wasn't uncommon just to dip their feet into some ink, have them leave some tracks and take measurements from those,” he says.

Lately, however, scientists have been coming up with methods that are much more sophisticated without being too expensive. In July, developmental biologists Richard Mann and César Mendes at Columbia University in New York City and their colleagues published a paper on MouseWalker: a system they have built to automatically analyse changes in a mouse's gait (C. S. Mendes et al. BMC Biol. 13, 50; 2015). It involves an inexpensive set-up in which a mouse walks on a transparent surface over a high-speed camera that records the animal's footfalls. An analytical technology called machine vision allows the MouseWalker software to discern details such as the position of each step relative to the mouse's body.

Mendes says that this information can be used to detect when something goes wrong with gait, as can happen with the onset of neurological illnesses such as Parkinson's disease. MouseWalker was adapted from FlyWalker, a system that Mendes and his team helped to develop to let neuroscientists track how fruit flies walk after their neurons have been manipulated. Both MouseWalker and FlyWalker are open source: the authors hope that making the software available for free will help to attract users who can add parameters that they had not thought of.

The desire to share tools is common to many developers, so motion-tracking software is finding applications in a number of fields — sometimes in unexpected ways. “One of the things we hope for is that people will use what we develop and go in a new direction with it,” says Jen Hicks, an engineer at Stanford University in California, who helps to manage OpenSim — an open-source software package that allows users to model joints, muscles and how they move. OpenSim has more than 20,000 users, and part of Hicks's job is to organize workshops and tutorials to guide this growing community.

The OpenSim community serves as an exemplar of what newer programs such as XROMM or MouseWalker could become. The software models musculoskeletal systems, and researchers have used it to simulate everything from the potential outcomes of surgery to the muscular forces of goats. Since the first version of OpenSim was released in 2007, the package has gone through dozens of upgrades that have added features and improved the algorithms used for calculations. It has been downloaded more than 100,000 times. “It's amazing how much the community has grown,” says mechanical engineer Katherine Steele of the University of Washington in Seattle, who first began using OpenSim while studying cerebral palsy as a graduate student at Stanford.

Serving an ever-larger crowd requires careful planning to make the program accessible, says Hicks. Through grants from the US National Institutes of Health, she and her colleagues keep manuals up to date with the new releases. Ensuring that the software can be tailored to a researcher's particular needs has helped new users to embrace it, she says.

The limits of broad platforms

XROMM's developers are in the middle of building up the infrastructure to make the software accessible to a wider community, for instance setting up a site to host the newest open-source version, XMA Lab, which became available in December 2014. The team has tried to make the latest versions of the software easier for new users. For example, says Elizabeth Brainerd, a colleague of Gatesy at Brown, “There used to be about 20 pieces of information you had to keep track of,” including items such as calibration measurements. “But now it's all integrated”.

It is important not to make things too easy, says Steele: if the software does too much of the work, there is a risk that the researchers will misunderstand the data that it spits out. However, as an open-source program develops, understanding its architecture can get very complicated. “Sometimes the software can get so big that it becomes black-box-ish. Then it might be better for you to build your own,” she says.

Dickinson agrees, and says that sometimes, modifying open-source tools is not enough. “As science is becoming more quantitative, we're all working on finer slices of the pie,” he says. “If you only got to use a microscope that someone else built, so to speak, you won't be able to get as far.”

Regardless of what tools are available, researchers intend to keep expanding the applications of motion tracking. Hicks anticipates seeing more people using the tools to explore neural control and robotics designs. And she expects the software to keep improving. “We're finding ways to learn from even messier motion data, like from accelerometers in your phone,” she says. “Bringing together more machine learning and biomechanics — that will be the next step.”

This article wrongly stated that Katherine Steele worked on cystic fibrosis instead of cerebral palsy. The text has been corrected.

This article omitted the full name and affiliation for Elizabeth Brainerd, who is a colleague of Gatesy at Brown University. The text has been corrected.