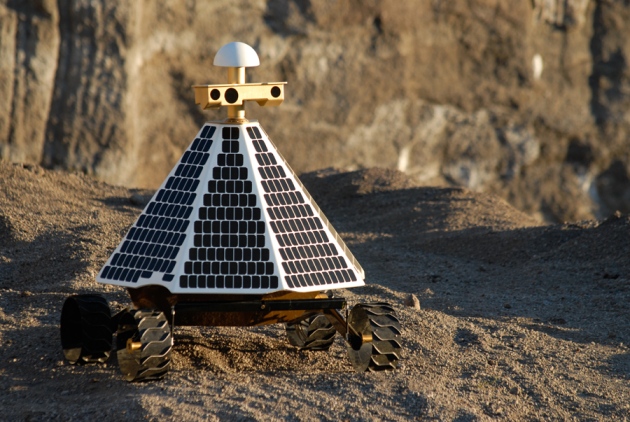 The Google Lunar X Prize is dangling new carrots in front of the 18 private teams that are trying to put a lander on the Moon by the end of 2015. On 19 February, the prize organization announced that five teams — two US groups, one Indian, one German and one Japanese — will compete for US$6 million in ‘milestone prizes’. To win the cash, prototype landers will have to demonstrate by September 2014 that they can soft-land on the Moon, move more than 500 metres once there and beam back video from the surface.

The tests will be taking place on Earth. And that is where many think that the landers will remain two years from now. Although the milestone prizes offer further financial encouragement — and catnip for the media — the goal of reaching the Moon still seems very far away. Some team members and outside observers have doubts that the $20-million main prize, which aims to stimulate the private market for getting to the Moon, will be won at all.

Jonathan McDowell, a space historian and astronomer at the Harvard-Smithsonian Center for Astrophysics in Cambridge, Massachusetts, says that the technological hurdles are too high and the financial incentives too low. “The Google Lunar X Prize is one of the least promising things I’ve seen come out of the private space industry,” he says. “In two years, I just don’t see it from any of these teams.”

The X Prize Foundation, based in Culver City, California, will probably have to extend the 2015 deadline, says Wolfgang Demisch, a retired aerospace consultant in New York who has served on the US National Science Foundation’s Next Generation Launch Technology panel. But Alex Hall, senior director for the Lunar X Prize, says that the organization is not contemplating any such extension.

Reaching for the Moon

The Google Lunar X Prize offers US$20 million to the first team that lands a craft on the Moon, moves it 500 metres and sends back video casts. Today, 18 teams remain officially registered, down from a peak of 33.

September 2007 Google Lunar X Prize is announced with a deadline to launch and land a craft on the Moon by the end of 2012.

September 2013 The X Prize organizers withdraw a stipulation that prize money will be reduced if a government mission lands on the Moon before a winning X Prize team. China's Chang’e 3 lunar lander touches down in December 2013.

February 2014 Five teams earn the right to compete for ‘milestone’ prize money for Earth-bound demonstrations of their lander, rover and video capabilities. The teams are Astrobotic, Moon Express, Part-Time Scientists, Hakuto and Indus.

The rules and deadlines have already been adjusted since the prize was first announced in 2007. The original deadline of 2012 was extended to 2015 in November 2009. And in September 2013 — when it was clear that China was going to put its rover, Jade Rabbit (or Yutu), on the Moon — organizers withdrew a provision that would have reduced the prize money if a government-sponsored mission beat the X Prize teams to the punch (see 'Reaching for the Moon').

Part of the problem has been convincing investors to put up cash. When the $10-million Ansari X Prize for achieving repeatable spaceflight with a manned craft was won in 2004 by Scaled Composites of Mojave, California, it was easy to see a financial motivation beyond the prize itself. The sponsors of the winning team founded Virgin Galactic, based in Las Cruces, New Mexico, which has been taking deposits for space-tourist tickets costing $250,000 since 2005.

To clarify the business outlook, this time, the X Prize Foundation commissioned a study by UK consultancy London Economics. The study concluded that by 2025 there would be a $1.9-billion lunar market for everything from hauling payloads to hardware development. Payload delivery is a big part of the plan for Astrobotic, a spin-out company from Carnegie Mellon University in Pittsburgh, Pennsylvania, and one of the teams competing for the milestone prizes. “Think of us as a FedEx to the Moon,” says the company’s chief executive, John Thornton. It already has a handful of payload contracts — for example, to deliver human ashes to the Moon for Celestis, a company that does ‘memorial spaceflights’. Astrobotic plans to charge $1.2 million per kilogram for a soft-landing delivery, and less for a non-controlled drop.

In it to win it

To win the US$20-million main Google Lunar X Prize, a team's spacecraft must land on the Moon, move 500 metres and beam back video footage. Some of the 18 X Prize teams are in a better position to win than others. Here is the latest on seven front runners.

Moon Express The team revealed the design for its 150-kilogram MX-1 lander in December 2013. Instead of using a rover, its lander will ‘hop’ the required 500 metres. The US team has made arrangements for a launch in late 2015, the details of which are undisclosed.

Astrobotic Technology This team, based in Pittsburgh, Pennsylvania, has built a prototype lander, which has undergone a shake test to prove it would survive a launch, and weighs 535 kg without fuel. The team's explorer, Red Rover, will take up 20 kg of that total. Astrobotic has a deposit with space transport company SpaceX for a launch between October and December 2015 for its $100-million mission.

Lunar Lion The Pennsylvania State University team has a design for a 165-kg lander, and a crowdfunding campaign to raise $400,000 to build and test it this summer. Its lander will also hop. The team has a deposit with former X Prize team Phoenicia for a December 2015 launch. Lunar Lion has raised about $2.5 million for its $60-million mission.

Barcelona Moon This Spanish team revealed its lander design in November 2013. It has signed a deal with the China Great Wall Industry Corporation for a June 2015 launch.

Part-Time Scientists The team, based in Germany, has a design for a booster and lander weighing 640 kg without fuel, including a highly instrumented rover. The team plans to use a Dnepr rocket, originally designed as Soviet-era intercontinental ballistic missile, which it can book just a few months in advance of its launch.

Indus This team from India is expecting a prototype of its 300-kg lander to be delivered soon. Its 15-kg rover is being designed this year. Indus plans to use a launcher from the Indian Space Research Organisation or the agency’s commercial arm, Antrix, but has no funds secured as yet for its $30-million mission.

Hakuto The Japanese team is, unusually, not developing its own lander, but is instead buying a ride on another mission for its two rovers, one of which has the ability to climb down into caves. The team is in negotiations with a launch provider for its cheap $10-million mission.

But most teams are hoping for bigger customers — in particular, NASA. And the agency is indicating its interest: in 2010, it handed out six contracts (including four to X Prize teams) worth up to $30 million over five years to collect data on everything from lander test-flight results to the properties of lunar soil. Then, last month, NASA announced a programme that will offer free technical expertise, equipment and facilities to companies developing lunar landers. The only academic X Prize team, Lunar Lion of Pennsylvania State University in University Park, says that it is using the competition to gain an introduction to the world of NASA mission contracts. But McDowell points out that money from NASA “is very dependent on whims of Congress”.

The X Prize competitors expect to be able to complete their first Moon mission for tens of millions of dollars. That would be cheap compared to past NASA missions, such as the Mars Pathfinder mission that put a small rover on the red planet in 1997 for $265 million. But even with the lower price tags, none of the 18 teams has reported raising sufficient funds. Only four teams — Astrobotic, Lunar Lion, Moon Express and Barcelona Moon — have booked launches for 2015 (see 'In it to win it'). And only Astrobotic has reported testing a full prototype lander. A few of these teams confessed to Nature that the 2015 prize deadline will be tight. “It’s not impossible,” says Lunar Lion team leader Michael Paul. “Feasible is a different word.”

Most intend to continue with their business plans, with or without the X Prize. “We’ll still be going after the Moon,” says Thornton. “No matter what.”

This story wrongly gave the date of November 2013 instead of September 2013 for the change to the prize rules relating to government-sponsored missions. The text has now been corrected.