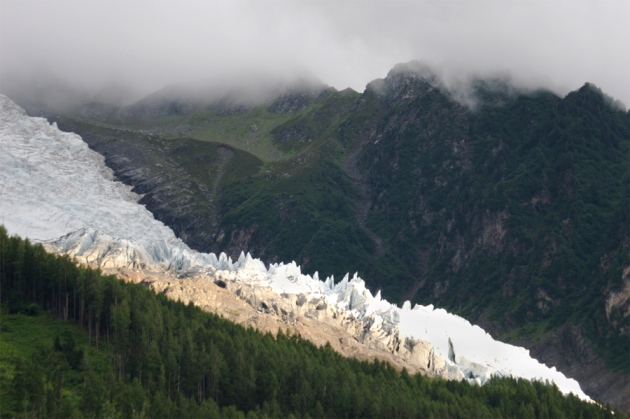 The Bossons Glacier, one of Mont Blanc's largest, may protect the mountain from erosion.

Western Europe’s tallest mountain may be gaining height thanks to its glaciers, which protect the mountain from erosion, a new study suggests.

Straddling the Italian and French Alps, Mont Blanc’s familiar snowy cap has challenged the most skilled climbers — as well as scientists who aim to understand how the mountain is being shaped by its glacial covering.

Typically, glaciers are known to erode surfaces and transport sediment, carving out deep valleys in mountain ranges and wearing down summits as the ice slowly slides downhill. But in the past few years, research has suggested that glaciers have a role in protecting mountaintops located at high latitudes, far from the equator1. The same now seems to be true for mid-latitude Mont Blanc, and could apply more generally to mountains in mid-to-low latitudes, says glacial geologist Jean-François Buoncristiani, co-author of a study that appeared late last month in Earth and Planetary Science Letters2.

“It’s interesting that the same processes are happening on mountains worldwide,” says Buoncristiani, who is at the University of Burgundy in Dijon, France. Mont Blanc is growing by 1 millimetre per year because of tectonic uplift, but without the protective effect of glaciers that would not be fast enough to outpace erosion.

The study team, led by glaciologist Cécile Godon at the University of Savoy in Le Bourget du Lac, France, measured erosion rates beneath one of Mont Blanc’s largest and least-spoiled glaciers, the Bossons Glacier, and compared them with erosion rates in ice-free areas adjacent to the glacier. By identifying distinctive rock types and by dating the mineral zircon in sediment samples taken from along the glacier’s length, they traced eroded sediments back to their sources.

Near the summit, beneath the coldest ice of the glacier, erosion was at least 16 times less efficient than beneath the temperate ice of the glacier tongue, farther downslope. The most effective erosion was found to take place in the non-glaciated areas, suggesting that the weighty presence of ice — especially when frozen onto the mountain — tempers abrasion of the underlying bedrock.

But the findings do not necessarily mean that glaciers protect all mountains. Mark Brandon, a geophysicist at Yale University in New Haven, Connecticut, says that glaciers with a wet base are very erosive. It remains to be seen how ice is shaping the world’s largest mountains, he says.

Buoncristiani adds that the role of glaciers could change as temperatures rise with global warming. An increase in ice melt would expose mountaintops to erosion, limiting their ability to reach ever greater heights.