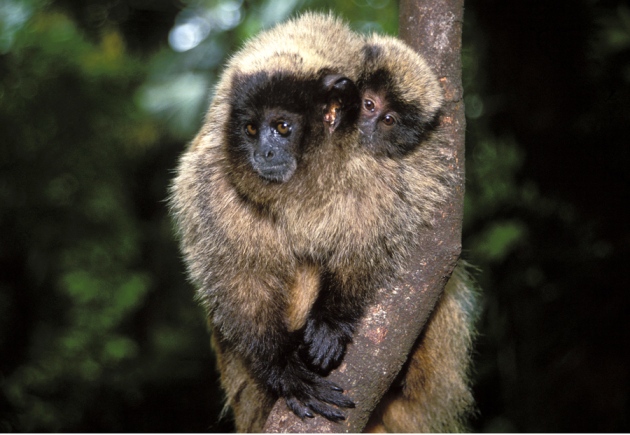 The black-fronted titi monkeys of south-eastern Brazil are the first animals found to alert their peers about predators' whereabouts — whether they are on the ground or up on a tree — as well as being specific about the type of predator.

Listen very carefully in the rainforests of Brazil and you might hear a series of quiet, high-pitched squeaks. These are the alarm calls of the black-fronted titi (Callicebus nigrifrons), a monkey with a rusty-brown tail that lives in small family units. The cries are loaded with information.

Cristiane Cäsar, a biologist at the University of St Andrews, UK, and her colleagues report that the titis mix and match two distinct calls to tell each other about the type of predator that endangers them, as well as the location of the threat. Her results are published in Biology Letters1.

Cäsar's team worked with five groups of titis that live in a private nature reserve in the Minas Gerais region of Brazil. When the researchers placed a stuffed caracara — a bird of prey — in the treetops, the titis gave out A-calls, which have a rising pitch. When the animals saw a ground-based threat — represented by an oncilla, a small spotted cat — they produced B-calls, sounds with a falling pitch.

However, when the team moved the predator models around, the monkeys tweaked their calls. If the caracara was on the ground, the monkeys started with at least four A-calls before adding B-calls into the mix. If the oncilla was in a tree, the monkeys made a single introductory A-call before switching to B-calls.

“A single call doesn’t really tell the recipient what’s happening, but they can infer the type of predator and its location by listening to the first five or six calls,” says co-author Klaus Zuberbühler of the University of Neuchâtel in Switzerland. “The five different groups were almost unanimous in their response. There was no deviation.”

Many studies have shown that animals and birds use different alarm calls for different predators. Some species, such as meerkats and black-capped chickadees, can even encode the urgency of the threat in their calls2, 3. But the titis are the first non-human animals found to encode both a predator’s type and location in their alarms, Zuberbühler says.

They are also the first New World monkeys to show signs of a primitive syntax, he adds. Until now, only apes and Old World monkeys were known to combine individual elements in different orders to convey distinct meanings. The latest discovery suggests that simple syntactic rules may have preceded the split of these two lineages some 40 million years ago.

By studying more species, the team hopes to better understand the origin of our own syntax. “For now, we don’t know how these calls relate to our own capacity to produce and comprehend higher-order structures,” says Zuberbühler. “But when we started researching this ten years ago, the perceived wisdom was that non-human-primate calls only refer to events, without any syntactic organization or combinations. That’s clearly not true.”

But Kurt Hammerschmidt, who studies animal communication at the German Primate Center in Göttingen, is not convinced that the calls show the type of structural organization that the team suggests. “I’m not sure because there aren’t really good signs that the sequences have further regularities, besides the first call, or that the combinations contain further information,” he says.

The team now plans to play recordings of the different call sequences back to the titis to see how they react. They also want to study other primates, especially the great apes. “No one’s looked at their combinations of gestural signals and vocalizations, and that’s possibly where future discoveries will take place,” says Zuberbühler.