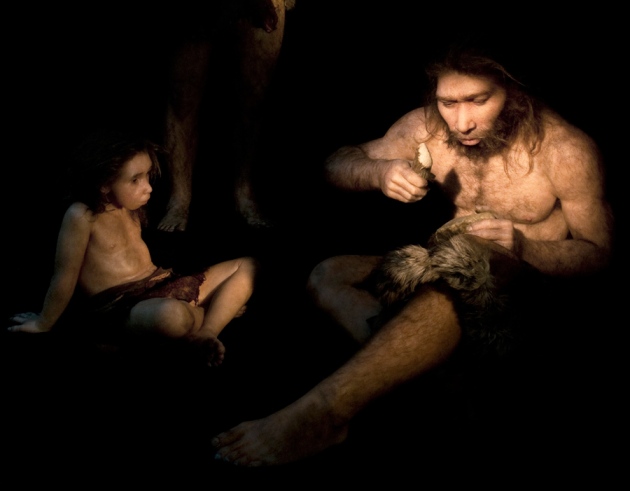 Neanderthals made beneficial contributions to the genomes of many modern humans.

Sex with Neanderthals had its ups and its downs. Cross-breeding may have given modern humans genes useful for coping with climates colder than Africa's, but the hybrid offspring probably suffered from significant fertility problems.

Those conclusions come from two papers published today in Science1 and Nature2, which identify the slices of the genome that contemporary humans inherited from Neanderthals, the stocky hunter-gatherers that went extinct around 30,000 years ago.

Homo sapiens and Neanderthals share a common ancestor that probably lived in Africa more than half a million years ago. The ancestors of Neanderthals were the first to move to Europe and Asia while the modern-human lineage stayed in Africa. But after modern humans began to leave Africa less than 100,000 years ago, they interbred with the Neanderthals who had settled on a range stretching from Western Europe to Siberia.

“These were bits of the genomes that had not seen each other for half a million years,” says David Reich, a population geneticist at Harvard Medical School in Boston, Massachusetts, who led the Nature study along with colleague Sriram Sankararaman. “That’s something that doesn’t happen in human populations today.”

Genome sequences harvested from Neanderthal bones have previously confirmed that the two groups mated, and that about 2% of the genomes of people who descend from Europeans, Asians and other non-Africans is Neanderthal3, 4. The Neanderthal contributions are peppered across the genome, and different people have different Neanderthal genes.

Research has indicated that some of these genes are involved in functions such as battling infections5, 6 and coping with ultraviolet radiation7. But the latest studies are the first to identify a large proportion of the genome segments that humans inherited from Neanderthals.

Both teams developed computational methods to identify segments of the human genome that were likely to have originated hundreds of thousands of years in the past, yet entered the human gene pool far more recently. The teams then checked whether or not these segments were present in the actual Neanderthal genome sequence to come up with a catalog of Neanderthal genes in humans.

Joshua Akey, a population geneticist at the University of Washington in Seattle who wrote the Science paper with colleague Benjamin Vernot, says that his team found about one-fifth of a Neanderthal genome spread across the publicly available genomes of 665 living Europeans and East Asians. Reich and his team estimate that they could put together about 40% of the Neanderthal genome from the sequences of 1,004 living people that they studied.

The teams looked for Neanderthal genes that were especially common in contemporary humans, a sign that the genes were useful to their new owners. Both groups identified a series of genes involved in the inner workings of cells called keratinocytes, which make up most of the outer layer of human skin and produce hair.

“It’s tempting to speculate that Neanderthals were already adapted to colder environments in Eurasia” and that these genes helped modern humans to cope after they arrived from Africa, says Reich. Akey points out that the skin helps to mediate moisture loss and protect against pathogens, and Neanderthal genes that were already adapted to life in Europe and Asia would be helpful to H. sapiens in its new environment. These hypotheses are speculative, the researchers say, and they agree that follow-up studies will be needed to determine how Neanderthal keratinocyte genes benefited modern humans.

Both studies also discovered vast numbers of Neanderthal genes that none of the contemporary humans carried. “We find these gigantic holes in the human genomes where there are no surviving Neanderthal lineages,” says Akey. This is a strong indication that the genes were harmful to human–Neanderthal hybrids and their descendants, and were purged as the descendants continued to mate. “Most of these variations were removed in a couple of dozen generations,” Reich says.

Akey’s team found that one large chunk of modern-human genome that bears no Neanderthal contributions is the one that encompasses the gene FOXP2, which is involved in speech in humans.

Reich’s team, meanwhile, discovered that today's humans tend to have few of the Neanderthal genes that are activated in the testes or located on the X chromosome. In organisms such as fruitflies, such patterns are hallmarks of hybrid sterility, indicating that two populations are too distantly related to breed successfully. Modern humans and Neanderthals “were at the edge of biological compatibility”, Reich concludes, and their hybrids probably suffered high rates of infertility.

“Neanderthals aren’t around, so you can’t do a mating experiment,” says Daven Presgraves, an evolutionary biologist at the University of Rochester in New York. But the patterns that Reich’s team noticed are exactly what you would expect if their hybrids suffered from reduced fertility, he adds.

However, Presgraves was surprised that modern humans and Neanderthals, separated by only tens of thousands of generations, would already show signs biological incompatibility. Animals such as fruitflies typically need to be separated for much longer to evolve naturally into distinct species, he says.

Sarah Tishkoff, a population geneticist at the University of Pennsylvania in Philadelphia, says that the studies rank as “some of the most exciting papers I’ve seen”. She adds that the work hints at the possibility of studying ancient-human genomes gleaned not from bones but from the DNA of contemporary populations.

Such studies could be especially revealing in Africa (see 'African genes tracked back'). There, well-preserved samples of ancient DNA are scarce, and yet genome studies of today's inhabitants of the continent8 hints that although ancient Africans did not mingle with Neanderthals they may have interbred with other now-extinct groups. “We really need to be able to apply these methods to African populations,” says Tishkoff. “Just imagine what we’re going to find there.”