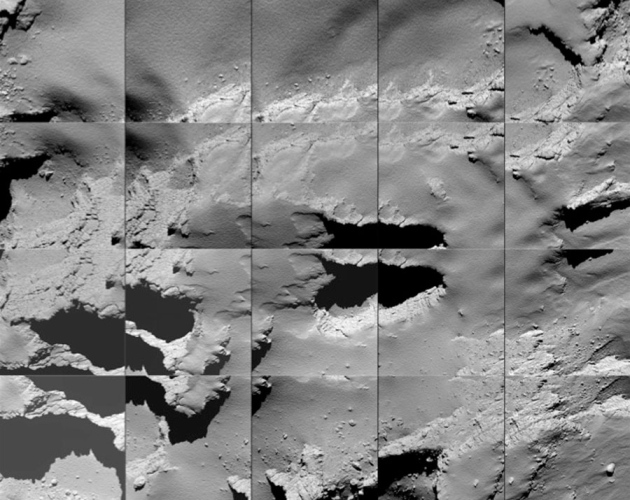 A sequence of images captured by Rosetta during its descent to the surface of comet 67P.

The European Space Agency's comet-orbiting Rosetta spacecraft was successful to the last. It crash-landed on the comet 67P/Churyumov–Gerasimenko within a minute of its scheduled impact time at 11:19 UTC on 30 September, ending its 12-year long, €1.3-billion (US$1.45-billion) mission with a bump — and a final tranche of data.

The orbiter's final resting place has been named Sais, after the site in Egypt where the mission's namesake, the Rosetta stone, was originally displayed. “We can finally say Rosetta has come home to Sais,” said mission manager Patrick Martin, speaking from the control room at the European Space Operations Centre (ESOC) in Darmstadt, Germany. “Farewell Rosetta, you’ve done the job. That was space science at its best.”

Flight engineers at ESOC watched quietly for Rosetta's communications signal to flatline — the sign that the craft had landed. At the critical moment, onlookers looked stunned before breaking out into applause to celebrate the culmination of the mission.

The daring finale was designed to get scientists the closest possible images and measurements of dust, gas and plasma from a comet. Rosetta sent back a continuous stream of data as it drifted down at a sedate walking pace from a height of 19 kilometres onto comet 67P's surface; ESA broadcasted the images throughout the descent.

Holger Sierks, principal investigator for Rosetta's OSIRIS instrument (Optical, Spectroscopic, and Infrared Remote Imaging System), showed off the final pictures. A gravel field strewn with pebbles and boulder-like shapes is visible in the crude unprocessed images. “This will keep us busy,” he said. 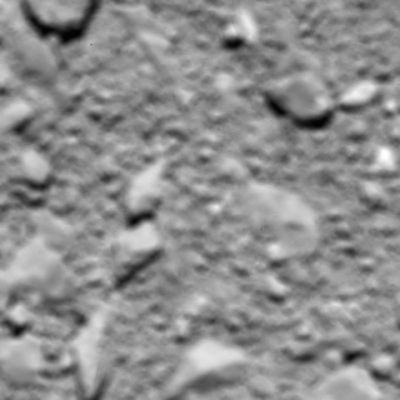 Rosetta's last image of comet 67P/Churyumov–Gerasimenko, at an altitude of around 20 metres above the surface. The image is 0.96 metres across.

The craft transmitted its closest shot (pictured) just 10 seconds before impact, around 20 metres away from the comet. “That image was extraordinary,” says Stephen Lowry, a cometary scientist at the University of Kent, UK, and a member of the OSIRIS camera team.

Rosetta’s ultraviolet spectrograph, which studies the characteristic fingerprints in reflected light that reveal the comet’s make-up, took its last data just minutes before the crash. Alan Stern, a planetary scientist at the Southwest Research Institute in Boulder, Colorado, and principal investigator of the NASA instrument, called the data’s 3-metre resolution “unprecedented for ultraviolet studies of comets”.

In the coming days, ESOC will use housekeeping data to put together a reconstruction of Rosetta’s last journey. Estimates suggest that the landing was as close as 40 metres to the target site, with instruments sending back data well within a minute of the crash, says Martin. “The plan worked well until the end, really flawlessly,” he says. Most of Rosetta’s operations and science staff will now move onto other projects, but Martin will remain on the mission for three years, largely to archive data.

So far, scientists have analysed only around 5% of the data that Rosetta has gathered since it began orbiting 67P two years ago, said André Bieler, a planetary scientist at the University of Bern in Switzerland and a member of Rosetta’s ROSINA (Rosetta Orbiter Spectrometer for Ion and Neutral Analysis) team, at a meeting at ESOC on the eve of the crash. “We have collected data we haven’t had time to look at, but they’re there, and they’re ready to be assembled,” he said.

Rosetta has already made striking findings, including the discovery of water from comet 67P with a different isotopic composition to that on Earth, as well as molecular oxygen and nitrogen, which points to the comet being as old as the Solar System itself. Scientists also determined how 67P got its strange rubber-duck shape, deducing that the head and body were formed separately. 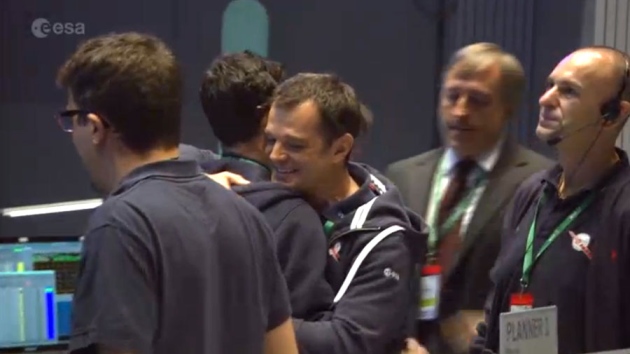 But many questions remain. A big challenge will be to figure out how the pebbles visible in Rosetta’s final shots were created, says Lowry. They may have been shaped by dust, which is tossed into the air by sublimating ice and then falls back to the surface. Another tantalising possibility is that the pebbles are the building blocks from which 67P was originally built. If so, they might be able to tell scientists about the origins of the Solar System.

The Rosetta mission was the first to orbit (rather than just visit) a comet; the first to land a probe on a comet and, in its final moments, the first to conclude with a controlled comet crash-landing. (In 2001, NASA's NEAR Shoemaker mission also crash-landed — but that was on an asteroid, a body much larger and closer to Earth than 67P.) “Rosetta has entered the history books once again,” said Johann-Dietrich Wörner, ESA’s director-general.

The ability to observe a cometary body changing over time, and from such close quarters, is likely to mean “a true revolution” in cometary science, says Geraint Jones, a planetary scientist at University College London. “It’s just a wealth of data. The level of detail is incredible,” he says.