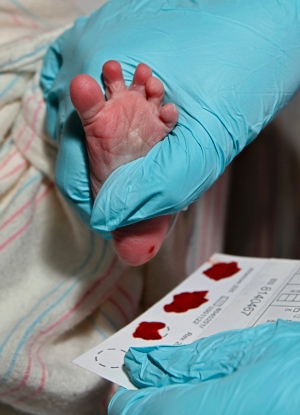 Retaining blood spots from newborns allows for the screening of conditions such as phenylketonuria, which can cause mental retardation.

Minnesota will once again allow blood spots to be kept and used for further research following routine newborn screening of genetic and congenital diseases, thanks to a bill signed into law by the state's governor, Mark Dayton, this week. But privacy advocates opposing the law say that they will keep fighting to prevent newborns’ DNA from being stored indefinitely.

The bill effectively reverses a 2011 ruling by the state’s Supreme Court, which said that the practice violated the state’s genetic-privacy laws. Under court orders, health officials destroyed more than 1 million blood spots dating back to 1997. The new law, which goes into effect on 1 August, will allow officials to keep the blood spots indefinitely.

Supporters say the research is part and parcel of keeping infants healthy. Mark Schleiss, a virologist at the University of Minnesota in Minneapolis, studies cytomegalovirus, which causes deafness in children; his laboratory screens blood spots to determine whether children with hearing loss were infected with the virus as newborns. He says that he has had to turn down requests from parents for such analyses since the 2011 ruling. “This very welcome bill is all about giving freedom back to parents to make decisions for their child,” Schleiss says.

Under the new law, parents will be allowed to opt out of having the sample stored just after birth in the hospital. But Twila Brase, president of the Citizens’ Council for Health Freedom in St Paul, Minnesota, which has fought the bill, contends that parents may not always know how researchers will use the samples, and may have objections to certain kinds of research. She views the practice of taking blood spots as tantamount to “a seizure of private property”, she says. “It’s clearly valuable to the government, but they couldn’t do that with your coat or your cat.”

Brase adds that although her organization does not yet have a strategy to fight the programme, they will be trying to make parents more aware of what is happening. “This is by no means the end of the story,” she says.