Would you eat caviar and white chocolate in the same mouthful? The answer might depend on where in the world you live.

In North American and Western European cuisines, chefs tend to combine foods that share flavour compounds, so the more adventurous would serve up caviar and white chocolate, because they share trimethylamine, among other compounds. But Asian chefs work differently, according to work published today in Scientific Reports1 by theoretical physicist Sebastian Ahnert from the University of Cambridge, UK, and his colleagues. 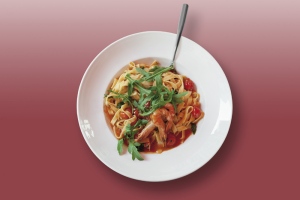 Shrimp and tomato are often paired together in North American cuisine, because they share certain flavour compounds.

Ahnert, himself an amateur molecular gastronomist, was intrigued by the anecdotal suggestion that the reason some foods go well together is because they contain the same flavour molecules. He and his team therefore developed networks to link flavour compounds with the ingredients found in one Korean and two American online recipe databases, grouping recipes into North American, Western European, Latin American, Southern European or East Asian cuisine.

He found that in North American and Western European recipes, the anecdotal evidence rang true. For example, the North American dish shrimp scampi and tomato broil has a recipe where the two main ingredients (shrimp and tomato) share 1-penten-3-ol, and the mozzarella, parmesan and tomato used in the recipe all share 4-methylpentanoic acid.

But in East Asian and Southern European recipes, the trend was the opposite — the ingredients were less likely to share flavour compounds.

The team also found that some common ingredients in North American recipes — milk, butter, cocoa, vanilla, cream and eggs, for example — share flavour compounds with many other foods. Once these foods were removed from the analysis, the extent of flavour sharing dropped away. Conversely, in East Asian cooking, when the team removed the most common ingredients that shared the least flavour compounds (beef, ginger, pork, cayenne, chicken and onion) from the analysis, the flavour sharing in the remaining ingredients increased.

These findings point to something else at play in Asian cuisines that hasn’t yet been identified, says Ahnert. “It’s clearly something different from shared compounds,” he says. “To get a clearer idea of what’s going on I want to look at better data on flavour compounds.” He has therefore contacted the owners of professional databanks to find out how much of each flavour compound is present in an ingredient. He also wants to check whether ingredients with similar tastes, or even smells, but not the same flavour compounds, are used together.

Other studies into ingredients and recipes have been conducted. Antonio Roque at the University of São Paulo, Brazil, and his colleagues compared the ingredients in various recipes to track which were most common, and found that some prevailed because of their historical presence in a particular culture2.

“I think [Ahnert’s work] has more potential to inspire practical culinary applications than ours, because it proposes a way of constructing flavour networks and flavour-based cooking has become popular in recent years,” says Roque, who adds that both studies highlight the utility of network analysis in fields that wouldn’t traditionally use such methods.

Ahnert agrees. He thinks that his analysis could identify new flavour combinations that could work well together — at least for some palates.

As for the non-matching flavours of Asian cuisines, to unpick that will require more work. “There are a variety of explanations,” Ahnert says, including deep-rooted cultural reasons for combining certain ingredients.

Until then, Ahnert will return to his data, and to the kitchen, where he is keen to try the flavour combinations that arose during his analysis. In particular he wants to combine coffee and garlic. After all, he says, coffee is often used as a replacement for stock. It might take some convincing, however, for coffee shops to start offering a garlic shot with their cappuccinos.