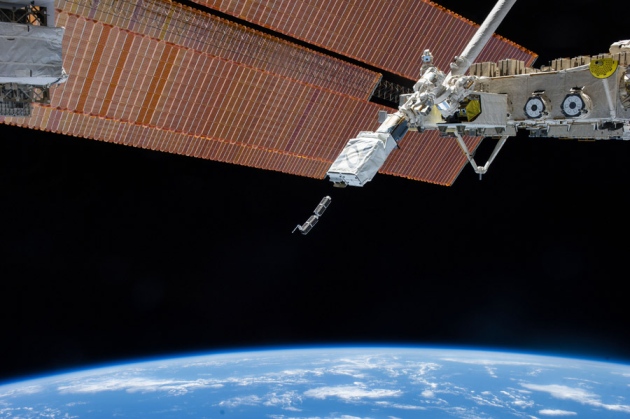 Two 30-centimetre-long Earth-observing CubeSats were released from the International Space Station in February.

A tiny box orbiting Earth is sending home big data. Built mostly by undergraduate students for less than US$1.5 million, the 10 centimetre × 10 cm × 30 cm satellite, called Firefly, is now beaming back information on terrestrial γ-ray flashes — energetic bursts that are triggered by lightning and fired out into space.

Firefly, which launched in November, is the first satellite devoted to studying the flashes, and scientists are eagerly awaiting the results. “I think this will be really amazing,” says Therese Moretto Jorgensen, a programme director in the geospace sciences division of the National Science Foundation (NSF) in Arlington, Virginia.

Firefly is part of a growing band of mini satellites known as CubeSats that are now coming into their scientific own. Thanks to cheap parts and free launches, CubeSat launches are booming. As scientists and engineers prepare to meet next week for their annual CubeSat Developers’ Workshop in San Luis Obispo, California, they are celebrating a record 63 deployments last year, nearly half the total of about 130 since launches began in 2003 (see ‘Good things in small packages’). Experts say that the machines are at last starting to tackle valuable science questions. “After ten years, they’re finally doing something more than just saying, ‘Hi, I’m alive’,” says space historian Jonathan McDowell at the Harvard-Smithsonian Center for Astrophysics in Cambridge, Massachusetts.

CubeSats have been deployed for everything from detecting the electromagnetic signals that might accompany earthquakes to monitoring the production of bacterial proteins in space. One mission is even planning to be the first to leave Earth’s orbit: INSPIRE, a pair of CubeSats that could launch as early as the end of this year. It will trek 1.5 million kilometres — 1% of the distance to the Sun — and, from there, map the charged particles of the solar wind that shoot out from the Sun.

CubeSats were invented in 1999 as an educational tool. They were designed to be small and simple enough for graduate students to build, and they had a standard size, to make it easy for rockets to accommodate them. Robert Twiggs, an aerospace engineer at Stanford University in California, and the satellite department at the California Polytechnic State Institute in San Luis Obispo designed a 10-cm-a-side box: just big enough for a communications unit, solar panels, a battery and a few extras. The total package weighs in at about 1 kilogram. The first CubeSats launched in 2003, when six projects hitched a ride on a Russian Eurockot launch vehicle for about $40,000 per cube.

The format took off. In 2010, NASA started a CubeSat Launch Initiative, which each year offers a free ride to a dozen or more successful applicants as hitchhikers on primary loads. The initiative has awarded launch spots to more than 100 projects, although only 24 have been successfully shot into orbit so far (the rest are on a waiting list). 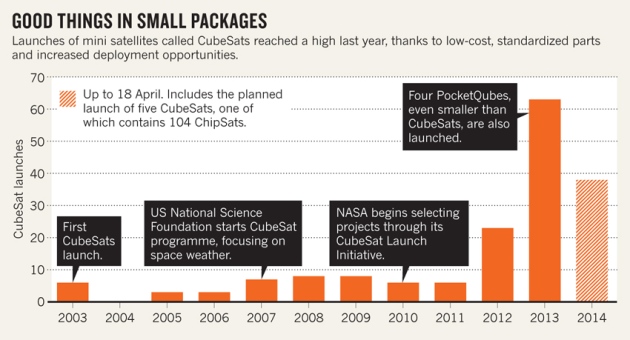 In 2012, another avenue into space opened up: deployment from the International Space Station (ISS). And CubeSat builders can continue to pay commercial launch suppliers such as SpaceX for rides that typically cost $80,000 per cube. The price has gone up since 2003, says Twiggs, because of increasing demand.

Meanwhile, about a dozen shops have sprung up to sell standardized parts. At one, Pumpkin in San Francisco, California, a chassis costs about $7,500; a solar panel around $2,500. An entire CubeSat can be built for less than $100,000, says Twiggs. “It depends whether you have free student slave labour or not.”

“I love the idea that I can basically get something at Walmart and fly it in a satellite.”

Such low costs prompted the NSF to start a programme in 2007 to encourage the use of CubeSats as a way to get more data more quickly than multimillion-dollar satellite missions. “It started, really, out of curiosity,” says Jorgensen, who manages the NSF CubeSat programme and who has been pleasantly surprised by the results. “In terms of the data we want for space weather, there’s actually very little that we cannot fit on a CubeSat.” The programme has funded ten missions so far, including Firefly, at about $900,000 each.

The NSF’s showcase mission was the RAX-2 satellite, which, like Firefly, was a three-CubeSat unit. It launched in 2011 and for 18 months measured ionosphere turbulence caused by solar storms. RAX-2 was designed to measure scattering in the signals from powerful ground-based radar transmitters that pass into space through the ionosphere.

The mission produced surprising data about how electrons in the upper atmosphere heat up, which should improve models of the effects that space weather has on satellites, says Jorgensen (H. Bahcivan et al. J. Geophys. Res. 119, 1233–1249; 2014). The RAX team is now putting together a proposal for a follow-on CubeSat mission, which would monitor the ionosphere’s scattering of television signals.

The INSPIRE project, more expensive at $5.5 million, will monitor solar effects closer to the Sun. As the satellite pair slowly separates, the units will map the turbulence in the solar wind at different scales. It will be the first time that turbulent features smaller than 10 kilometres have been measured, says Andrew Klesh, principal investigator of the INSPIRE project at the Jet Propulsion Laboratory in Pasadena, California. But much of the mission’s value, he says, will lie in simply proving that a CubeSat can survive, navigate and communicate outside Earth’s orbit. To ready the satellites, the team had to shrink a long-distance radio by an order of magnitude and build tiny cold-gas-firing thrusters, all in less than 20 months.

Private companies are also investing in CubeSats. Planet Labs in San Francisco — founded in 2010 by three former NASA scientists — launched an Earth-imaging system in February. The constellation consists of a record 28 satellites, each a three-cube unit, released from a dock on the ISS. By using so many satellites, says Twiggs, scientists can in theory get data on a given spot on Earth more than once a day, radically improving real-time monitoring. “This is the killer application for CubeSats,” he says. But without thrusters, it is unclear how well these satellites will spread out before they fall back to Earth, probably within a year. The company declined to comment on its data so far.

Leaders in the field are now pushing for a smaller standard size. In 2009, Twiggs slimmed a CubeSat down into a 5-cm-a-side ‘PocketQube’; the first four launched in November 2013. One of these demonstration projects, jokingly named $50SAT, cost just a few hundred dollars in parts — including a $14 chip for a two-way radio. “I love the idea that I can basically get something at Walmart and fly it in a satellite,” says Twiggs. For now, the smaller size lacks the larger model’s economies of scale in terms of parts and launch opportunities.

Some are favouring even smaller devices. On 18 April, a SpaceX rocket is set to take a $30,000 Kickstarter-funded CubeSat called KickSat to the ISS. About two weeks later, after KickSat is ejected from the ISS, 104 postage-stamp-sized ‘ChipSats’ will be released. Fitted with radio transmitters, the ChipSats were offered up for auction for about $300 each to anyone who wanted one.

For now, chip- and pocket-sized satellites can do little more than broadcast their location or a short message. But “things will evolve from gimmick to return fairly quickly”, predicts Jason Crusan, director of NASA’s Advanced Exploration Systems Division in Washington DC. Swarms of such satellites could provide a kaleidoscopic view of a target, or be treated as disposable missions.

Michael Johnson, a physicist and visiting fellow at the University of Bristol, UK, says that one idea is to study the rings of Saturn. “You can do that with a billion-dollar satellite that has to stay far away to be safe,” says Johnson, who is co-creator of the KickSat mission and founder of the company PocketSpacecraft.com. “Or you can fly 10,000 low-cost craft and land one” on one of the bigger pieces of rock in the rings, he says.

Johnson says that PocketSpacecraft.com is designing ChipSats so thin that they will not burn up on re-entry. That might allow researchers to map winds in Earth’s upper atmosphere, or land a network of accelerometers on the surface of Mars.

Jorgensen is yet to be convinced of the ChipSats’ usefulness. Still, she is keeping an open mind. “It’s hard to imagine they will be capable enough,” she says, “but that’s exactly what people said about CubeSats.”