Ash found in a South African cave hints that humans were cooking with fire one million years ago.

The discovery is the earliest evidence yet found for use of this revolutionary technology, say the researchers behind the finding. But some experts caution that more proof is needed before we conclude that humans were cooking regularly at this date. 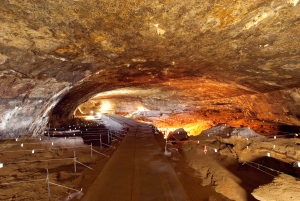 The plant and animal ash was found thirty metres inside the Wonderwerk Cave — beyond the reach of a lightning strike.

Francesco Berna, an archaeologist at Boston University in Massachusetts, and his colleagues found ash of burnt grass, leaves, brush and bone fragments in sediments 30 metres inside the Wonderwerk Cave in the Northern Cape province. The cave is one of the oldest known sites of human habitation, showing traces of having been lived in from almost two million years ago.

It is not possible to say for certain which species of hominin inhabited the cave one million years ago, but the team believes it was probably Homo erectus.

The bits of ash, which range from a few millimetres to a few centimetres long, are well preserved. They have jagged edges, showing that they were not burned elsewhere and blown or washed into the cave, which would have worn such edges away.

Berna and his colleagues searched the sediments for bat faeces, because large piles of rotting guano can become hot enough to ignite spontaneously. But there were no traces of such droppings.

“This left us with the conclusion that the fire had to have been created by hominins,” says Berna. The evidence is published today in Proceedings of the National Academy of Sciences1.

Cooking makes food easier to chew and digest, so the first humans to adopt it could get more energy from the same amount of food and spend less time foraging. But it has proved difficult to work out when humans made this leap.

Unlike stone tools, evidence of burning, such as ash and charcoal, is easily destroyed by wind and rain. And even when such remains are found, determining whether the fire was natural or human-made is tricky.

Burned materials have been found that date back to 1 million to 1.5 million years ago, at the Swartkrans site in South Africa2, and 700,000–800,000 years ago, at a site in Israel called Gesher Benot Ya`aqov3. But both these sites are in exposed spots, where lightning could have ignited the fire.

That could not have happened in the Wonderwerk Cave. But using fire and mastering it are not the same thing, cautions Wil Roebroeks, an archaeologist at Leiden University in the Netherlands.

“I think it likely that humans were using fire at this site, but I don’t think that this means these hominins were regular fire users. For a claim like that to be made, we would need to see hearths and fire places, and we do not,” he says. “If we were to discover many more fire sites at this time in history and find that natural cave fires look distinctly different, that would support an early-cooking hypothesis, but we are not there yet."

Paola Villa, an archaeologist at the University of Colorado Museum of Natural History in Boulder, argues that further searches are needed. “Isolated finds are not conclusive. For these arguments to stand up, the sediment layers of many different sites of the same time period need to be analysed,” she says.

Berna thinks that more evidence might be found. “The fire was only confirmed when the sediment was analysed at the microscopic level. It is possible that the reason we have not yet seen more evidence of early fire use is because we have not been using the appropriate methods,” he says.