Microbes have hit the big time. Results from major projects that aim to sequence the metagenome — the trillions of microbial cells and genes in the human body — potentially offer new ways of diagnosing and treating a wide range of health problems. But some researchers are warning against the dangers of hyping the data too soon.

In 2007, the US National Institutes of Health (NIH) committed US$140 million to the Human Microbiome Project, which examines all the microorganisms in the human body. The following year, the European Commission established the €22-million (US$29-million) Metagenomics of the Human Intestinal Tract project (MetaHIT), which focuses on gut bacteria. Findings from both efforts were presented at the International Human Microbiome Congress in Paris this week. 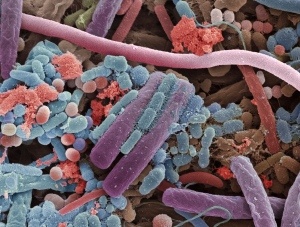 The genetic codes of microbes in the human body, such as these tongue bacteria (seen in a coloured scanning electron micrograph) could be the key to more accurate diagnosis.

Speaking at the conference, Julian Davies, a microbiologist at the University of British Columbia in Vancouver, described the quest to understand the microbiome as “the biggest life science project of all time”. He added, “Everyone will benefit if this project goes well and is done properly.”

These claims echo the enthusiasm that once surrounded another ‘big science’ initiative — the international Human Genome Project, which published its first draft of the human genetic sequence in 20011. In 1999, Francis Collins, then director of the US National Human Genome Research Institute in Bethesda, Maryland, and now director of the NIH, had written2 that the human genome sequence would allow researchers to “uncover the hereditary factors in virtually every disease”, “foretell future disease” and “adapt therapies to the individual patient”.

But the promised advances have been slow to arrive. On the tenth anniversary of the publication of the draft, an editorial in Nature noted that its promise is “still to be fulfilled” (see ‘Best is yet to come’).

Jonathan Eisen, a microbiologist at University of California, Davis, is worried that microbiome research will eventually encounter the same backlash. “Without a doubt we are running into some of the same problems as the Human Genome Project,” he says. “There are many people who have oversold the human microbiome as the cause or cure of everything.” Eisen worries that although numerous connections have been discovered between the microbiome and diseases, it is usually unclear whether the microbes caused the conditions or merely exploited a new environment.

“There’s sensitivity about the expected returns,” says David Relman, who studies infectious disease at Stanford University in Palo Alto, California. “We need to be grounded about what it is we’ll be able to gain at what point in time. I think the shorter-term gains may be around diagnostics, and novel ways of classifying both health and disease.”

These gains are already becoming apparent. At the Paris conference, Jens Nielsen, a systems biologist at Chalmers University of Technology in Gothenburg, Sweden, showed that the gut’s microbial genes may be a better predictor of type 2 diabetes than established risk factors such as waist–hip ratio or body mass index. Other researchers presented results from MetaHIT that suggest that gut bacteria are more accurate markers for leanness or obesity than any of our own genetic variants.

Rob Knight, a microbiologist at the University of Colorado Boulder, hopes that microbiome will be similarly effective at classifying inflammatory bowel diseases such as Crohn’s disease or ulcerative colitis, in which “gradations are subtle and people are often misdiagnosed”.

The metagenome differs from person to person much more than the genome does, which may be the key to its diagnostic potential. “There’s a 0.1% difference in our genomes, but there may be a 50% difference in our metagenome,” says Dusko Ehrlich, a project coordinator for MetaHIT. “If the variability is higher, you’re more likely to find a relevant signal.”

Knight predicts that the microbiome will also prove easier to influence than the genome. “If you want to get rid of bacteria, pharmaceutical companies have thousands of compounds that could target them,” he says. By contrast, finding drugs that target disease-related genes, or altering those genes outright, is more difficult.

Attempts to modulate the microbiome are already under way, although big advances have not yet arrived. One study published last year3 showed that probiotic yoghurt affects gut bacteria only subtly (see ‘Friendly bacteria move in mysterious ways’). "Cocktails of classic probiotics, which people have been trying for years, may have some benefit but the effect seems to be quite small,” says Relman. A targeted approach that manipulates specific species could be more effective, but, Relman adds, “I don’t think we’re there yet”.

“Let’s be careful and cautious,” agrees Ehrlich. “These are early days, but I think there is great potential in what we see now.” He adds, “But you can never, ever avoid disappointing people because they always want more.”