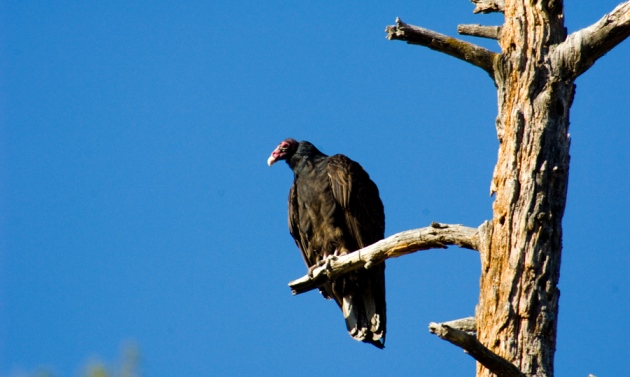 Turkey vultures have hundreds of species of bacteria on their faces and relatively few — but unusually aggressive ones — in their guts.

Regular meals of rotting flesh would poison most animals. But vultures seem to have adapted by producing unusually destructive gastric juices, and by hosting a gut flora that helps them to prosper on a diet of carrion, a study of the birds' microbial communities suggests.

Vultures — both the New World ones that live in the Americas and the similar but unrelated ones found in Europe, Asia and Africa — are notorious scavengers, circling the skies on the lookout for decomposing creatures. But after an animal dies, microbes that had been kept in check in its body during life run amok and spew out toxic compounds. Soil-dwelling pathogens such as the Bacillus anthracis, which causes anthrax, can join in.

To understand how the birds can eat such dangerous meals, Lars Hansen, a microbiologist at Aarhus University in Roskilde, Denmark, and his team analysed the microbes growing in the guts and on the faces of two species of New World vulture: black vultures (Coragyps atratus) and turkey vultures (Cathartes aura). They worked with 26 black vultures and 24 turkey vultures that had been killed by US federal officials as part of population-control efforts in Nashville, Tennessee.

Vultures are enthusiastic eaters, sinking their faces deep into the corpses they eat. It was little surprise, then, that their faces turned out to be microbiological menageries, each boasting DNA from, on average, more than 500 species of microbe, as well as from cows, horses, pigs and other mammals.

But when the researchers looked at the birds' guts, they found many fewer microbes — 76 species, on average, compared to the hundreds typically found in humans. There was also no sign of DNA from the birds' meals, the team reports in Nature Communications1. “The vultures’ stomachs are extremely harsh environments, frying everything that passes through,” says Hansen. “Even the prey DNA does not pass through.”

The microbes that do thrive in vultures’ guts are dominated by two types of bacterium: Clostridia (which often produce toxins, including the one that causes botulism) and Fusobacteria, some of which are flesh-eating. Hansen says that the birds could be immune to these pathogens and the toxins they produce or, alternatively, vultures might fill their guts with harmless relatives of pathogenic Clostridia and Fusobacteria, which have lost the genes that cause disease. "They kind of work like a probiotic. They occupy the same niches that the pathogens would,” says Hansen. His team plans to do more in-depth DNA sequencing of the vulture microbiome to determine the answer.

Last year, a study of the gut microbiome of alligators, also carrion eaters, found high levels of the same two bacteria2. “I don’t think it’s coincidence,” says Sarah Keenan, a geobiologist at Saint Louis University in Missouri who led that study. ”The fact that both of these vertebrates are scavengers, and they’re eating things that are likely to be partially decomposed — that suggests they’ve developed this microbiome that allows them to thrive.”