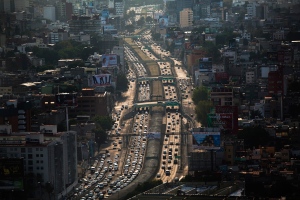 As the 11th largest emitter of carbon worldwide, Mexico has passed a law requiring a 50% reduction in emissions below 2000 levels over the next 40 years.

The Mexican legislature passed one of the strongest national climate-change laws so far on 19 April. Mexico, which ranks 11th in the world for both the size of its economy and its level of carbon emissions, joins the United Kingdom in having legally binding emissions goals aimed at stemming the effects of climate change.

After three years of debate and revisions, the bill passed in Mexico’s lower house with a vote of 128 for and 10 against, and was later passed unanimously by the Senate. The new law contains many sweeping provisions to mitigate climate change, including a mandate to reduce emissions of carbon dioxide by 30% below business-as-usual levels by 2020, and by 50% below 2000 levels by 2050.

Furthermore, it stipulates that 35% of the country's electricity should come from renewable sources by 2024, and requires mandatory emissions reporting by the country's largest polluters. The act also establishes a commission to oversee implementation, and encourages development of a carbon-trading scheme. Although there was initial resistance from Mexico's steel and cement industries, the bill passed with bipartisan support.

Experts say that Mexico's climate bill reflects a global trend in which individual states and countries, frustrated with stalled United Nations climate agreements, have begun implementing their own emissions regulations.

“It’s at the domestic level that the rubber hits the road. The actions we need to see at this stage are more in the nation’s capitals than in the UN negotiations,” says Elliot Diringer, vice-president of the Center for Climate and Energy Solutions in Arlington, Virginia. “The international regime is not very effective at driving domestic action. And that was the theory behind Kyoto.”

In recent years, countries such as Australia, South Korea and China have all taken steps to create their own standards and goals for mitigating climate change, including the establishment of carbon markets. Although some observers have called this a failure of multinational climate agreements such as the Kyoto Protocol, others say that it is a more effective 'portfolio' approach, whereby a suite of different plans spread risks across individual countries.

“These sorts of things actually make me feel very positive,” says Mark Maslin, a geographer at University College London. He suggests that Mexico taking the lead on climate change is probably more important than the UK doing so, noting that many observers would expect Britain to take a stance on climate: “It's very easy to look ... and say 'they are a bunch of liberals, they care about the planet and they can afford to'.”

Despite the rosy assessments, however, this portfolio approach may face some of the same hurdles as the international efforts. “We’re very good at making laws. And then the problem is enforcing them,” says Juan Bezaury, an expert in Mexican public policy with the Nature Conservancy in Arlington. He adds that the new law is “only the first phase of a complete legal overhaul for Mexico. It deals with the environment, it deals with energy, it deals with human settlements, it deals with health issues, it deals with a whole lot of stuff”.

He compares the bill to a skeleton on which many other laws must be hung. One of those is Mexico’s REDD+ policy (for Reducing Emissions from Deforestation and Degradation). The policy creates a monetary value for carbon in forests, and attempts to give people living in those regions a financial incentive to preserve rather than cut down virgin forest — either by being paid to save the trees or by harvesting sustainably. But REDD programmes have been dogged by controversy over the models used to calculate the value of carbon in forests, and over how the scheme is run.

“The projected carbon savings are created through modelling. And those models have a lot of uncertainty,” says Ana Peña del Valle, a scientist at the National Autonomous University of Mexico (UNAM), the country’s largest university. “We have quite a bit of concern with the way the risks related to REDD are shared between sellers and buyers. Because so far, the risk schemes are focused more on protecting the buyers.”

Despite concerns about Mexico’s ability to enforce the legislation, experts point out that the bill can already be seen as a successful response to the 2010 UN Climate Change Conference in Cancún.

“Mexico was widely credited for helping to rescue the international effort in Cancún. But some noted the lack of corresponding action domestically. Now Mexico has something to show at home too,” says Diringer.

An earlier version of this story incorrectly stated that Mexico's new climate bill stipulates that 35% of the country's energy, rather than electricity, should come from renewable sources by 2024.