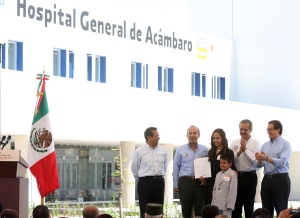 Mexico's president, Felipe Calderón, inaugurating the General Hospital in the city of Acámbaro.

A revamp of Mexico’s beleaguered health-care system is proving to be a runaway success and offers a model for other nations seeking to reform their own systems, according to a review published this week in The Lancet1. The key to the scheme’s success is the way in which it has modified its reforms in response to scientific assessments of their effectiveness, the authors say.

Launched in a law in 2003, the Mexican scheme was designed to sort out widespread inefficiencies and inconsistencies in the country's health-care system. Some 50 million Mexicans — nearly half the country’s population — who previously were not covered by health insurance are now enrolled, leading the scheme’s architects to claim that the country has near-universal health-care coverage.

“The reform was very much motivated by the fragmentation of the system; the injustice and inequity of having where you work determine whether or not you were covered,” says Felicia Marie Knaul of the Harvard Global Equity Initiative in Boston, Massachusetts, a co-author on the review.

Determination to remove those inequalities saw the programme survive the tough economic times. “Even through the throes of severe economic crisis, the government never stopped funding the law,” says Knaul.

At its core, the 2003 legislation set up a national health insurance programme called Seguro Popular, intended to cover everyone in Mexico who was not already covered by another programme. As well as the increased coverage, the scheme has seen the number of conditions treated under Mexican public health insurance nearly quintuple.

Former health minister Julio Frenk, who is now dean of the Harvard School of Public Health and is a co-author on the paper, says that the success is the result of two factors. First, the programme piggybacked on an existing social programme, called Oportunidades, that provides cash transfers to the poor. By having its administrators head out into slums, towns and villages with workers on Oportunidades, Seguro Popular enrolled many families that would otherwise never have known it existed. Second, Seguro Popular has been modified over its nine-year existence in response to scientific evidence on its effects on the nation’s health2, 3. 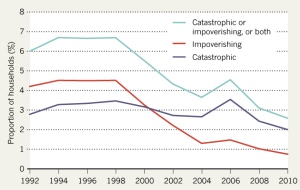 Trends in medical expenditure in Mexico between 1992 and 2010, defined as economically catastophic for a household (adding up to at least 30% of capacity to pay), or impoverishing.

“Very often evaluation is an afterthought and then it’s too late,” says Frenk. But the law explicitly included requirements to gather and act on evidence about which benefits should be covered, and how the scheme's effects should be evaluated, he notes.

Knaul and Frenk acknowledge that the system still isn’t perfect. Service at Seguro Popular clinics is often woefully poor, particularly in rural areas, and some important long-term conditions are still not covered.

One problem that needs to be addressed is the low wages that Mexican doctors receive. Despite a long history of producing top class physicians, the country on average still pays its doctors less than US$37,000, just one-quarter of the earnings of their US counterparts according to the Organisation for Economic Co-operation and Development.

“Most of us, once we finish working here, go to work in the afternoon in the private system,” says Juan Talavera, a physician with the Mexican Social Security Institute in Mexico City. “And if people have to work in two places, they get burned out because they are working all the time.”