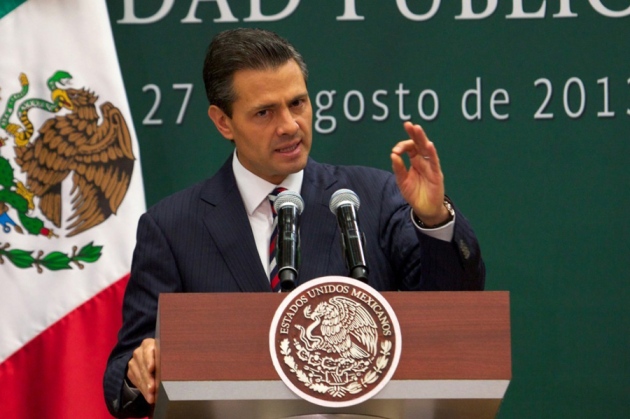 It has the world’s 11th-biggest economy and is home to the largest university in the Western Hemisphere. But for all that, Mexico has had surprisingly little influence on global science output and innovation. Its annual rates of patents and spending on science lie below those of Brazil, its chief Latin American competitor.

But when Enrique Peña Nieto was sworn in as president last December, he promised to grease the rusty wheels of Mexico’s science and technology infrastructure. And one year in, he has started to deliver.

On 13 November, the Mexican Congress approved a 20% rise in the 2014 budget of the National Council for Science and Technology (CONACYT) in Mexico City, the country’s main research funding agency. Congress increased the country’s overall science budget by 12%, to 82 billion pesos (US$6.3 billion). Peña Nieto is also pushing several other pieces of legislation through the pipeline: an intellectual-property bill that would allow researchers and universities to commercialize their publicly funded work; a bill that would reform the academic retirement system and encourage talented young researchers to stay in Mexico; and tax breaks that could incentivize private investment in research and development.

As head of the party that dominates both houses of Congress, Peña Nieto is in a strong position. By the end of his six-year term, he wants Mexico’s combined public and private spending on science and technology to rise to at least 1% of gross domestic product (GDP). For years, the country’s spending has languished at a level of about 0.4%. By comparison, Brazil spends more than 1% of its GDP on science and technology and the United States almost 3% (see ‘Peso power’).

“Since the campaign, as a president-elect, and finally when he took office, President Peña Nieto has made clear that science, technology and innovation would be central for economic development and social well-being,”says Gabriela Dutrénit, head of the Scientific and Technological Advisory Forum, a prominent independent science think tank in Mexico City. She says that last week’s budget would put the nation on track to reach spending of almost 0.55% of GDP in 2014 — a pace not quite fast enough to reach 1% in 2018, but still an important first step. 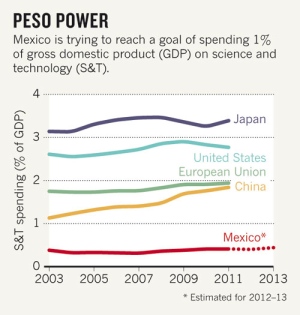 One of the most important signs of change might not be a policy, but the creation of a scientific institution. Within days of taking office, Peña Nieto tweeted that he would form an executive-branch office modelled on the US Office of Science and Technology Policy, to advise the president on scientific matters, coordinate policies between science ministries and propose legal reforms. In April, Peña Nieto chose as its head Francisco Bolívar Zapata, a former president of the Mexican Academy of Sciences and a biotechnologist who helped to start the company Genentech in San Francisco, California, and has worked on engineering bacteria to produce human insulin. In an interview with Nature, Bolívar says that he pushed for science to be included in Mexico’s 2013–18 development plan. About 30% of that plan’s 800-plus lines of action are related directly or indirectly to science, he says.

Congress is now turning to an intellectual-property bill. Patents in Mexico are complicated and expensive, and scientists working in public research centres cannot make money on them. But a proposed law modelled on the 1980 US Bayh–Dole Act would give researchers and universities the right to develop commercial products based on publicly funded research. Rubén Félix Hays, a member of Congress who presides over the science and technology committee, says that a group of legislators is actively working on the bill.

Tony Payan, who specializes in Mexican studies at Rice University in Houston, Texas, says that the patent reform would be a good first step. But he adds that this needs to be followed by changes in the judicial system, which rarely enforces laws on intellectual-property rights. “If somebody violated your patent and you found out that they are marketing a product that is very similar to the one that you hold a patent to, what court would you go to? Where would you sue?” asks Payan.

Another problem is Mexico’s massive brain drain. The reason why many scientists leave the country is clear enough: jobs are hard to come by. Scientists tend to stay in their jobs for as long as possible, because leaving means giving up most of their salaries. “We don’t retire,” says Bolívar. “We don’t free some positions for young scientists.”

To that end, the Congress is working on a bill that would boost pensions for retiring researchers. Félix says that the process might take some time. “We don’t want to harm the rights of the professors, but we need a reform so the new generations can have access and refresh the system,” he says. CONACYT also plans to create 500 new science jobs for young researchers in 2014. The jobs will be in fields such as climate research, disaster mitigation, diabetes and plant genetics. Bolívar says that the government plans to follow the first batch with 500 more each year.

However, Payan says that it will take a long time to achieve a culture of innovation, and that merely replacing the old with the young will not suffice. “You can retire a bunch of guys and you can put in the new people to work,” he says. “That doesn’t mean they’re going to innovate.”

By itself, a boost in public spending on science will not be enough for Mexico to achieve its goal of 1% of GDP; private investment is also needed. To encourage this, Bolívar has enlisted the help of Enrique Cabrero Mendoza, who was appointed head of CONACYT in January. A competitiveness expert at the Center for Research and Teaching in Economics in Mexico City, Cabrero has identified cities throughout the country that are ripe for investment as technology hubs. The government wants to offer corporate tax breaks to encourage investment in these hubs — although tax breaks have been controversial in the past because they have been abused.

Peña Nieto has started to run into opposition to this and other parts of his agenda. Major reforms in education and energy policy — such as compulsory teacher evaluations and opening up the state-owned oil company to private investment — have sparked large protests in the streets, supported by powerful unions.

Even if Peña Nieto has trouble enacting all of his research agenda, his symbolic actions have already impressed Dutrénit. She points out, for instance, that in September the president reconvened a high-level scientific advisory body — the General Council for Scientific Research, Technological Development and Innovation — headed by himself and nine ministers, as well as officials from CONACYT, universities and businesses. The council was created in 2002 to help set national science and innovation policy. It is supposed to meet twice yearly, but had met only three times in the past ten years.

The government’s renewed focus on science is spurring a sense of responsibility among Mexico’s scientific elite, Dutrénit adds. “We are not only asking for increases in public and private investment,” she says. “We also have to answer for those investments.”