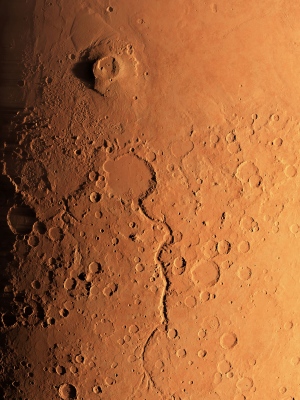 A new meteorite resembles the rocks analysed by the Spirit rover at Mars's 90-kilometer-wide Gusev crater (centre in this artist's impression).

It may just look like your average rock, but in fact it's an extra-special delivery from the red planet. Laboratory analysis has revealed that a specimen bought from a Moroccan meteorite dealer in 2011 is the first sample of Martian origin that is similar to the water-rich rocks examined by NASA’s rovers.

The meteorite, dubbed Northwest Africa (NWA) 7034, contains a concentration of water by weight about ten times higher than in any of the other 100 or so known Martian meteorites — those rare rocks that get ejected from the Martian surface into space when an asteroid hits the planet, and eventually find their way to Earth. It’s also the only known Martian sample on Earth that hails from a critical period, about 2 billion years ago, when Mars is thought to have become colder and drier than it was originally.

Carl Agee of the University of New Mexico in Albuquerque and his colleagues report their findings from samples of the meteorite in Science online today1.

“Agee and his collaborators have thrown open the door to a whole new part of Mars,” says planetary scientist Munir Humayun at Florida State University in Tallahassee, who was not involved in the study. The meteorite, he adds, is “the first of a new class of Martian meteorites that provides more direct clues to the surface history of Mars.”

Moreover, Humayun says, NWA 7034 may provide the only direct corroboration for the rovers’ observations for some time to come, as the fate of a long-delayed mission to bring samples of Mars back to Earth is still uncertain. 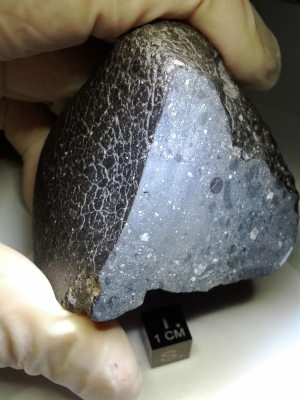 The rock, found in the Sahara Desert, has a higher water content than any Martian meteorite previously analysed.

The elemental composition of the meteorite strongly resembles that of rocks examined in 2005 by NASA’s Spirit rover at Gusev Crater2. Those rocks showed evidence of chemical alteration by interactions with liquid water, notes Agee. The composition of NWA 7034 also matches that of rocks studied by Curiosity, NASA’s newest rover, as described in preliminary reports from members of that mission.

Dating from 2.1 billion years ago, NWA 7034 is the second-oldest Martian meteorite, and provides a "missing link" in the planet’s geological record, according to Agee. (The oldest prospective Martian meteorite, ALH 84001, is 4.5 billion years old, whereas all other Martian meteorites are 1.3 billion years old or younger.) Several lines of evidence indicate that parts of Mars were warmer and wetter, and therefore a possible haven for carbon-based life, some 4 billion years ago. The relatively high water content of NWA 7034, which could be as much as 0.6% by weight, suggests that “crustal or surface processes involving water may have lasted” well beyond the 4-billion-year mark, Agee adds.

That is not a surprise, given the map of hydrogen (a stand-in for water) generated by an instrument on the Mars Odyssey orbiting spacecraft and the presence of small amounts of water in younger Martian meteorites, notes Harry McSween at the University of Tennessee in Knoxville.

The meteorite is made of volcanic rock, and the presence of water in it suggests that crustal rocks on Mars interacted with surface water that was delivered by volcanic activity, near-surface reservoirs or by impacting comets, Agee says. But Jeffrey Taylor of the University of Hawaii in Honolulu says that whether that water content truly reveals an abundance of surface water on Mars 2.1 billion years ago awaits further study.