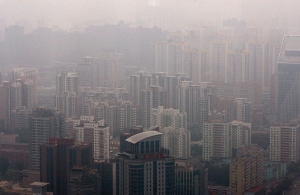 Rapid urbanization will take a heavy toll on public health if city planning and development do not incorporate measures to tackle air pollution, warns a report launched in Beijing last month.

The report1, compiled by the World Meteorological Organization (WMO) in Geneva, Switzerland, and the International Global Atmospheric Chemistry (IGAC) project in Boulder, Colorado, was launched as part of the IGAC Open Science Conference on Atmospheric Chemistry in the Anthropocene. A striking point in the report, says Liisa Jalkanen, head of the WMO’s Atmospheric Environment Research Division, is how quickly megacities — metropolitan areas with populations of more than 10 million — are rising in developing countries.

There are now 23 megacities in the world, compared with just two 60 years ago. Just over half of the population currently dwells in cities, and with the urban population expected to nearly double by 2050, that proportion is projected to approach 70%. “Almost all this growth will take place in the developing world,” says Jalkanen.

Megacities “have better job and education opportunities, and well-planned, densely populated areas can reduce land conversion and use energy more efficiently”, says Luisa Molina, president of the Molina Center for Strategic Studies in Energy and Environment in La Jolla, California.

“But many cities in developing countries are expanding rapidly with poor planning and few pollution-reduction measures,” says Zhu Tong, an atmospheric scientist at Peking University in Beijing. “This is having serious consequences on the environment and public health.”

Asia, for instance, has more than half of the world’s most-polluted cities, and air pollution contributes to half a million deaths each year in the region, according to a recent report by the Asian Development Bank2. More than two-thirds of Asian cities — compared with just one-fifth in the rest of the world — fail to meet the European Union’s air-quality standard for particulate pollutants.

“Part of the problem is the pace of development,” says Zhu. The population of city dwellers in China has risen almost five-fold since 1950, sending energy consumption skyrocketing and putting millions of cars on the roads, contributing to pollution hot-spots such as the notorious ‘Beijing smog’.

Levels of the air pollutants responsible for respiratory and heart diseases are high and rising in Beijing. Ground-level ozone concentrations have risen six-fold in the past three decades, with current levels typically twice the standard set by the US Environmental Protection Agency (EPA), according to David Parrish, an atmospheric scientist at the National Oceanic and Atmospheric Administration in Boulder, Colorado.

The concentrations of PM2.5 — airborne particles 2.5 micrometres or less in diameter — typically range between 100 and 150 micrograms per cubic metre of Beijing's air, which is six to ten times higher than the EPA standard. “The health impact can be enormous,” says Andre Nel, an environmental scientist at the University of California, Los Angeles. By one estimate, mortality increases by 1% for every 10-microgram-per-cubic-metre increase of PM2.5 in big cities, he says.

In February, China’s State Council introduced legislation aimed at curbing ozone and PM2.5 levels, as well as other emissions. The standards, which must be implemented by 2016, are similar to, or in some cases higher than, their counterparts in the United States and the European Union. The move follows regulations introduced in 1996 that helped to significantly reduce emissions such as sulphur dioxide and carbon monoxide by adopting vehicle-emission standards and promoting the use of natural gas and low-sulphur coal, says Shao Min, an atmospheric scientist at Peking University.

"To meet these new standards, especially for ozone and PM2.5, a strategic shift in pollution-reduction measures will be required," says Shao. Unlike sulphuric dioxide and carbon monoxide, which are directly emitted by their sources, ozone and PM2.5 are secondary pollutants that are formed by chemical reactions between a range of different precursors in the atmosphere. “This means we should cast our net much wider rather than focusing on just a few precursors,” says Shao.

Beijing has the most stringent emission controls in China, but a significant fraction of its pollutants come from surrounding regions, says Zhu. During the 2008 Beijing Olympics, for instance, air masses from the south could contribute to 34-88% of peak ozone concentrations in the city. “Beijing’s air quality will not be significantly improved unless the current measures are able to break administrative boundaries,” says Zhu.

Beijing’s approach should be applied in other large cities in the developing world, researchers said at the conference. Otherwise, “megacities will become a main source of global pollution”, says Molina. “How governments meet the challenges of rapid urbanization will determine the quality of life in the future.”