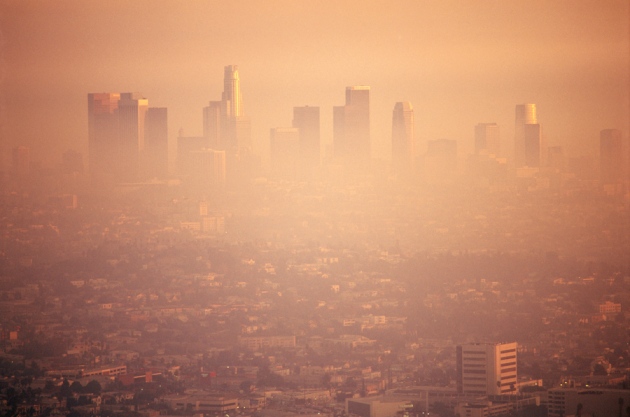 Cities such as Los Angeles produce plumes of pollution that contain greenhouse gases.

At the top of Mount Wilson in southern California, an infrared sensor scans the horizon, silently mapping carbon dioxide levels across Los Angeles. In the city below, scientists fire lasers into the sky to measure the daily rise and fall of a dome of pollution that caps the valley. Other instruments perched on towers are set to track air as it flows into the city and out again, laden with emissions. Eventually, instrumented aircraft will join the effort. Once the operation is fully under way in 2013, the CO2 that Los Angeles exhales will be monitored and quantified to a degree well beyond that of any other major city.

United Nations data suggest that cities are responsible for some 70% of global greenhouse-gas emissions and that countries with high urbanization rates emit more CO2 per capita (see ‘Urban emitters’). By closely tracking emissions in Los Angeles and other mega­cities, researchers hope to test greenhouse-gas monitoring systems that may one day allow scientists to gauge the success of local — and, ultimately, national — climate initiatives. Early results presented this week at the American Geophysical Union meeting in San Francisco, California, offer promising signs that such independent verification is possible through a combination of atmospheric measurements and modelling. 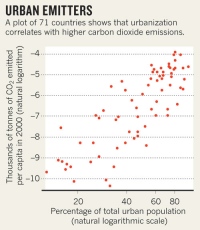 “Megacity emissions are both important and scientifically tractable,” says Riley Duren, a systems engineer who is spearheading the monitoring initiative at NASA’s Jet Propulsion Laboratory (JPL) in Pasadena, California. Scientists might be a couple of decades away from being able to track all anthropogenic greenhouse-gas emissions at high resolution from space, Duren says, “but the technology exists today to go after the emissions of cities”.

Duren and his partners have linked up with French researchers who are monitoring emissions in Paris, and the team is also discussing a similar project in São Paulo, Brazil. In Indiana­polis, a monitoring programme has been up and running since 2010. These projects arose when mandatory climate regulations seemed likely for many countries; that expectation has since faded, but scientific interest in monitoring and verification has only increased.

Turning to the atmosphere to verify emissions estimates — which are typically based on industry reports of energy consumption — is far from trivial. Cities produce plumes of pollution that scientists must characterize as the plumes evolve and disperse downwind. To convert atmospheric concentrations of greenhouse gases into emissions, researchers must understand local meteorology and trace emissions back to their sources.

Working with state, academic and private partners, the Los Angeles team aims to have 13 monitoring stations on towers within six months. These will track air moving through the basin while balloons and lasers measure the boundary between the pollution that sits over the city and the cleaner air above. This boundary determines the volume of air that scientists are investigating, and thus the relationship between measured concentrations of CO2 and overall emissions. At sunrise each day, the polluted air warms and rises, mixing with cleaner air and escaping over the mountains that ring the city. All of this information will be plugged into a high-resolution model that can be used essentially to track these atmospheric processes backwards and forwards through time to understand the greenhouse-gas measurements.

The approach builds on the Indianapolis project. Paul Shepson, an atmospheric chemist at Purdue University in West Lafayette, Indiana, led a team that received about US$1.5 million from the National Institute of Standards and Technology (NIST) in 2009 to set up the experiment. The team deployed a pair of towers to measure air as it entered and exited Indianapolis, and Shepson augmented those measurements with detailed assessments from aircraft. With further funding, the team expects eventually to encircle Indianapolis with a dozen towers to measure CO2 and methane.

“It’s a great city for a test case, isolated and flat as a pancake,” says Shepson.

He reckons that his initial calculations come within 30–40% of the city’s stated CO2 emissions. He expects to reduce that uncertainty to 20% by incorporating data from the towers in a high-resolution emissions model developed by atmospheric scientist Kevin Gurney, a co-investigator on the project who is based at Arizona State University in Tempe. Team members are due to present initial results at the San Francisco meeting this week.

Gurney’s model incorporates real data about energy use: industrial activities at the level of individual buildings together with traffic patterns. Vehicles are classified by the type of fuel used and emissions produced,and are simulated moving throughout the city much as normal vehicles would. Gurney foresees a day when the combined results of the greenhouse-gas measurements and modelling will enable cities to pinpoint methane emissions from natural-gas leaks, for example, or identify neighbourhoods that would benefit from traffic initiatives or projects to make existing buildings more energy efficient.

“I’ve had mayors calling me, and they all pretty much say the same thing: where do we start?” says Gurney, who has already applied the model to Phoenix in Arizona and is now adapting it to Los Angeles. “If you are going to spend money,” Gurney adds, “you need to know where to do it.”

This is why Los Angeles has bought into the monitoring programme. Committed to reducing its emissions to 35% below 1990 levels by 2030, the city has pursued a range of initiatives, from cracking down on shipping emissions and ramping up renewable energy to installing more-efficient streetlights and synchronizing traffic lights. “We’re doing what we can, but we want to make sure that what we are doing is actually working,” says Romel Pascual, Los Angeles’ deputy mayor for the environment.

NIST has invested about $1.1 million in the Los Angeles initiative in the hope of advancing the science and making it more applicable to other cities. The goal is to reduce the overall uncertainty in calculating emissions to 10%.

The final phase will extend this effort into space. The sensor currently installed on Mount Wilson is a prototype of a next-generation instrument that could eventually be launched on a satellite, says Charles Miller, a colleague of Duren’s at the JPL. Tuned to near-infrared wavelengths, the sensor measures the proportion of the heat being absorbed by CO2, and thus the CO2 concentration in the atmosphere. Ultimately, Miller and Duren envisage a trio of geostationary satellites that would allow constant surveillance of greenhouse-gas emissions — not just over Los Angeles, but around the planet. “This is a completely wide open and untested area,” Miller says, “but one with great promise.”

The source for the graphic ‘Urban emitters’ was originally given as the UN Report on Human Settlements 2011. Although graph does appear there, it is actually from research published in 2008. The source details have no been updated.