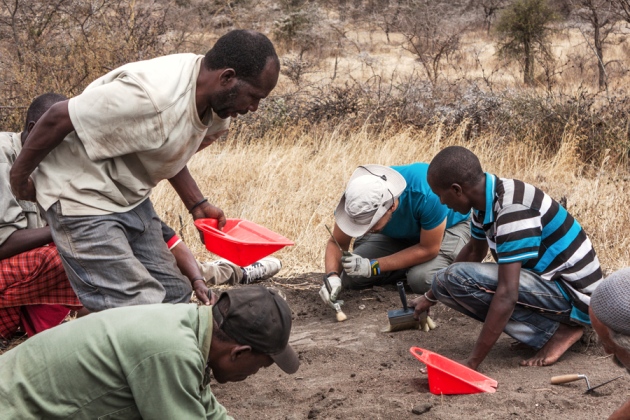 Researchers work around footprints discovered at the Laetoli site in Tanzania.

The sound was more like a squish than a thud, as the tall male australopith strode across the East African savannah. A volcanic eruption had left a patina of grey ash underfoot, while rainstorms that followed transformed the earth into wet cement. Squish, squish. Four smaller individuals walked not far behind. Squish, squish, squish. Later, ash rained down from the sky again, covering their tracks for 3.66 million years.

How much can a trail of footprints reveal about their owners? Reporter Ewen Callaway finds out.

The first traces of this journey — tracks from three individuals that are the oldest-known footprints of any ancient human relative — were discovered in the 1970s in northern Tanzania by the anthropologist Mary Leakey and her team1. Now, 40 years later, researchers have found more hominin footprints at the world-famous site, called Laetoli. They comprise tracks from two more individuals, including those of a man who would have weighed 48 kilograms and stood 1.65 metres tall, larger than any other Australopithecus in the fossil record. Researchers have named him Chewie, after the 2-metre-tall Star Wars character Chewbacca. (The Swahili word for leopard, chui, is also pronounced in a similar way, they note).

The new Laetoli footprints, described in a 14 December study in the journal eLife2, suggest that early hominins may have had a social structure similar to that of gorillas, in which a large male dominates a group of smaller females. The prints also raise tough questions about how to stop the impressions from eroding away, scientists say.

The new tracks were discovered because of efforts to preserve the original 23-metre-long trail of footprints. They are threatened by tree roots, water and erosion and have been covered with soil for protection for most of the time since the 1990s. The Tanzanian government had approved a plan to build a museum at the site, including a protective covering for the tracks. In preparation, archaeologist Fidelis Masao, at the University of Dar es Salaam in Tanzania, dug trenches to survey the area and in October 2014 uncovered a large hominin footprint. Further excavations — at a site 150 metres from the original prints — found 12 more large prints, creating a 32-metre-long track, and an additional footprint from a smaller individual.

The newly-found Australopithecus footprints at the Laetoli site.

The original Laetoli prints have been attributed to Australopithecus afarensis — the same species as the 3.2-million-year-old remains from Ethiopia known as Lucy — and Masao and Cherin’s team think the new prints were probably made by individuals in the same social group.  Both sets of prints were made by individuals walking in the same north-westerly direction, and probably during a single trip, Masao and his colleagues suggest. They were found in the same layer of volcano ash and, therefore, were likely created by identical conditions.

“It’s really amazing to think about this group walking in the same direction with the same speed,” says Marco Cherin, a vertebrate palaeontologist at the University of Perugia, Italy, who co-led the study. "Walking to where, we don’t know. They were probably just walking like all the other animals who left their footprints in Laetoli.”

Chewie's footprints stand out as much larger than the others: they are 27 centimetres long, nearly as long as Cherin's size 10 (UK) feet. Cherin says the new footprints point to much greater variation in body size among early hominins than previously suspected, while challenging the idea that they evolved large bodies only when their brains grew bigger in the past 2.5 million years. His team estimates that the other individuals at Laetoli would have stood between 1.11 m and 1.49 m tall. 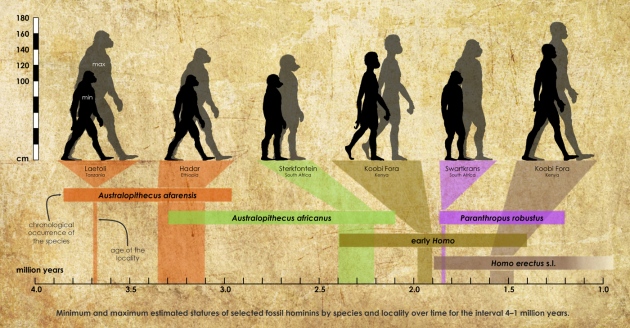 This chart shows the tallest and smallest fossil hominins on record — by species — between 1 and 4 million years ago.

The range of body sizes at Laetoli may also relate to the social structure of the hominins there. The team suggests that the largest prints were made by an adult male, whereas the other prints belong to two adult females and two juveniles or smaller females. Gorilla groups, in which a silverback male associates with a harem of much smaller females and their offspring, show a similarly wide range of body sizes, notes Cherin, who thinks that australopiths may have adopted a similar setup.

But Neil Roach, a palaeoanthropologist at Harvard University in Cambridge, Massachusetts, says the relationship between social structure and body-size differences between sexes is not so clear-cut. Nevertheless, he thinks the new tracks support current thinking that A. afarensis was a species that lived in groups composed of multiple males and females, and that there were large differences in body sizes between the sexes.

Bruce Latimer, a palaeoanthropologist at Case Western Reserve University in Cleveland, Ohio, agrees that conclusions about Australopithecus social groups should be taken with a pinch of salt. But Latimer, who has worked on the original prints, calls the new set “a dramatic and exciting discovery” that adds to evidence that individuals at Laetoli had feet that were not so different from those of present-day humans. “The Laetoli prints would not attract attention on a modern beach,” he adds.

Plans for the museum are on hold while researchers look for more footprints and examine the state of the original tracks, says Charles Musiba, an anthropologist at the University of Colorado, Denver, who is involved with the conservation efforts. The current plan, he says, is to build research and education facilities outside a 1.5-kilometre buffer zone from the site, while investigating the best place for a museum to protect and display the footprints, which have all been reburied. “We’re going to leave them the way they are for now,” Musiba says.

After Masao discovered the newest prints, he says the first person he phoned was Richard Leakey, one of the sons of Mary Leakey (who died in 1996). “He said ‘Well, Fidelis, much as I congratulate you, I also pity you. Nature has preserved them for 4 million years. How will you make sure they stay intact for millions of years to come?’” Masao says. “I did not have an answer.”