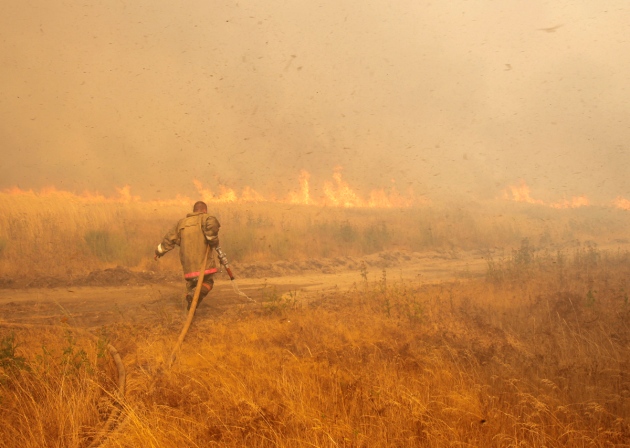 The 'mega-heatwaves' that parched Europe in 2003 and Russia in 2010 were exacerbated by a vicious feedback loop between soil and atmosphere, researchers report today in Nature Geoscience1. Drying ground added more heat into air close to Earth's surface, a process that repeated over time to produce record-breaking warmth that shrivelled crops, set forests ablaze and claimed tens of thousands of lives.

Without the extraordinarily dry surface and the anomalous high-pressure conditions in the lowest level of the atmosphere occurring at the same time, the extreme, persistent hot spells wouldn’t have occurred, says paper co-author Diego Miralles, a climate hydrologist at Ghent University in Belgium.

Climate scientists looking for triggers of such events have identified high-pressure atmospheric patterns and a feedback loop between drying soil and rising air temperatures as probable suspects2, 3. But Miralles and his team clarified the interaction among these factors by analyzing a broader range of data, including temperature readings from weather balloons and satellite measurements of soil moisture taken before and during the heatwaves.

The study shows that soil drying is the key link in the intensification of mega-heatwaves, says Dara Entekhabi, a hydrologist at the Massachusetts Institute of Technology in Cambridge. The work “dissects the phenomena better than previous studies,” showing the anatomy and evolution of the extreme heat events, he adds.

Too hot to handle

Summer heatwaves arise when high-pressure systems linger over an area and trap heat near the ground. The result is clear skies, little rain and punishing temperatures until the system moves on, which can take days or weeks.

The mega-heatwaves began in a similar manner, with one key difference: each started over areas with low soil moisture. That soil became even drier in the initial heat, which then pumped more warmth into the air above. That heated surface air then rose into the atmospheric boundary layer — the lowest level of the troposphere — doubling its height to more than 4 kilometres, and creating a thick blanket of heat. The cycle began anew each morning.

“The heat doesn’t dissipate at night, so you start from where you left off the day before,” says Miralles.

The work could bolster climate modellers’ efforts to depict the way soil moisture and vegetation interact with the atmosphere, says Kevin Trenberth, a climatologist at the US National Center for Atmospheric Research in Boulder, Colorado.

But the study does not tell the whole story. Because it focused on local phenomena, the analysis cannot fully explain why a dome of high pressure stagnated in one place for so long in the European and Russian events. Nor does it address whether climate change will make mega-heatwaves more frequent or more intense.

Other studies suggest the probability of deadly heatwaves on this scale will become 5–10 times more likely in coming years4. “If we expect to have more drier summers in the future,” says Miralles, “we will be more vulnerable to more mega-heatwaves.”