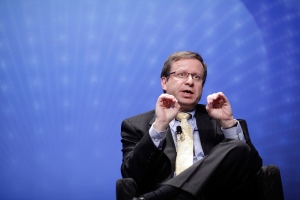 Steven Koonin’s latest career move might be his most unpredictable yet. Last November, the theoretical physicist resigned as under secretary of science at the US Department of Energy (DOE), a position that followed jobs as chief scientist at the oil company BP and provost of the California Institute of Technology in Pasadena. As provost of the new Center for Urban Science and Progress to be created by New York University in Brooklyn this year, Koonin will apply his problem-solving skills to cities, by partnering academics with corporations and city agencies. Against a background of shouts and car horns echoing up from the streets of Manhattan, Koonin spoke to Nature about how to ameliorate urban problems.

What were the highlights of your time at the DOE?

I had a wonderful team of people to work with, so I’ll miss that. And another highlight was leading the formulation of the first Quadrennial Technology Review, which asked ‘what should the DOE be doing in energy technology research?’ I enjoyed synthesizing the views of the various stakeholders — from academia, corporations and other for-profit businesses, labs, non-governmental agencies  and  government agencies — and feel satisfied in having produced a quality document.

Why have you bounced between academia, industry and the government?

The different sectors have very different cultures, and if the United States is going to be competitive in the next few decades, we need to learn how to better fuse those cultures together, respecting their different goals. In the private sector, the goal is to make money legally and predictably — there’s nothing wrong with that — and there is a hierarchy. In a university, it’s the opposite. The goals are diffuse and the organizational structure is that the faculty is in charge. But the federal government has the worst of both worlds — a consensus-driven organization with goals — so it moves very slowly.

What can New York City offer that Obama’s administration could not?

The federal government has been a little ineffective in energy policy in the past 30 years, and part of that is due to the diversity of the country. One of the things that attracted me to New York City is that there are more common interests in cities, and city governments touch lives directly. The fact that the city runs a transit system that almost everyone uses every day means that people care about what the city does. In a city, there is an opportunity to have an immediate effect.

Why lead a new centre with no reputation, rather than head to the Ivy League?

Look, if I had gone to be a professor at a university, I would spend a long time talking about this notion — using information technology to improve the operation of cities and to inform the social sciences — rather than doing it. If you want to change the energy system, for example, technology is not enough. The infrastructure for energy changes slowly because it’s designed to last a long time, but we can do information overlays on top of the energy structure, and that can improve things dramatically. I learned this at BP, where I saw how non-technical factors must come together to turn a new technology into a viable business. That sentiment got reinforced during my time with the government.

What kind of faculty will you hire?

People who know how to build sensors for building conditions and energy use, people who can handle administrative records, people who know how to integrate data into graphical information systems, and people who know how to do data mining and modeling, to name a few. For example, can someone build models of corroding bridges and predict when the bridge needs maintenance? We need projects that will be executed in conjunction with our corporate partners such as IBM and Siemens, and with the public sector. Transport will be an obvious thing to go after, as well as grid management. I think there are wonderful opportunities for masters' students to work with some of the best corporations and with city agencies in a major city, and to get degrees in disciplines that solve real problems.

How do you feel about your return to New York?

I grew up in Brooklyn and left when I was 16. Even though I lived in suburban Pasadena for 30 years, I still prefer the city. Most people live in cities, so if you want to solve big problems, that’s where you need to go. People who are interested in environmental models say, it’s the only planet we’ve got. But that’s so abstract. If you say, this is my neighborhood and I want to make it better, to me that’s much more compelling.