A decades-long surge in the numbers of US biomedical postdocs may finally have ended.

From 1979 to 2010 the number of US postdocs in the biomedical sciences has risen steadily, from just over 10,000 to more than 40,000. But in the past three years, the tide has turned, according to official statistics.

The population of US biomedical postdocs fell 5.5% between 2010 and 2013, to just under 38,000, with losses getting bigger each year, notes a study published on 6 October — although the number of new graduates with science PhDs continues to rise (see chart). 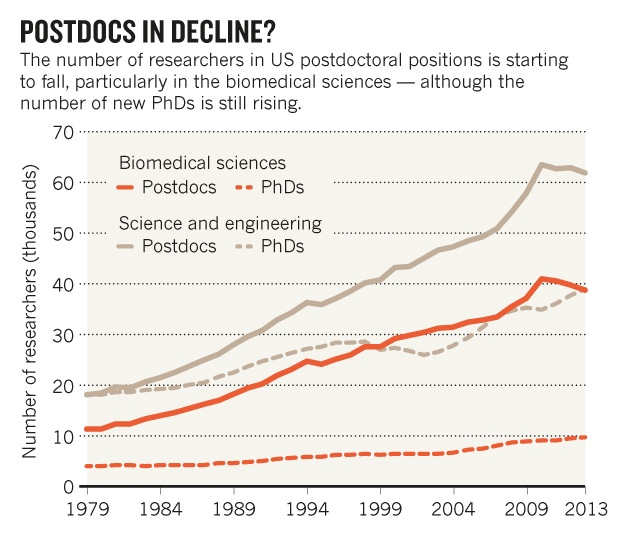 The main reason for the fall seems to be fewer positions available for postdocs, but the time that individuals spend as postdocs is also shrinking, says Howard Garrison, lead author of the report and deputy executive director for policy at the Federation of American Societies for Experimental Biology in Bethesda, Maryland, which published the work in its journal.

The future of the postdoc

“We’d been watching these data for thirty years and they just kept going up. When I saw it go down, the first year, I thought it was a blip. But three years in a row of steady decreases seems to be an unprecedented situation,” says Garrison.

He thinks that the numbers are driven by the budget for the National Institutes of Health. The number of federal grants provided by the agency fell sharply in 2011 and 2012, he says.

A report by the National Academies of Sciences in December 2014 bewailed the current status of postdocs, saying that too many new PhDs were toiling away in positions that would not advance their careers. Greg Petsko, a neuroscientist at Weill Cornell Medical College in New York City, and the author of that report, agrees that the numbers may signal a market correction. “Now that graduate students may finally be getting a more realistic perspective on their chances for academic employment, the pool of postdocs may start to decline,” he says.

Life outside the lab: The ones who got away

But he remains to be convinced that the decline is real. Postdocs’ official titles and sources of support vary widely, making this population difficult to track. His team found that many institutions were not sure how many postdocs they had.

The data on postdocs comes from the US National Science Foundation Survey of Graduate Students and Postdoctorates. This counts only postdocs at degree-granting institutions and so does not reflect scientists working in government, industry or non-academic research institutions. Numbers of both foreign and US scientists working as postdocs in the United States shrank, as did the numbers of both male and female postdocs. The biggest decline was in US men, whose numbers fell by 10.4% over the 3 years.

Garrison says that it is unclear whether the trends are bad news for young researchers. “Since most will end up outside the laboratory sooner or later, one interpretation is that they are just taking a more direct route to the next stage of their career,” he says. “But for consumers of research, this probably means that there is less science being done.”