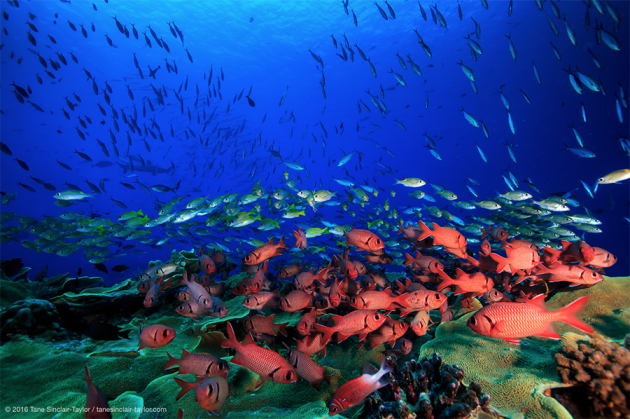 The number and type of fish found on a reef are an indicator of coral health.

It has been a bleak year for the world’s coral. Ecologists have watched in horror as unusually warm ocean temperatures have prompted corals to ‘bleach’, or expel the symbiotic algae that provide much of their food. The result has been death and damage to reefs from Kiribati in the Pacific to the Indian Ocean's Maldives.

With such episodes projected to occur more often even if climate change is mitigated, researchers are redoubling efforts to identify the factors that can make a reef resilient to harsh conditions. An analysis published this week in Nature points to some answers1.

The study identifies 15 ‘bright spots’ where ecosystems are in a much better shape than researchers had predicted they should be. These include unpopulated, unfished regions such as the Chagos Islands in the Indian Ocean, and areas that are close to towns and where fishing takes place — such as Kiribati and the Solomon Islands, also in the Pacific. The study also pinpoints 35 ‘dark spots’ where conditions were surprisingly poor, such as Montego Bay in Jamaica and Lord Howe Island between Australia and New Zealand.

The research team, led by Joshua Cinner, a social scientist who studies coral-reef systems at the Australian Research Council Centre of Excellence for Coral Reef Studies at James Cook University in Townsville, Australia, based its analysis on data that describe conditions at more than 2,500 reefs. The researchers used information on a reef’s habitat, depth, nearby human population and amount of fishing to model how many fish could live at each site.

The bright spots shared several characteristics, including high levels of local engagement in resource management, high dependence on local marine resources, and protective cultural taboos — such as excluding fishers from outside the local village.

Cinner’s work also suggests that the proximity of urban centres is a key driver of change in marine systems. It can damage reef systems that seem to be performing well to the naked eye, such as sites in the northwestern Hawaiian Islands that are part of a well-policed marine reserve but are still classified as a dark spot.

“Marine reserves will never be enough,” says Cinner, who presented his results on 6 June at a meeting in London organized by the Central Caribbean Marine Institute. Instead, he says, the creation and maintenance of reserves should be coupled with other efforts to reduce threats to reefs.

Emily Darling, a marine conservation scientist at the Wildlife Conservation Society, an environmental group in New York, calls the study impressive. “It’s absolutely a novel approach that brings together ecological and social information, and bridges approaches from human health and development to conservation,” she says. “Identifying what conditions create bright spots is incredibly hopeful for coral-reef conservation and sustainable fisheries.”

Cinner's work was among a number of coral studies presented at last week's meeting, which aimed to shake up the community of scientists who study corals, and catalyse a push for solutions to the avert the decline of these ecosystems.

Terry Hughes, director of the coral-reef centre at James Cook University, says that the 2016 bleaching events have given researchers new motivation to seek solutions. “They’re seeing a level of damage they haven’t seen before.”

He argues that current methods to promote reef sustainability are falling short. Even Australia’s Great Barrier Reef, widely considered to be the best-managed reef ecosystem in the world, is suffering. The latest estimate from Hughes’s centre, released on 30 May, suggests that this year’s bleaching has killed 35% of corals at 84 survey sites on the northern and central Great Barrier Reef.

Gareth Williams, who researches remote reefs from Bangor University, UK, told the meeting that modelling work currently under review suggests that even if the world manages to reduce its greenhouse-gas emissions, many reefs will bleach annually by 2030. Corals can recover from mild to moderate bleaching, but severe bleaching is deadly and repeated bleaching will likely cause drastic changes to the ecosystem in the long term.“I don’t think we can save them all,” Williams said. “Some reefs are just going to go. Investing in those will be a waste of time and resources.”

Many participants at the meeting agreed that the research community needs to shift from cataloguing the decline of reefs to finding ways to encourage their resilience to climate change.

“We’ve stood by for the last 25 years trying to understand what’s happening and watching coral reefs die globally,” said Carrie Manfrino, research director at the Cayman Islands-based Central Caribbean Marine Institute, which organized the meting. What’s needed now, she told the audience, is “to establish a new road map that can give us a future”.

Tom Frazer, a meeting attendee and director of the School of Natural Resources and Environment at the University of Florida in Gainsville, says that it is a positive sign that there are some reefs that have proven to be resilient to human-induced change or to have recovered from disturbances such as bleaching or cyclones.

“These are bright spots and provide hope for the future,” said Frazer — adding that social factors such as behavioural change and innovative governance for marine systems are going to be “absolutely essential” to saving reefs.