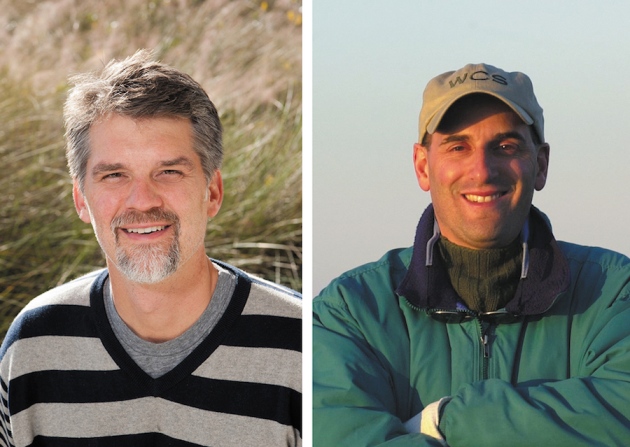 An international group of scientists is calling for stricter regulations to protect marine wildlife from noise pollution. In a study1 published last week in the journal Frontiers in Ecology and the Environment, researchers argue that action is needed to tackle excessive ocean noise from industrial activities such as shipping and seismic surveys, which use loud sound pulses fired from compressed air guns to explore the sea floor and find natural resources.

Nature asked two authors of the study, conservation ecologists Douglas Nowacek at the Duke University Marine Laboratory in Beaufort, North Carolina, and Howard Rosenbaum at the Wildlife Conservation Society in New York City, why this is such an urgent problem. This interview has been edited for length and clarity.

From underwater, the sound of an air gun fired from a survey ship (along with pulses to monitor the ship's depth).

Douglas Nowacek (DN): One concern is hearing damage in animals. That can happen either with very loud sounds or over longer periods of exposure to lower levels of noise. Also, with air guns, the reverberations raise the background noise level and so risk masking animals’ communication and navigation signals. A final concern is stress. Short-term stress is not that big a deal, but long-term stress is really detrimental. It causes physiological and reproductive problems; and we don’t know a lot about how sensitive marine animals are to it.

Howard Rosenbaum (HR): Effects have been documented across a range of species, from bowhead whales in the Arctic2, 3, 4 and sperm whales in the Gulf of Mexico5, to herring in the North Sea6. There are still questions out there about what these impacts mean in the long term for individual animals or populations, but there’s an increasing body of evidence.

HR: The requirements vary from region to region. In many places around the world, surveyors must slowly ramp up the air-gun strength at the beginning of a survey, to warn off animals in the area, but we really don’t know how effective this practice is. Surveyors might be required to limit their operations in areas where endangered animals are present or have been previously observed, and shut down if animals enter a certain zone. The overall benefits from many of these measures are still really unknown. We feel that more needs to be done to safeguard marine species and their most important habitats.

What do you suggest?

DN: First, we are calling for restrictions on activities in biologically sensitive habitats, based on data. In an ideal world, you would want to have a good inventory of data on the marine animals present in a region and when these animals breed, spawn and feed. Then you would use that information to decide when to survey, and check afterwards whether there had been any unforeseen outcomes. Second, we want overall noise limits based on monitoring that counts cumulative contributions to noise. The Australian Ocean Data Network Portal is a good example of this kind of data collection. The European Union has proposed putting limits on overall noise, but the United States doesn’t consider the cumulative impact of all activities when giving out survey permits.

HR: Third, there are already new techniques that use steady streams of energy at lower levels than air guns and which might help to reduce risks to marine species. Fourth, we think that intergovernmental science coordination is critical because it’s a transboundary problem. Finally, we want to see the effects of cumulative noise incorporated into environmental-impact assessments.

Should some seismic surveying be banned?

DN:  No. For the foreseeable future, seismic is a tool being used to find oil and gas at sea and, at lower amplitudes, to site wind farms, but you need to use it wisely. In the United States, the issue of redundant surveys is ridiculous. I can tell you from my experience of being out on the water in the Gulf of Mexico — on any given day, there may be 6, 8, 10 or 12 surveys going on nearby.

For the Atlantic, the US authorities are considering whether to permit multiple companies to carry out exploratory seismic surveys off the coast. One of the affected regions near Cape Hatteras happens to be the most diverse and richest area for cetaceans in the northwest Atlantic. To go out there and survey the same piece of water over and over again is ridiculous. Norway has instituted multi-client surveys, in which companies that are interested in seismic data from a particular area get together so that only one survey is done.

How will you persuade the international community to agree on regulations?

DN: The EU’s Marine Strategy Framework Directive is trying to limit overall noise to a certain level, taking into account all sources. They are currently taking an inventory of shipping noise in many areas, with plans to then seek methods to reduce the noise, particularly in biologically sensitive areas. We are earnestly looking for a forum, or a way to start talking about this and to create some standards internationally. One possible way of creating a legally binding instrument to restrict noise pollution to an acceptable level is to add an annex for noise pollution to MARPOL [the International Convention for the Prevention of Pollution from Ships], similar to the newly added annex on air pollution.

Do you think industry and regulatory authorities will agree with your recommendations?

HR: We are presenting peer-reviewed science that shows the extent of the issue. Industry or governments may not fully agree with what we suggest is a responsible way forward, but it’s something that we feel could be very beneficial for industry and regulators as well — especially a standard set of 'best practices' for mitigating impacts on marine species and their habitats.