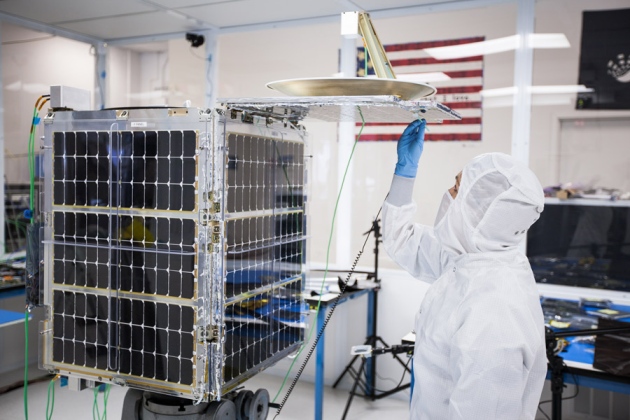 Skybox Imaging plans to launch 24 high-resolution SkySats in the next few years.

Imagine using Google Earth or other online mapping tools to zoom in on high-resolution satellite images of the planet taken just hours or days ago. Navigating backwards and forwards in time, one could track changes in everything from crops, forests and wildlife movement to urban sprawl and natural disasters, all with unrivalled temporal precision.

This is the vision of two Californian start-up companies that are set to launch swarms of small imaging satellites, which, by virtue of their sheer numbers, will be able to revisit and photograph huge swathes of the planet as often as several times each day — a frequency much higher than that achieved by current Earth-observing satellites.

San Francisco-based Planet Labs, founded in 2010 by three former NASA scientists, is scheduled to launch 28 of its ‘Doves’ on 8 January. Each toaster-sized device weighs about 5 kilograms and can take images at a resolution of 3–5 metres.

At Skybox Imaging in nearby Palo Alto, plans are afoot for a swarm of 24 satellites, each weighing about 100 kilograms, which will take images of 1 metre resolution or better. Skybox launched its first satellite on 21 November and plans to launch another this year, followed by the remainder between 2015 and 2017.

In a first — at least for civilian satellites — Skybox’s devices will also stream short segments of near-live high-resolution video footage of the planet. So, too, will UrtheCast, a start-up based in Vancouver, Canada, whose cameras will hitch a ride on the International Space Station (see 'Earth goes under video surveillance').

Companies plan to stream near-live high-resolution video of the planet from space.

The International Space Station is set to host an unusual external component. In the coming days, a 32-centimetre-aperture video camera will be bolted to the side of one of its modules and pointed not into space, but straight down at Earth. The device, one of the first of its kind to be launched in space, will then begin streaming high-definition colour videos of Earth on the Web in near-real time.

The camera will be operated by UrtheCast, a start-up company based in Vancouver, Canada, which has gained access to the space station through a deal with the Russian Federal Space Agency. It is one of two companies aiming to deliver up-to-date video footage of Earth from space for the first time. The other, Skybox Imaging, a start-up company based in Palo Alto, California, will deliver panchromatic video from its planned swarm of 24 satellites (see main text). Both will produce video at about 1 metre resolution, fine enough to make out individual moving vehicles, crowds of people and groups of animals.

Cosmonauts carried out a spacewalk on 27 December to mount UretheCast's video camera on the hull of the Russian Zvezda module, following its arrival on board a Russian cargo vessel on 2 December. They also installed a multi-spectra camera, which UrtheCast will use to stream live 5 metre resolution still images. The cameras were built by the Rutherford Appleton Laboratory in Didcot, UK. Unfortunately, both devices had to be dismounted after a power problem, but this has now been resolved and the cameras will probably be reinstalled before the end of January. Skybox Imaging has had better luck; it launched its first satellite in November and has since made public videos taken by the craft.

When the cameras are fully up and running, both companies will target commercial markets, such as the media and organizations wishing to monitor traffic, ports and industrial plants. UrtheCast will also make its streams free to the public on its website, and hopes to capitalize on the large number of hits it expects its website to attract. For example, one can imagine the global interest there would have been had regular space video footage of the Fukushima nuclear disaster been available, says Scott Larson, UrtheCast’s chief executive.

Other applications of space video include the monitoring of floods, post-earthquake zones and other natural disasters and humanitarian crises, Larson says. UrtheCast will help to do just that through an agreement reached with the United Nations’ Operational Satellite Applications Programme (UNOSAT), which delivers satellite imagery to the UN and other organizations involved in relief and development operations.

Potential scientific applications of space video include observing volcanic eruptions, forest fires, hurricanes and the movement of wildlife, although the scientific potential of space video is not yet clear. "People will use these tools in ways we haven’t even thought of yet," predicts Larson.

However, the projects have limitations. Skybox Imaging's satellite and the space station hurtle along at thousands of kilometres an hour in their low Earth orbits, so video footage of any one place will inevitably be fleeting. Both companies intend to use steerable cameras to briefly lock their focus on selected targets, and so acquire 60–90-second video sequences of individual locations.

Satellites are therefore no match for high-altitude drones, which can circle and provide continuous video footage of the same location. But using drones to monitor events across the globe requires operators to gain permission to access countries’ airspace, notes Larson. And drones may not be located near a site of interest when, for example, a natural disaster hits. By contrast, satellite eyes in the sky need no permission to fly, and have access to even the most remote zones.

The efforts could herald a sea change for imaging. Conventional imaging satellites, which are the size of a van and weigh tonnes, cost hundreds of millions of dollars to build and launch (see ‘The swarm cometh’). As a result, there are only a handful of operators, and the commercial world fleet comprises fewer than 20 satellites. Commercial satellites also tend to take pictures mainly when their operators receive orders from customers. 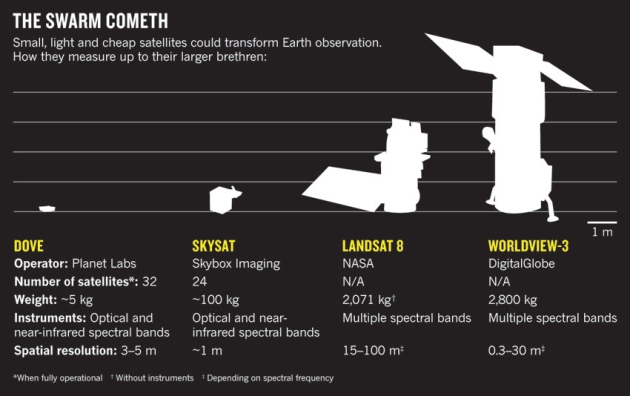 By contrast, the swarm satellites’ cameras will always be on, photographing everything in their path and, owing to their numbers, will pass over the same points on Earth with a frequency of hours to a few days, depending on latitude.

The biggest customers of conventional commercial imaging satellites are governments, in particular intelligence agencies and the military. Prices can be prohibitive for many other potential users, including researchers, in areas as diverse as farming, forest carbon management, regional and local planning, and environmental stewardship. By making their images cheaper, the new entrants into the marketplace hope to spur a proliferation of innovative uses. They also hope to offer heavy discounts or even make imagery free to academics and non-governmental organizations.

“This sector has for so long been driven by government requirements and, to a lesser extent, big industry players, that the mass-market consumer — the long tail — has been almost completely neglected,” says Scott Larson, chief executive of UrtheCast. Cheaper imagery, he says, will lead to “the democratization of near-real-time Earth-observation data”.

To slash costs, Planet Labs and Skybox Imaging use off-the-shelf technologies from the automotive, smartphone and other consumer industries — including low-cost electronics, and sensors from high-end digital cameras. Using the latest technologies from these fast-paced industries also allows the rapid, continuous development of better and better satellites, says Will Marshall, chief executive of Planet Labs. And miniaturizing satellites reduces launch costs.

Because the swarms are still to be launched, scientists have yet to fully assess the quality of the imagery. But the satellites’ spatial resolutions of 1–5 metres are much higher than those of most scientific satellites. Landsat, NASA’s Earth-observation workhorse, for example, has a resolution of 15–100 metres depending on the spectral frequency, with 30 metres in the visible-light range.

Such medium-resolution imagery is adequate for many purposes, but higher resolution can have benefits, says Dan Berkenstock, co-founder and chief product officer of Skybox Imaging. He points to a study published in November that found that the use of moderate-resolution Landsat imagery greatly underestimated forest loss in the Democratic Republic of the Congo (A. Tyukavina et al. Environ. Res. Lett. 8, 044039; 2013).

Precision agriculture, a method that uses remote sensing to aid farm management, will also benefit from swarms, says Berkenstock, because the technology will be able to provide timely crop-yield and health estimates down to the level of rows of plants. Such detail could inform decisions on fertilizer and irrigation use, but is currently out of reach of most farmers.

However, spatial resolution is only part of the picture, says Mike Wulder, a researcher at the Canadian Forest Service in Victoria and a member of the Landsat science team. He uses remote sensing to study forests, and notes that good spectral and radiometric resolution (detection of small differences in wavelength and radiation, respectively), are essential for quantitative scientific analyses. “These very small satellites should not be expected to provide data that are similar or in competition with full-blown Earth-observing satellites,” he says. “They occupy a different niche.”

The scientific value of the swarm data will be “radically dependent” on quality issues, says Greg Asner, an Earth scientist at the Carnegie Institution for Science in Stanford, California. Stitching together such frequent-repeat imagery from so many satellites will be challenging, because performance will probably differ between satellites and vary over time, he argues.

But he is nonetheless excited at the prospect of constantly updated fresh imagery. “It will almost be like updating Google Earth each day,” he says.

After Nature went to press, space weather and solar flares delayed the scheduled launch of the Dove satellites until 9 January.