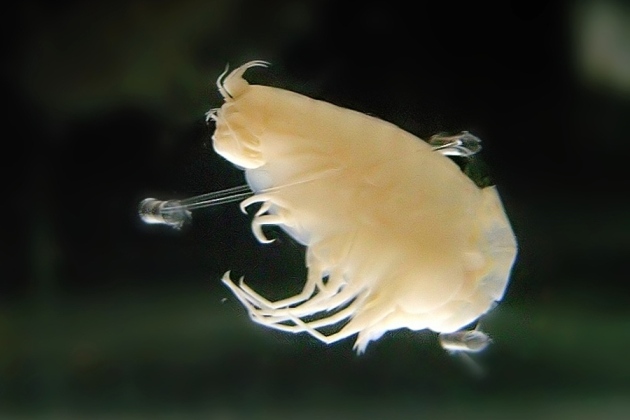 High levels of man-made pollutants have been found in the shrimp-like creature Hirondellea gigas (pictured), which lives in the deep-ocean Mariana Trench.

Toxic chemicals are accumulating in marine creatures in Earth’s deepest oceanic trenches, the first measurements of organic pollutants in these regions have revealed.

“We often think deep-sea trenches are remote and pristine, untouched by humans,” says Alan Jamieson, a deep-ocean researcher at the University of Aberdeen, UK. But Jamieson and his colleagues have found man-made organic pollutants at high levels in shrimp-like crustaceans called amphipods that they collected from two deep-ocean trenches, he told a conference on deep-ocean exploration in Shanghai on 8 June.

“It’s really surprising to find pollutants so deep in the ocean at such high concentrations,” says Jeffrey Drazen, a marine ecologist at the University of Hawaii in Honolulu.

Before this work — which has not yet been published — the study of pollutants in deep-sea organisms had been limited to those that live at depths of 2,000 metres or less1, 2. The latest research tested for levels of organic chemicals in amphipods collected at 7,000–10,000 metres depth, from the Mariana Trench in the western Pacific Ocean — the world’s deepest trench — and from the Kermadec Trench near New Zealand.

The creatures were captured during two international expeditions in 2014, when researchers lowered uncrewed landers into the trenches as part of a research programme to study deep-ocean ecosystems, sponsored by the US National Science Foundation.

In both trenches, the amphipods contained polychlorinated biphenyls (PCBs) — used to make plastics and as anti-fouling agents to stop barnacles growing on ships' hulls — and polybrominated diphenyl ethers (PBDEs), which are used as flame retardants.

Both chemicals are man-made and belong to a category of carbon-based compounds called persistent organic pollutants (POPs) because they are hard to break down. Production of PCBs — which are carcinogens — has been banned in many countries since the late 1970s; PBDEs, which animal studies suggest may disrupt hormone systems and interfere with neural development, are only now being phased out.

The concentrations of PCBs in the amphipods from the Mariana Trench were particularly high, and 15 times greater than those found in the Kermadec. “It’s even higher than in the estuaries of two of the most polluted rivers — the Pearl River and the Liao River — in China,” says Jamieson.

By contrast, the Kermadec Trench contains PBDEs at concentrations five times greater than the Mariana — and at a level that is higher than in the coastal waters of New Zealand’s North Island, the study finds.

Douglas Bartlett, a deep-sea microbiologist at the Scripps Institution of Oceanography in San Diego, California, says that the discovery is fascinating. “It hits home very dramatically that the trenches are not that remote after all, and the world is all connected,” he says.

“The take-home message is that when you dump rubbish into the sea, it will ultimately sink. When [pollutants] fall into the trenches, they have nowhere else to go. So they’re just going to keep building up,” says Jamieson. Eventually, the trenches will have higher levels of pollutants than in estuaries, where chemicals are constantly flushed out to open waters, he says.

The researchers suspect that the proximity of the Mariana Trench to large plastic manufacturers in Asia, as well as to a long-term US military base on the island of Guam, may have contributed to its high PCB levels. The waters above the trench are also part of the North Pacific gyre, a system of strong swirling ocean currents that might be sucking materials on the surface down into the deep sea. Both the Mariana and Kermadec trenches are around 11 kilometres deep. “It sounds quite deep, but it’s not in terms of pollutant transport,” says Jamieson.

The high POP levels are a cause for concern, researchers say. The deep-ocean canyons are “untapped natural resources” — a potential supply of organisms that could be valuable for a range of commercial applications, including drug discovery, but which might be affected by the pollutants, says Drazen.

Scientists think that deep-ocean trenches could also be an important carbon sink, playing a key part in regulating climate, Bartlett says. In part, that is because in the trenches, carbon is pushed deep into Earth's interior when one tectonic plate is thrust underneath another. The trenches are also teeming with microbes that may convert carbon-containing chemicals into forms that aren’t easily converted into carbon dioxide.

“If somehow microbial activities are adversely affected because of all this pollution, I’d wonder what that’s doing to the carbon cycle in general,” says Bartlett.