Why are there no more woolly mammoths? The last isolated island populations of these huge beasts disappeared about 4,000 years ago — well after the Pleistocene extinction that wiped out much of the world’s megafauna — but what triggered their demise remains a frustrating mystery. According to the latest study to contribute to the ongoing debate, the last mammoths disappeared after a long, slow decline in numbers rather than because of a single cause. 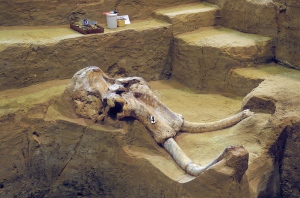 The various ages and locations of woolly mammoth bones reveal that they went extinct over a long period of time rather than all at once.

Woolly mammoths (Mammuthus primigenius) once roamed over cold, dry grasslands in the Northern Hemisphere called mammoth steppe. Their remains are especially common in Beringia, the bridge of land that connects eastern Russia and western Alaska. Now, palaeoecologist Glen MacDonald at the University of California, Los Angeles, and his colleagues have tracked the pattern of the Beringian mammoth’s extinction. Their results are published today in Nature Communications1.

MacDonald and his colleagues combined a geographical database of mammoth finds with radiocarbon dates for mammoth specimens, prehistoric plants and archaeological sites to follow how woolly mammoth ranges expanded and contracted during the past 45,000 years.

The team found that woolly mammoth populations waxed and waned as the cold climate of the Pleistocene gave way to a warmer, wetter one. Between the time of the oldest mammoths in the study and the end of the Last Glacial Maximum, around 20,000 years ago, northern populations of mammoths declined while populations in Siberia’s interior increased.

Then, following the Younger Dryas period around 11,500 years ago, woolly mammoths became concentrated in the north and some were isolated on islands before a warmer climate replaced the mammoth steppe with conifer forests, peat bogs and birch shrubland. The island mammoths were the last holdout of a gradual extinction that had already taken place on the mainland, the authors say.

“No one event can be blamed for the extinction,” MacDonald explains. Climate change drastically altered the mammoths' habitats, causing their populations to shrink. Prehistoric humans who were moving through Beringia at the time might also have played a part by hunting the remaining mammoths. That suggestion is backed up by a previous study showing that human predators could have hastened the extinction of slow-breeding mammoths that were already weakened by environmental change2.

Palaeontologist Ross MacPhee of the American Museum of Natural History, New York, isn’t so sure about the details of MacDonald’s pattern of mammoth decline. Some of the Russian samples analysed by the team, he points out, were dated using old techniques and need to be reinvestigated.

Nevertheless, MacPhee notes that the study fits the general picture that mammoths “died out over an appreciable period” and that the extended interaction between mammoths and humans means that “‘Blitzkrieg’-style explanations for end-Pleistocene extinction are increasingly hard to accept”. The idea that multiple factors caused the extinction is attractive, MacPhee says, but “how to bind them all together in a comprehensible narrative is no mean task”.

MacDonald agrees, saying that “the take-home message for mammoth extinction is 'it’s complicated'.” But the mammoths' slow decline could be a preview of what is to come for modern species. “The issues the mammoths faced of climate change, huge habitat change and human pressure,” MacDonald notes, “are exactly what species are facing in the twenty-first century.” The major difference, he says, “is that all these things are happening at a greatly accelerated rate compared to what the mammoths faced”.