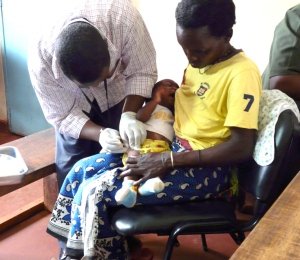 The low levels of protection seen in infants are a major setback for the RTS,S malaria vaccine.

A vast phase III clinical trial in Africa of the malaria vaccine candidate RTS,S/AS01 reported disappointing results this morning. The vaccine failed to show substantial protection in the key trial age group of infants who received their first shot between 6 and 12 weeks of age. The low protective effect of the vaccine was around half that reported last year in older children in the same study, and that of an earlier, smaller trial of babies of the same age group.

Work on the RTS,S vaccine began a quarter of a century ago within the US military, with development since 2001 being carried out by a public–private venture between the PATH Malaria Vaccine Initiative (MVI) – supported by US$200 million from the Bill & Melinda Gates Foundation in Seattle, Washington – and the London-based pharmaceutical company GlaxoSmithKline (GSK). Eleven research centres in seven African countries are involved in organizing the phase III trial, which involves vaccinating and monitoring thousands of children.

Researchers presented the latest set of results from the trial this morning at the International African Vaccinology Conference, being held in Cape Town, South Africa. The work was published simultaneously in the New England Journal of Medicine1 (NEJM), by a large international team – the paper's author list takes up more than half a page.

The study found that the number of episodes of clinical malaria compared to controls at 12 months was reduced by just under one-third in babies vaccinated at 6 to 12 weeks of age. This age group is the key stated target of the trial, because in poor countries any malaria vaccine would need to be given to children using the infrastructure for providing routine immunizations at this age. That reduction in clinical episodes is half the 62% reduction observed in smaller phase II trials in the same age group, and much less than the 55% reported last year within the current trial in a group of children who were vaccinated between 5 and 17 months old. Although no data for children aged 6 to 12 weeks was directly reported in the latter study, scientists at the time suspected from combined data that the vaccine performed worse in the younger age group (see 'Malaria vaccine results face scrutiny').

“The efficacy came back lower than we had hoped, but developing a vaccine against a parasite is a very hard thing to do,” said Bill Gates, co-founder of the Bill & Melinda Gates Foundation, in a statement today. “The trial is continuing and we look forward to getting more data to help determine whether and how to deploy this vaccine.”

“An efficacy of only one-third is probably too low to be useful clinically,” says Tim Peto, a researcher in tropical diseases and clinical medicine at the University of Oxford, UK. He adds that even this headline figure is an overestimate, because the vaccine's efficacy seems to wane over time.“A better way of summarizing the data is that the vaccine has 50% efficacy in the first 3–4 months but appears to stop working after about 6 months,“ he says.

David Kaslow, director of the MVI, defends the vaccine's showing in the latest results. “We always want to see high levels of protection, but I think we have shown again that RTS,S has an acceptable safety profile, and helps to provide protection against clinical malaria in the population,” he says. "We remain committed to developing this vaccine." Kaslow argues that even if the vaccine is only modestly protective, it could still have significant impact, given that there are an estimated 216 million cases of malaria, and some 655,000 deaths per year, mostly in children under five.

The trial results, while focused on clinical episodes of malaria, also seem likely to fall short of the expected criteria for a malaria vaccine set out by a WHO-led consortium, which stated that it should have a "protective efficacy of more than 50% against severe disease and death and last longer than one year”. Kaslow argues that these WHO criteria were only “benchmarks”, and that they do not exclude vaccines with lower efficacy, which might also be usefully deployed as part of a basket of malaria-control measures, such as insecticide-treated bednets. Kaslow says that until all the data is in from the entire phase III trial of RTS,SS at the end of 2014, it is too soon to say what that final outcomes will be. "To jump to conclusions is a disservice to the public," he says.

The results reported today might indeed become more nuanced once more data are included. Almost 60% of the cases of clinical malaria observed in the current study came from just 2 of the 11 trial sites, for example, says Kaslow. This suggests that vaccine efficacy might be even lower than the headline figure at these two sites, and higher at some other sites, he says. What might explain those differences won't be known until all the data are unblinded at the end of 2014, he says, but an obvious hypothesis is that the vaccine works least well in areas of intense malaria transmission. If that is the case, it could dent the vaccine's cost-effectiveness.

Blaise Genton, of the Swiss Tropical and Public Health Institute in Basel, Switzerland, agrees that the vaccine may prove to work better at some trial sites than the average reported today. But a reduction in clinical episodes of 50% would be the minimum efficacy desired, he says, although any effect on morbidity would benefit both individuals and health systems to some extent.

The children vaccinated between 6 and 12 weeks have been given a booster shot, and are now being monitored to see if they show reduced incidence of clinical malaria as they grow older, in particular in the period before 5 years old when children are most susceptible to the disease. Data collection over that period will also help answer whether RTS,S offers some protection against malaria, or just delays infection.

Whatever the final outcome for the RTS,S vaccine, many scientists, including its critics, salute the trial's contribution to the science of malaria vaccines, and the intensive cooperation with African research centres to create an unprecedented trial infrastructure on the continent. “Success in developing malaria vaccines depends on many factors: at the top of the list are partnerships and robust evidence, coupled with an understanding that different combinations of tools to fight malaria will be appropriate in different settings in malaria-endemic countries," says Kaslow. “My congratulations go out to the team at GSK and to the African research centres for their exemplary conduct of this trial.”