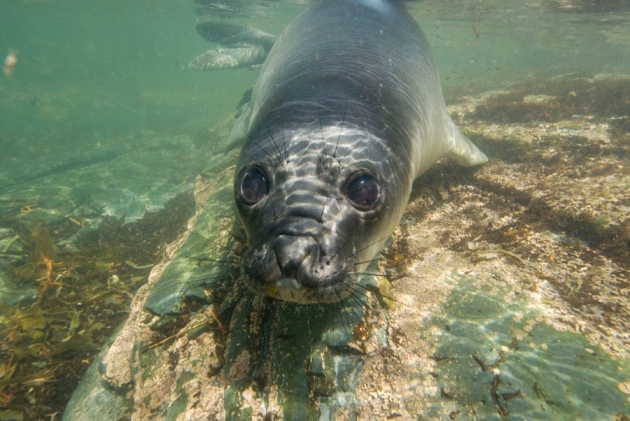 Endurance divers such as southern elephant seals (Mirounga leonina), which can stay underwater for up to two hours, have adapted by packing more oxygen in their muscle tissue.

Oxygen is vital for life, and animals have developed various ways to ensure they can access it under extreme conditions — deep under water, at high altitude or in times of stress. Three papers published today in Science1–3 examine the ways that different animals achieve this feat, and how their unique abilities evolved.

Enrico Rezende, an animal physiologist at the University of Roehampton in London, says that all three papers are looking for answers to the same question: “How do you make an efficient system to deliver oxygen to the muscles?”

In the first of the three studies1, a team led by zoologist Michael Berenbrink of the University of Liverpool, UK, studied a protein called myoglobin in deep-diving mammals. Myoglobin is the main oxygen-storing molecule in muscle and gives muscle tissue its red colour; diving animals such as whales have so much myoglobin that their muscles look black. This is odd, says Berenbrink, because at such high concentrations the myoglobin should clump together and become useless.

So his team looked closer at the amino-acid sequence of the protein, and found that myoglobin in aquatic and diving mammals has a far greater positive charge than that of their land-based relatives. Berenbrink thinks that this could permit the higher myoglobin concentrations seen in aquatic mammals, because the protein molecules electrostatically repel each other.

Diving into the past

Berenbrink and his colleagues also reconstructed the myoglobin sequences of the ancestors of today’s animals, which enabled the team to predict the maximum dive time of extinct aquatic mammals. “If you give me a myoglobin sequence, I can tell you if the animal is a good diver or not,” says Berenbrink.

Using the reconstructed sequences from different animals to infer the electric charge on their myoglobin, together with information about the animal’s body mass, the team was able to determine that an early whale ancestor — the terrestrial, wolf-sized animal Pakicetus — couldn’t stay under water for much more than 90 seconds. But the larger, six-tonne Basilosaurus, which appeared about 15 million years later than Pakicetus, could manage about 17 minutes. Many modern whales can remain submerged for more than an hour.

In a second paper, Jodie Rummer, a fish physiologist at James Cook University in Townsville, Australia, and her colleagues investigated the unique type of haemoglobin found only in ray-finned fish2. This version of the blood’s oxygen-transporting molecule is highly sensitive to acidity, and quickly dumps all of its oxygen if the surrounding pH drops — a process known as the Root effect.

This effect is well known in the fish buoyancy organ, or swimbladder, where it is used to pump oxygen into the swimbladder against a strong pressure gradient. But whether the effect could increase oxygen delivery to the muscles was unknown. Rummer first implanted oxygen sensors in the muscles of live fish and when she exposed them to mildly stressful situations, such as elevated carbon dioxide in the water, she saw oxygen levels in the muscles rise by 65%. This was made possible by an enzyme that increases the acidity inside red blood cells by shuttling CO2 into them, making haemoglobin dump its oxygen.

Rummer and her colleagues think that Root haemoglobins may be what allowed fish such as salmon to become such endurance athletes, giving them an edge over the competition. “Fish make up 50% of vertebrates; this could be the key to their evolutionary success,” she says.

Finally, a team led by Jay Storz, a molecular biologist at the University of Nebraska in Lincoln, studied the haemoglobin of deer mice (Peromyscus maniculatus)3. Deer mice that live at different altitudes have different versions of haemoglobin, and the high-altitude version has a higher affinity for oxygen than the haemoglobin of deer mice that live at low altitudes. Storz found that 12 mutations, grouped in three clusters, were responsible for the two variations.

Rezende, who wrote a commentary in Science giving an overview of all three papers4, says that whereas the studies show that animals have found several ways to increase the amount of oxygen delivered to their muscles, all follow one unifying theme: all the adaptations help the animals to perform better under difficult conditions. And this is so useful that it has evolved multiple times through different pathways. “Increased oxygen delivery is almost always associated with high performance,” he says.