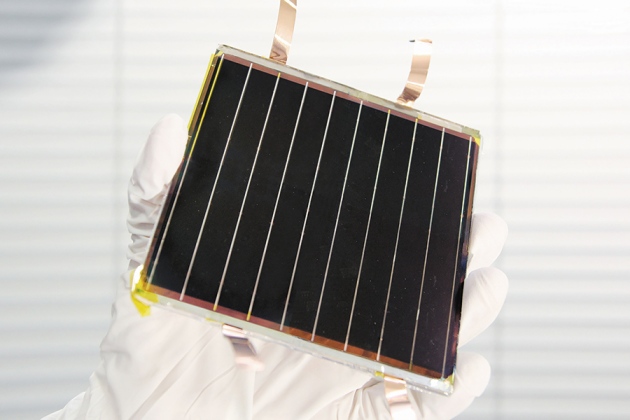 Perovskite solar cells are becoming larger and much more efficient.

The hunt is on to find a cheap and safe solar-cell technology. Crystalline silicon is the basis for 90% of commercial photovoltaic devices, which use semiconductors to convert light into electricity. But silicon photovoltaics are still expensive to process, their manufacture produces toxic by-products and they are cumbersome to install.

Perovskites could be a game-changer. These materials have crystal structures that are based on pyramid-like tetrahedral arrangements of atoms or molecules. Long explored as potential semiconductors, superconductors and for their optical and magnetic properties, perovskites are also efficient at absorbing light and transporting charges — ideal properties for capturing solar power.

Perovskite photovoltaic cells are cheap and easy to assemble. Typically they combine common inorganic and organic components, often methylammonium or formamidinium, both compounds of carbon, hydrogen and nitrogen. In solution, they can be printed on glass or film over several square centimetres. They are also less sensitive to impurities than are expensive crystalline semiconductors such as gallium arsenide.

In the past decade, research into perovskite solar cells has boomed. At least in the lab, the efficiency of perovskite devices is now more than a match for those based on silicon (see 'Rising performance'). In 2006, the first perovskite photovoltaic converted 2.2% of photons into electrons1; by 2016, that figure was 22.1%. Silicon rooftop panels have an efficiency of 16–20%; perovskite cells could in theory could reach 31%. And even higher efficiencies might be achieved by combining silicon and perovskite devices.

But there are major challenges to using perovskites on a commercial scale. The main one is stability: the cells currently only last for months outdoors, whereas silicon solar panels are usually guaranteed to work for at least 25 years. Weather changes and extreme light levels, temperature and humidity all cause perovskite cells to decompose. Moisture is the worst problem. Reactions with water form hydrates that alter the structures of the crystals so that they cannot absorb visible light. In the past decade, cell lifetimes have extended from a few minutes to 6 months. But much more work is needed.

Here we highlight five ways to improve the stability of perovskite solar cells. We believe that within two years, they could exceed efficiencies of 25%, while remaining stable for more than a year.

Crystal structure. Even small differences in the arrangement of atoms affect stability2, 3. Perovskites have the formula ABX3, in which A is an organic or inorganic component, B is a metal atom and X is a halide. Researchers have tried modifying site A to form a more stable phase, and these changes seem to have less effect on the optoelectronic properties than do changes to B or X. This has resulted, for example, in a form of perovskite that remains stable up to 170 °C. 'Doping' the crystal — or introducing small imperfections — with caesium ions or organic groups has also increased stability, from less than 100 hours to beyond 1,000 hours2, 3. Weak interactions of the A cation with B and X also limit the structural stability of perovskite.

Varying the X site, one group has found that using small bromide ions rather than large iodides improves stability4. Fewer studies have looked at altering the B site, but tests that replaced lead with elements such as tin and germanium impaired efficiency and stability.

Altering crystal structure is not a silver bullet. Fixing one problem affects everything else. Adding large molecules breaks the crystal apart and disrupts the flow of charge. Efficiency can fall by more than half5. But it can be advantageous: splitting perovskite into 'quasi-2D' sheets reduces water absorption, for instance5.

On balance, we believe that introducing a small number of large groups into the A site is the best way to improve the stability without sacrificing too much efficiency.

Film quality. Moisture and ionic defects travel through gaps between perovskite crystal grains to erode stability6. So making perovskite films with larger crystals and fewer grain boundaries is a priority. And researchers need to investigate whether porous structures could be more stable than planar ones.

Alternative designs. Some exotic forms of perovskites have appealing electronic and optical properties in theory. And examples are those with a 'unit cell' — the molecular arrangement which repeats throughout a crystal lattice — that is twice as large (such as Cs2BiAgCl6 and Cs2BiAgBr6)7. But such double forms have not yet been incorporated into solar cells. Experiments are needed that focus on enhancing the lifetime of charge carriers, reducing defects and solving processing issues.

“Only through strict and systematic measurements can we observe how modifications make these solar cells more stable.”

Conducting layers and interfaces. In a solar cell, perovskite is sandwiched between two layers that conduct charges (electrons and holes). These are connected by electrodes, at least one of which is transparent so that light can shine through. The properties of all these materials can influence the stability of the cell. For example, a layer of the small molecule Spiro-OMeTAD is often used to transport holes. Lithium salt is usually added to enhance its conductivity. But the salt absorbs water, which degrades the perovskite. Titanium dioxide (TiO2), which is used widely as an electron transport material, is broken down by ultraviolet light. Alternative charge-carriers include fullerenes and the polymer PEDOT:PSS, but these also absorb water or react with oxygen.

Other charge-transport materials are needed8. They should be able to form high-quality films, repel water and be chemically and thermally stable. Candidates include carbon, carbon nanotubes and inorganic metal oxides such as NiOx, SnO2, ZnSnO4 and BaSnO3. Stable insulating materials such as poly(methyl methacrylate) (PMMA) and Al2O3 could be combined with a conducting layer to enhance the longevity.

Stopping the movement of crystal defects through the conducting layer or across the interface with the perovskite film can also improve stability9. Imperfections trap charges and enable ions to migrate.

Encapsulation. The effects of humidity and oxygen can be cut by encasing devices in an inert environment. Industrial encapsulation techniques for organic electronics should be applicable to perovskite, with some modifications. The processing may need tweaking to minimize the cells' exposure to extremes of temperature, atmosphere and UV light.

One option involves coatings that incorporate luminescent photopolymers, which convert UV light into visible light. These protect a cell from water, oxygen and UV light, and improve cell performance10. Stable inorganic materials, such as SiO2, Si3N4 or Al2O3 could also be combined with the organic epoxy matrix.

And standards for testing stability are needed — all involved should report stability data exhaustively. Only through strict and systematic measurements can we observe how modifications make these solar cells more stable. Publications should include details of the testing environment (humidity, temperature and gas flow, for instance), as well as information about encapsulation and light exposure, among other measures.