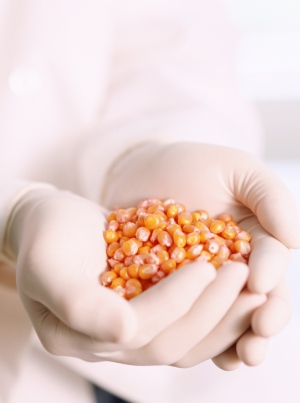 Engineered corn kernels could be a useful way to produce drugs.

For example, the rare lysosomal storage disease mucopolysaccharidosis I is treated using enzyme-replacement therapy. The enzymes must be made in cells, and the high production costs mean that the drugs can cost hundreds of thousands of dollars a year. So Allison Kermode, a plant biologist at Simon Fraser University in Burnaby, Canada, whose husband works with people who have lysosomal storage disorders, decided to develop a way to manufacture the necessary enzymes in maize (corn).

When human proteins such as enzymes are expressed in plant cells, they are usually decorated with plant-specific sugar molecules, which could prompt a dangerous immune reaction if injected into patients. But today in Nature Communications1, Kermode and her colleagues describe how they avoided these modifications.

The team tweaked the protein-producing genes, not to alter the sequence of the human protein, but to ensure that, once made, the proteins would not be moved through the cell's Golgi complex, a structure where the problematic sugars are added. The engineered maize seeds produced proteins decorated with sugars that could be converted to human forms.

Richard Pattison, a cell biologist at the Boyce Thompson Institute for Plant Science in Ithaca, New York, calls the approach “very elegant”. Most attempts to solve the sugar problem require mutating the protein, which could disrupt its function, or engineering plants to modify proteins differently — a time-consuming approach that often does not work.

Other plant systems have been used to make therapeutic proteins. In May, the US Food and Drug Administration approved Elelyso (taliglucerase alfa) — a drug for the lysosomal storage disorder Gaucher disease — which is produced in cultured carrot cells. And drugs made in duckweed, safflower and tobacco have progressed as far as clinical trials. However, making proteins with certain sugar patterns using these systems is still difficult or impossible.

In terms of controlling protein modifications, Kermode’s localization technique is “a significant improvement for the production of biopharmaceuticals”, says Herta Steinkellner, a molecular biologist at the University of Natural Resources and Life Sciences in Vienna.

And there particular advantages of packing transgenic proteins into corn kernels. Cereal crops can be grown using established methods, and seeds are ideal for long-term protein storage. However, Kermode says, the transgenic crops should be grown in contained greenhouses to prevent them from escaping into the environment.

But there is a long way to go before maize-made drugs reach the market, says Kermode. Enzymes purified from the engineered seeds are functional, but they have not yet been tested in cells, let alone humans. The team also needs to ensure that the seeds produce the protein in higher quantities. If all goes well, however, maize may one day become the go-to way to make complex protein drugs.