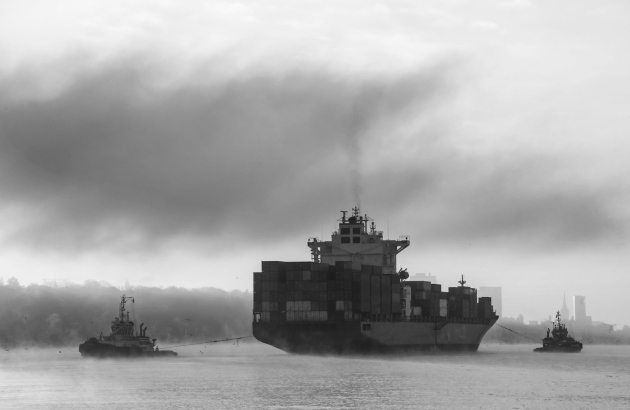 Voluntary efforts to tackle carbon pollution from the shipping industry have failed.

In Herman Melville’s novel Moby-Dick, seafaring is the occupation of adventure-lovers. But since the maritime classic was published in 1851, the act of ‘sailing about a little’ has become a huge commercial undertaking. Today, a massive fleet of cargo ships transports 90% of global consumer goods. Shipping is efficient — but comes with an environmental cost that has not been adequately accounted for.

Worldwide, there are about half a million ships in operation, together producing almost one billion tonnes of carbon dioxide each year. That’s between 2% and 3% of the global total, and more CO2 than Germany emits annually. But unlike greenhouse-gas emissions from Germany and other nations, shipping emissions are not subject to the reduction pledges made by individual nations under the Paris climate agreement. (The Paris deal does, however, include shipping emissions in its global carbon-budget calculations.)

“As a global business, shipping must be tackled by global regulations.”

After years of inaction, the great white whale of greenhouse-gas pollution is now in the cross hairs of the International Maritime Organization (IMO), the specialized United Nations agency that sets safety and environmental standards for the global shipping industry. The IMO is under pressure from campaigners and representatives of other, regulated sectors to agree a global cap on shipping emissions.

Following sharp increases in the early 2000s, the sector’s emissions have remained more or less stable since the global financial crisis of 2008. But that is unlikely to continue. The current overcapacity in the maritime cargo market means that ship traffic (and emissions) can increase quickly to meet demand. Moreover, the shipping industry at large — including the cruise sector — has potential to grow, and rapidly.

The IMO has a specialist greenhouse-gas working group that is grappling with the idea of a cap. But its latest meeting, held last week in London, closed without declaring much progress. Overall, the IMO is committed to tightening environmental standards for new ships. Yet its technology-oriented strategy — including an Energy Efficiency Design Index that requires the engines of vessels to burn less fuel — is unlikely to be enough. Cleaning up the industry will require adequate market instruments and economic incentives to encourage owners and operators of both ships and ports to adopt climate-friendly practices, such as enforcing lower speeds.

Owing to the peculiarities of this volatile business, the routes, speed and fuel consumption of tens of thousands of container ships are hard to monitor and verify. An emissions-trading system, for example, would be difficult to implement and even harder to manage. The IMO agreed last year to set up a global CO2 data-collection system that will yield welcome knowledge, as will improvements in tracking the positions and movements of ships from space. But a tax by national governments on fossil fuels used by ships — incurred at refinery level — might be a more effective economic mechanism.

Voluntary efforts alone will not do. The industry has set up a series of half-hearted and overlapping eco-ratings schemes since the 2000s. But an analysis published online on 16 October shows that these have had no notable effect on the environmental performance of ships (R. T. Poulsen et al. Mar. Policy 87, 94–103; 2018). Whereas eco-ratings can steer companies to make more-efficient refrigerators and washing machines in line with the preferences of consumers and regulators, maritime transport is different. The pressure of end-users is too distant to influence ship owners and operators. And price remains the dominant factor for builders and buyers of cargo ships.

As a global business, shipping must be tackled by global regulations, and not through a patchwork of voluntary efforts and regional laws. It is true that some regional efforts, such as the European Union’s scheme to monitor, report and verify CO2 emissions from large ships using its ports, might be a step towards global regulations.

The IMO has already shown that it can tackle other environmental issues. Measures it introduced in the wake of the Exxon Valdez oil spill in 1989 ensure that oil tankers are now much safer. An inter­national convention for ballast-water management, which aims to control the spread of harmful invasive species, came into force in September after years of preparation (although it does not address biofouling on ships’ hulls, which is potentially more harmful to local ecology). The IMO has also agreed measures to encourage environmentally responsible ship recycling and minimize uncontrolled shipbreaking, much of which occurs on South Asian beaches. However, this 2009 Hong Kong convention is still not implemented and is awaiting ratification by most member parties.

When it comes to the impact on climate, there is no excuse for delay. Emissions from shipping largely escape the public scrutiny and criticism attracted by those from aviation. Parties to the IMO should step up and hasten the implementation of the necessary standards.