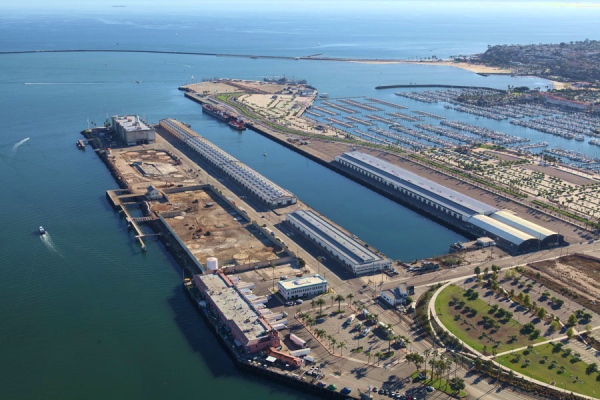 A 100-year-old dock on the San Pedro waterfront in Los Angeles will be developed into an urban marine research and business park, with the first phase slated for completion in 2018.

California has no shortage of high-profile marine research institutes — from the Scripps Institution of Oceanography in La Jolla in the south, to the Monterey Bay Aquarium Research Institute farther north, in Moss Landing.

But backers of a plan to convert a 100-year-old dock in the Port of Los Angeles into a US$500-million research centre and business park called AltaSea say that there is still an untapped niche in ocean science — a facility focused on making Los Angeles and other coastal cities sustainable by helping them to adapt to climate change, to become more energy efficient and to reduce marine pollution.

The 11-hectare facility will be developed by a public–private collaboration of the Port of Los Angeles, a family foundation and several California universities. The centre will house labs with circulating seawater, offices, lecture halls, classrooms and a visitor centre, according to construction plans unveiled on 17 June by port officials. The collaboration also hopes to build the world's largest seawater wave tank to study wave damage to coastal infrastructure.

"The idea is to create a hybrid institute around the fundamental challenges inherent to coastal cities," says Anthony Michaels, chief scientist at Pegasus Capital Advisors, an investment firm in El Segundo, California, who championed the AltaSea proposal during his tenure as director of the Wrigley Institute for Environmental Studies at the University of Southern California in Los Angeles.

AltaSea's first tenant will be the Southern California Marine Institute (SCMI), a research alliance of 11 major universities in the region — including eight California State University campuses, the University of Southern California and Occidental College, both in Los Angeles, and the University of California, Los Angeles. "This will be a green, world-class research centre in an area where we are seeing the greatest urban-ocean problems, from runoff to climate change," says biologist Daniel Pondella, the SCMI's director and a professor at Occidental College. AltaSea's location on an industrial urban waterfront will help the 19-year-old alliance to continue its work on harmful algal blooms, the restoration of near-shore reefs damaged by nutrient runoff, and other signs of human impact on the world's oceans.

Geraldine Knatz, the Port of Los Angeles's executive director — and a former marine scientist — calls the project “a game changer” that could help revitalize the San Pedro neighborhood that AltaSea will call home. Fifty years ago, more than 100,000 people streamed to the port each day; today, that figure has shrunk to just 16,000.

But first, AltaSea's backers will have to continue trawling for cash. They have raised just $57 million of the estimated $155 million that they will need to pay for the project's first phase, which they hope to complete in 2018. The Port of Los Angeles is contributing $32 million to upgrade the dock and the Annenberg Foundation in Los Angeles has donated $25 million to kick-start construction. A second phase of development, including construction of the wave tank, would bring the project's total cost to an estimated $500 million over 20 years.

Michaels says that he isn't worried about raising the extra money. He envisions AltaSea as a hotbed of research for companies working on aquaculture, algal biofuels, marine sensors and urban agriculture, and not just as a home for academic scientists. "We're taking a gamble on the real faith that a facility this unique will create genuine value by bringing everyone together," he says.

Despite tight federal and state research funding, even would-be competitors — such as the Center for Oceans and Human Health at the Scripps Institution of Oceanography — view AltaSea as a welcome addition. "Studying the interactions between the ocean and human health is an emerging area of science," says Bradley Moore, director of the Scripps centre, which was established last year with a $6-million joint grant from the US National Science Foundation in Arlington, Virginia, and the National Institutes of Health in Bethesda, Maryland. "If AltaSea can put more resources towards helping find solutions, that's great."