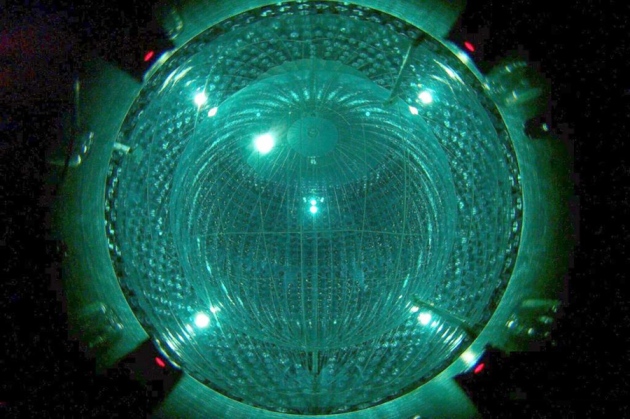 Neutrinos from the Sun were detected in when they crossed the Borexino detector's 'inner vessel', a nylon sphere 8.5 metres across filled with purified benzene.

After decades of searching, physicists have finally confirmed the existence of low-energy neutrinos that are direct evidence for the first crucial step in the nuclear reaction that makes the Sun shine. While the detection validates well-established stellar fusion theory, future, more sensitive versions of the experiment could look for deviations from the theory that would reveal new physics.

The conversion of hydrogen into helium is the source of 99% of the Sun’s energy. The multistep process begins when the star’s hot, dense core squeezes two protons together to form deuterium, a heavy isotope of hydrogen with a nucleus made of one proton and one neutron. One of the fused protons then transforms into a neutron, a process that releases a neutrino and a positron (the antimatter counterpart of the electron).

While the positrons are almost instantly annihilated in collisions with electrons, the neutrinos zip through matter unscathed, so they escape straight into outer space, radiating in all directions at nearly the speed of light. Other nuclear reactions in the Sun also produce neutrinos, and 100 billion of the particles bombard each square centimetre of Earth every second. The proton–proton reaction accounts for 90% of all solar neutrinos, but the neutrinos it emits have relatively low energy, and their signal can be swamped by the radioactive decay of ordinary terrestrial materials. Thus, although more-energetic solar neutrinos have been detected since the 1960s, those from the proton–proton reaction had eluded detection so far.

Now, the Borexino detector, housed beneath more than a kilometre of rock at the Gran Sasso National Laboratory near L'Aquila, Italy, has succeeded in detecting the neutrinos that accompany the proton-proton reaction at the solar core. Physicist Andrea Pocar of the University of Massachusetts Amherst and his collaborators report the findings in Nature1.

Although solar physicists had a general understanding of the Sun's nuclear reactions, they could have been mistaken about exactly which reactions take place and their relative importance. That would have left the question of how the Sun shines incompletely answered, says Michael Smy, a neutrino physicist at the University of California, Irvine. For this reason, the Borexino collaboration's direct detection of the neutrinos “is a landmark achievement”, he says.

The finding not only confirms how some 90% of the stars in the Milky Way — including those similar to the Sun but also many that are less massive — generate most of their energy, but provides a near-instantaneous snapshot of the solar core, since the neutrinos arrive at Earth just 8 minutes after they are created.

The core of the Borexino experiment features a nylon vessel containing 278 tonnes of an ultrapure benzene-like liquid that emits flashes of light when electrons are scattered by neutrinos. The liquid was derived from a crude-oil source nearly devoid of radioactive carbon-14, which can hide the neutrino signal. The detector fluid is surrounded by 889 tonnes of non-scintillating liquid that shields the vessel from spurious radiation emitted by the experiment's 2,212 light detectors.

Borexino can measure the flux of low-energy neutrinos with a precision of 10%. Future experiments could bring that down to 1%, providing a demanding test of theoretical predictions and thus potentially uncovering new physics.

For example, tiny mismatches between the rate of energy production indicated by neutrino detection and the energy from photons in the sunlight that reaches Earth could signify the presence of dark matter, the hypothetical invisible material believed to account for most of the mass in the Universe, says astrophysicist Aldo Serenelli of the Institute of Space Sciences in Bellaterra, Spain. Experiments may also be able to test how well models describe the transformation of electron neutrinos into two other types — tau neutrinos and muon neutrinos — as they travel from the solar core.