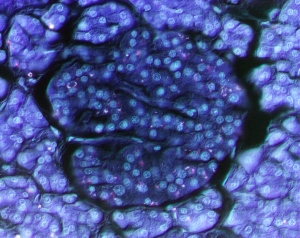 Betatrophin sparks the proliferation of pancreatic β cells in mice, which are found in the islet of Langerhans (shown here).

Biologists have found a hormone in the liver that spurs the growth of insulin-secreting cells in the pancreas, a discovery they hope will lead to new treatments for diabetes.

A team led by Douglas Melton, co-director of the Harvard Stem Cell Institute in Cambridge, Massachusetts, identified the hormone, betatrophin, by inducing insulin resistance in mice using a peptide that binds to insulin receptors. That caused the animals' insulin-secreting pancreatic β cells to proliferate. The researchers then searched for genes that showed increased activity, zeroing in on one that they were able to link to betatrophin production.

Further experiments showed that 8-week-old mice injected with betatrophin showed showed an average 17-fold rise in the replication of their insulin-secreting pancreatic β cells, the researchers report in Cell1. Betatrophin is also found in the human liver, the team says.

“It’s rare that one discovers a new hormone, and this one is interesting because it’s so specific,” says Melton. “It works only on β cells and it’s so robust and so potent.”

Pancreatic β cells replicate rapidly during embryonic and neonatal stages in both mice and humans, but their growth falls off dramatically in adults. A decrease in the function of the cells late in life is the main cause of type 2 diabetes, a metabolic disorder that affects more than 300 million people worldwide. In the United States alone, the two forms of diabetes — type 2 and and type 1, which is caused by an autoimmune attack on pancreatic β cells — account for US$176 billion in direct medical costs each year.

Melton thinks that injections of betatrophin once a month, or perhaps even once a year, could induce enough activity in pancreatic β cells to provide the same level of blood-sugar regulation for people with type 2 diabetes as daily insulin injections do. But more importantly, he adds, they would cause fewer complications because the body would be making its own insulin. He also hopes that betatrophin will be able to help people with type 1 diabetes.

Matthias Hebrok, director of the University of California, San Francisco, Diabetes Center, says that the work “is a great advance”. “The findings are very interesting,” he says, although he would like to see the experiments repeated in older mice. “Do mice that are on their way to becoming diabetic at an advanced age truly have an increase in proliferative capacity upon treatment with betatrophin?” he asks.

Henrik Semb, managing director of the Danish Stem Cell Center in Copenhagen, says that "the identification of a factor, betatrophin, that stimulates mouse β-cell replication with remarkable efficiency is a very important discovery, because it provides the starting point for further studies to elucidate the underlying mechanism of β-cell replication."

β-cell replication has proved difficult to control in humans.

Producing enough betatrophin for testing in human clinical trials will take about two years, according to Melton, who is also working to identify the hormone’s receptor and its mechanism of action.