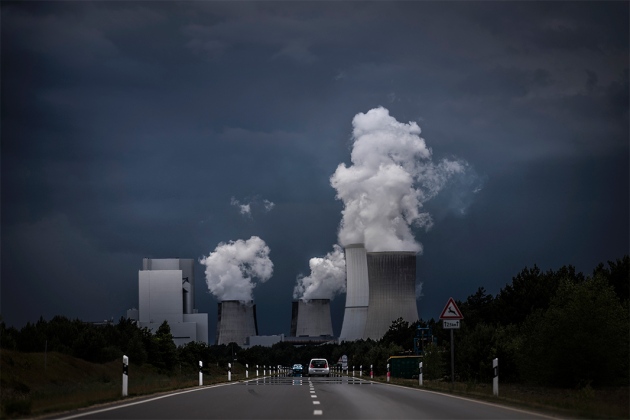 Coal-fired power plants, such as this one in Germany, are a source of greenhouse-gas emissions.

A team of climate scientists has delivered a rare bit of good news: it could be easier than previously thought to limit global warming to 1.5 °C above pre-industrial levels, as called for in the 2015 Paris climate agreement. But even if the team is right — and some researchers are already questioning the conclusions — heroic efforts to curb greenhouse-gas emissions will still be necessary to limit warming.

Published on 18 September in Nature Geoscience1, the analysis focuses in part on the fact that global climate models used in the 2013 report from the Intergovernmental Panel on Climate Change (IPCC) tend to overestimate the extent of warming that has already occurred. After adjusting for that discrepancy and running further models, the authors of the latest study found that the amount of carbon that humanity can emit from 2015 onward while holding temperatures below 1.5 °C is nearly three times greater than estimated by the IPCC — or even larger if there is aggressive action on greenhouse gases beyond carbon dioxide.

The implications for global policymakers are significant. Humanity is poised to blow through the IPCC’s carbon budget for a 1.5 °C rise within a few years, leading many scientists to declare the goal impossible. But the new analysis suggests that it could be met with a modest strengthening of the current Paris pledges up to 2030, followed by sharp cuts in carbon emissions thereafter.

The work is receiving mixed reviews. Some argue that the analysis is fundamentally flawed, because it centres on a period of slower warming that began around the turn of the millennium. This period, often referred to as the climate hiatus, continued until 2014. Scientists think that natural variability in the climate system temporarily suppressed temperatures during this period.

The team’s estimate for the amount of warming that humans have caused so far — 0.93 °C — could thus be artificially low, because it calculates the human contribution to warming during this cooler time, says Ben Sanderson, a climate modeller at the National Center for Atmospheric Research in Boulder, Colorado.

At the same time, he says, the oceans and the land were probably absorbing more carbon than normal during this period. Natural processes will eventually dump some of that back into the atmosphere, thus reducing the amount of carbon that humanity can emit before reaching 1.5°C.

“These two effects, to my mind, explain away their result and reinforce the original IPCC conclusion,” Sanderson says.

But Millar and his colleagues argue that the effects of the hiatus would be minimal. The team used multiple methodologies to estimate the actual warming due to greenhouse gases, independent of short-term climate variability. The scientists calculated how much carbon would be needed to push the temperature up by another 0.6 °C, to 1.5 °C. But they also calculated how much carbon it would take to reach that threshold if the amount of human-caused warming so far was lower or higher than their estimate of 0.93 °C.

In all cases, Millar says, the amount of carbon that humans could emit before Earth warms to that 1.5 °C threshold is larger than previously estimated.

Nathan Gillett, a climatologist at the Canadian Centre for Climate Modelling and Analysis in Victoria, says that other teams have previously documented the slight discrepancy between the warming projected by climate models and that shown by actual observations. But Gillett credits Millar’s team with teasing out the implications of this gap, and of reducing the uncertainty surrounding the amount of emissions that would produce warming of 1.5 °C. “I think their central conclusion is robust,” Gillett says.

The debate over how close the world is to the 1.5 °C warming threshold is unlikely to be resolved any time soon, but one thing is clear: modelling scenarios that enable Earth to remain below that target poses a new kind of challenge. Uncertainty about the details of humanity’s carbon budget don’t matter so much when scientists are modelling the cumulative effect of greenhouse gases over the course of centuries. But fine details matter a great deal when researchers are looking at what level of greenhouse-gas emissions would bump warming to 1.5 °C, because, in that case, scientists’ goal is to tease out the precise effects of heat-trapping gases over a few decades.

“When we start thinking about really ambitious mitigation goals in the really near term, everything starts to matter,” Millar says.

That is true for science as well as for climate policy. “For a lot of people, it would probably be easier if the Paris goal was actually impossible,” Millar says. “We’re showing that it’s still possible. But the real question is whether we can create the policy action that would actually be required to realize these scenarios.”