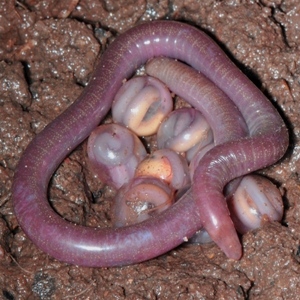 Proceedings of the Royal Society B

Chikila fulleri broods its young underground, like other members of the newly discovered amphibian family.

An entirely new family of amphibians has been discovered hiding in the soils of northeastern India.

In total, seven new species of these limbless, soil-dwelling and rather ugly creatures were unearthed by a team of researchers digging for over 1,000 man-hours.

“The discovery adds a major branch to the amphibian tree of life,” note Sathyabhama Das Biju of the University of Delhi, and his colleagues in their paper, published in Proceedings of the Royal Society B.

These creatures are members of the caecilian order of amphibians, which look more like earthworms than their better-known classmates the frogs and toads, and can grow to be more than a metre long. They build nests underground and brood their young there, as shown above with Chikila fulleri. More than 500 examples of the new family of caecilians were found in 58 locations in northeastern India.

The new species are just the latest triumph for Biju, whose website details some of the 100-plus new species his team has described.

Sadly, as nearly always seems to be the case, the paper describing these new creatures comes with this caveat:

“Further explorations and conservation actions are urgent because the region’s biodiversity is generally under high threat from the growing resident human population and rapid deforestation.”