Original images of the galloping mare Annie G. (left) are shown next to images encoded into bacterial DNA and recovered (right) using the gene-editing tool CRISPR.

Internet users have a variety of format options in which to store their movies, and biologists have now joined the party. Researchers have used the microbial immune system CRISPR–Cas to encode a movie into the genome of the bacterium Escherichia coli.

The technical achievement, reported on 12 July in Nature1, is a step towards creating cellular recording systems that are capable of encoding a series of events, says Seth Shipman, a synthetic biologist at Harvard Medical School in Boston, Massachusetts. While studying brain development, Shipman became frustrated by the lack of a technique to capture how cells in the brain take on distinct identities. This inspired him to explore the possibility of making cellular recorders.

“Cells have this privileged access to all sorts of information,” he says. “I would like to have these molecular recordings functioning in the developing nervous system and recording information.”

To develop such a system, however, his team would need to establish a method for recording hundreds of events in a cell. Shipman and his colleagues, including Harvard geneticist George Church, harnessed the CRISPR–Cas immune system best known for enabling researchers to alter genomes with relative ease and accuracy.

Shipman’s team exploited the ability to capture snippets of DNA from invading viruses and store them in an organized array in the host genome. In nature, those snippets then target an enzyme to slice up the invader’s DNA. (It is typically this targeted DNA cutting that geneticists harness for gene editing.)

The team designed its system so that these snippets corresponded to pixels in an image. The researchers encoded the shading of each pixel — along with a barcode that indicated its position in the image — into 33 DNA letters. Each frame of the movie consisted of 104 of these DNA fragments. 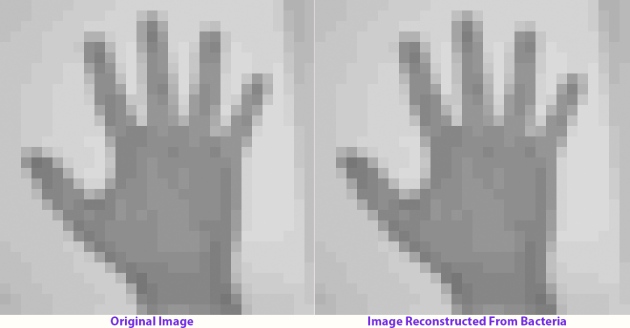 An image of a hand (left) was encoded into bacterial DNA and then extracted (right) after many generations of bacterial growth.

The team introduced the DNA into E. coli at a rate of one frame per day for five days. The researchers then sequenced the CRISPR regions in a population of bacteria to recover the image. Because the CRISPR system adds DNA snippets sequentially, the position of each snippet in the array could be used to determine the original frame to which the snippet belonged.

The system is a long way from becoming the recorder of which Shipman dreamt while studying the brain. Substantial technological advances are needed to reach that point, notes bioengineer Randall Platt at the Swiss Federal Institute of Technology (ETH) Zurich in Basel. Because no single cell takes up more than one DNA snippet from each frame, the information for the movie is stored across populations of cells. And no one has yet transferred the CRISPR arrays into mammalian cells. “It’s full of limitations, but this is pioneering work that they’re doing,” he says. “It’s elegant.”

Other CRISPR–Cas systems can convert RNA into DNA that is then inserted into the CRISPR array[2]. This could open up the door to using the arrays to track gene expression without cracking cells open to remove their RNA, Platt notes.

Victor Zhirnov, chief scientist at the Semiconductor Research Corporation in Durham, North Carolina, calls the work “revolutionary”, and hopes to start tinkering with the technique at his research foundation. “It’s like this is the first aeroplane flown in 1903: it was just a curiosity,” says Zhirnov. “But ten years from that, we had aeroplanes almost like what we have today.”