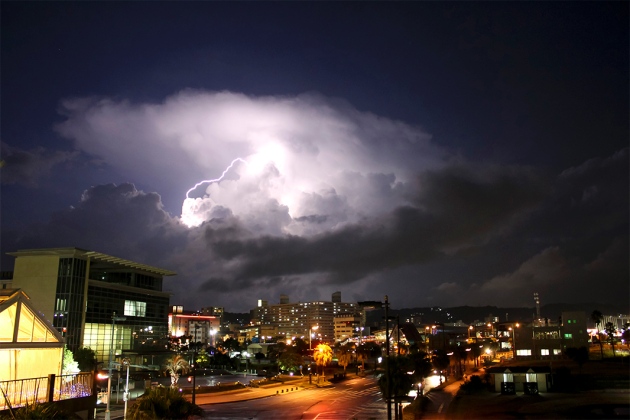 A streak of lightning in the skies over Japan has generated positrons — the antimatter equivalents of electrons — and radioactive carbon-14, confirming a theoretical prediction, according to a paper published in Nature on 22 November1.

Since the 1990s, orbiting observatories designed to observe the heavens have also detected flashes of γ-rays coming from Earth, which were thought to have their origins in atmospheric phenomena. To investigate this theory, Teruaki Enoto, an astrophysicist at Kyoto University in Japan, and his collaborators set up an array of γ-ray detectors close to the Kashiwazaki-Kariwa nuclear power plant. Winter thunderstorms in Japan are famous for their spectacular lightning, he says, and the low clouds make these relatively easy to observe.

On 6 February, the detectors sensed an unusual event. A double lightning bolt just off the coast shot out an initial, one-millisecond spike of γ-rays, with relatively high energies of up to 10 megaelectronvolts. This was followed by a γ-ray afterglow of less than half a second. Then there was a telltale signal — γ-rays concentrated at 511 kiloelectronvolts of energy, which lasted for about a minute. Physicists say this is the unmistakable signature of positrons annihilating in a puff of energy as they hit electrons in the surrounding matter.

Together, the three waves of γ-rays point to a photonuclear reaction first proposed2 a decade ago by Leonid Babich, a physicist at the Russian Federal Nuclear Center in Sarov. Lightning can accelerate some electrons to almost the speed of light, and the electrons can then produce γ-rays. Babich proposed that when one of these γ-rays hits the nucleus of a nitrogen atom in the atmosphere, the collision can dislodge a neutron. After briefly bouncing around, most of the neutrons get absorbed by another nitrogen nucleus. This adds energy to the receiving nucleus and puts it in an excited state. As the receiving nucleus relaxes to its original state, it emits another γ-ray — contributing to the giveaway γ-ray glow.

Meanwhile, the nitrogen nucleus that has lost one neutron is extremely unstable. It decays radioactively over the next minute or so; in so doing, it emits a positron, which almost immediately annihilates with an electron, producing two 511-keV photons. This was the third signal, Enoto says. He suspects that his detectors were able to see it only because the briefly radioactive cloud was low, and moving towards the detectors. This combination of circumstances might help to explain why the photonuclear signature has been seen so rarely. Enoto says that his team has observed a few similar events, but that the one described in the paper is the only clear-cut event so far.

Babich also predicted that not all of the neutrons dislodged from nitrogen by a γ-ray are absorbed. Some of them instead will trigger the transmutation of another nitrogen nucleus into carbon-14, a radioactive isotope that has two more neutrons than ordinary carbon. This isotope can be absorbed by organisms; it then decays at a predictable rate long after the organism’s death, which makes it a useful clock for archaeologists.

The main source of the carbon-14 in the atmosphere has generally been considered to be cosmic rays. In principle, lightning could also contribute to the supply. But it is not clear yet how much of the isotope is produced in this way, says Enoto, in part because it’s possible that not all bolts initiate photonuclear reactions.

"I agree with their interpretation of their data,” says physicist Joseph Dwyer of the University of New Hampshire in Durham. But, he adds, Enoto's team's explanation does not solve all puzzles related to positrons in the atmosphere. In particular, the photonuclear reaction does not seem to match an event Dwyer observed in 2009 from a research aeroplane. His detector spotted a signature of positrons only for a fraction of a second — too short to originate from nuclear decay, he says. Also, his detector saw no initial flash in that case. "If it was there, it should have been very obvious."