If ever a star was misunderstood, it is η Carinae. One hundred and seventy years ago, astronomers mistook a series of eruptions on its surface for a supernova. Such an explosion would usually mark the star’s death — yet η Carinae survived. Since then, researchers had thought that they had got to grips with the star's volatile behaviour, but observations of 'light echoes' from the ancient explosion have now left them even more perplexed. 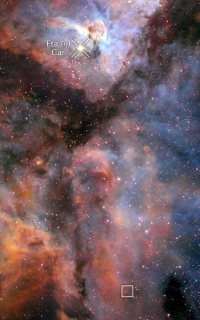 Light echoes from an explosion in the η Carinae star system bounced off dust clouds in the area of the box, reaching Earth almost 200 years later than the rest of the light.

Light echoes, first noticed about a century ago, are created when some of the light from distant bright events — such as supernovae — is reflected off surrounding dust, so that it reaches Earth sometimes hundreds of years after the light that took a more direct route. Over the past decade or so, astronomers have realized that echoes let them train modern telescopes on explosions that faded centuries ago, says Armin Rest, an astronomer at the Space Telescope Science Institute in Baltimore, Maryland. It is now possible to analyse the wavelengths of light still arriving from these events, and to infer the temperature of the exploding material, its composition and the speed at which it was ejected.

One such event is the 'Great Eruption' of η Carinae, which at around 100 times the mass of the Sun is one of the most massive binary star systems in the Milky Way. Between 1838 and 1858, the system shed about one-tenth of its mass, with some material ejected at around 1,000 kilometres per second.

η Carinae became the archetype of a class of stars that have been dubbed supernova imposters. Such stars are thought to reach temperatures of at least 7,000 kelvin — hot enough to trigger partial explosions as material from their surface layers peels off and escapes. However, Rest and his colleagues found that the spectra of the light echoes indicate that the star was far cooler: only about 5,000 kelvin. Their results are published today in Nature1. “η Carinae is supposed to be a prototype of a supernova imposter, but it turns out that its temperature is so low, it cannot be a supernova imposter at all,” says Rest.

Augusto Damineli, an astronomer at the Institute of Astronomy, Geophysics and Atmospheric Sciences at the University of São Paulo, Brazil, who originally discovered that the star system was binary2, says that the findings are a huge surprise. “All well educated astronomers would have bet that they would find the spectrum of a 7,000-kelvin star,” he says.

Rest's results have left astronomers flummoxed over what caused the eruption and why it did not destroy the star. One guess is that the explosions were triggered by increased gravitational interaction as the two binary stars veered close together in their orbits, says Rest. Damineli, however, favours an alternative explanation: that high temperatures at the star’s core can generate pairs of electrons and their antiparticles, positrons, which rapidly recombine, creating an instability that could set off a partial explosion3.

To help to choose between rival theories, Rest and his team are searching for η-Carinae light echoes coming into other parts of the sky, which will allow them to build up a fuller profile of the speed and temperature of ejected matter to compare with simulations. “So far we have just scratched the surface of what echoes can reveal,” says Rest.