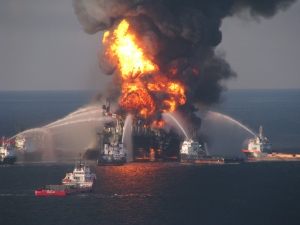 The legislative response to the Deepwater Horizon disaster has been inadequate, say experts.

Many of the problems that led to the 2010 BP Deepwater Horizon oil spill have not been addressed, say the members of a commission set up by US President Barack Obama to study the disaster. The group releases a report (PDF) today on progress towards its 2011 recommendations for preventing future disasters and improving spill response.

The commission, which no longer formally exists, conducted visits and interviews under its own initiative ahead of the spill’s two-year anniversary on 20 April. “Once we announced we were doing it, people seemed eager to talk to us,” says Donald Boesch, president of the University of Maryland Center for Environmental Science in Cambridge, and one of two scientists on the seven-member commission.

The US Congress fares worst in the new report, earning a 'D' rating for its failure to enact any meaningful legislation in response to the disaster. The Restore Act would allocate 80% of any fines that BP pays for the spill under the Clean Water Act to restoring the environment and economies of the states in the Gulf of Mexico, but the act has stalled in the House of Representatives.

The Obama administration did better, with a B, thanks in part to new drilling regulations. These also led to a B for safety and environmental protection and a B– for response and containment.

Boesch says the commission was "quite impressed" by the oil industry's efforts to improve safety, giving it a C+. The new regulations have prompted the industry to fund organizations to build equipment and capabilities to contain future sea-floor blowouts.

Oil companies have also combined to create a Center for Offshore Safety in Houston, Texas, whch is developing the environmental safety management systems now required by drilling permits. The US oil industry had resisted such a requirement, despite working under similar systems in Canadian waters and the North Sea. “This spill allowed some of those good ideas to move forward,” says Boesch.

But, he adds, without legislation to make more stringent drilling regulations permanent, current or future administrations could easily relax or withdraw regulations: “You need legislation that codifies many of these requirements."

Robert Bea, a former offshore drilling worker and engineer at the University of California, Berkeley, says that although there have been some improvements, a cultural shift towards safety may still be a long way off. “The industry has returned to essentially business as usual,” he says.

In its formal report, released nine months after the Macondo-well blowout1, the commission paid special attention to drilling in frontier areas such as the Arctic, ranking related efforts a C.

Dennis Takahashi-Kelso, executive vice-president of the Ocean Conservancy, an environmental organization based in Washington DC, was Alaska’s commissioner of environmental conservation during that state’s 1989 Exxon Valdez oil tanker spill. He sees a lack of attention to frontier safety as one of the most disturbing drilling issues.

“In frontier areas there is enormous pressure to proceed with exploration even without either demonstrated oil-spill response ability or sufficient scientific information,” he says.

The commission gave current understanding of spill impacts and restoration efforts a C. Boesch commends the research carried out since the Deepwater Horizon spill.

However, he says, another large spill might be harder to study. The US National Science Foundation funded several research expeditions in the Gulf under a programme designed to enable researchers to respond to sudden events. Another big Gulf spill might not meet the programme's requirements.

The risks are high that there will be no action on many of the issues arising from the Gulf spill, Boesch explains in a commentary article in this week's Nature (see "Deep-water drilling remains a risky business").

Bea agrees, noting that countries such as Norway have learned more from the spill than the United States. “Our national response to the Macondo disaster has been a disaster,” he says, “What a waste of an opportunity to learn and do better.”