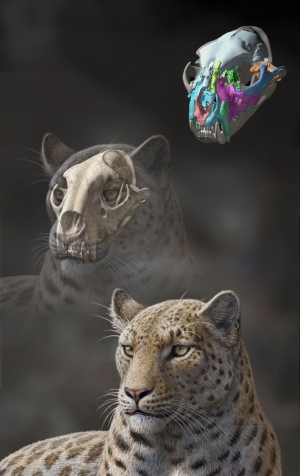 Big cats similar to today’s snow leopard have prowled the Himalayas for the last 6 million years, an analysis of newly described fossils reveals1. The remains of Panthera blytheae extend the known lineage of pantherine cats by at least 2 million years and bolster the notion that this group of carnivores originated in Asia.

Researchers unearthed bones representing at least three individuals in southwestern Tibet. The most complete remnants include a partial adult skull with several teeth still embedded in the upper jaw, says Jack Tseng, a vertebrate palaeontologist at the American Museum of Natural History in New York. Those fragments were excavated from rocks about 4.42 million years old, but other fossils belonging to the same species came from nearby strata that were laid down about 5.95 million years ago, he and his colleagues report today in Proceedings of the Royal Society B1.

“These are beautiful fossils of great significance,” says Zhe-Xi Luo, a vertebrate palaeontologist at the University of Chicago in Illinois who was not involved in the study. “They add an evolutionary root to the pantherine family tree.”

Many features of the P. blytheae’s teeth are similar to those of the snow leopard, but some ridges and cusps are distinct, indicating that the fossils represent a new species. Judging from the size of the partial skull, the big cat was about the same size as the clouded leopard and about 10% smaller than the snow leopard, both of which live in the Himalayas today. A comparison of dozens of anatomical features for 12 living and extinct species of felines indicates that the snow leopard is P. blytheae’s “sister species”, says Tseng. Today’s tiger is also a very close relative, he adds.

Previously, the oldest known fossils of pantherine cats were fragmentary remains unearthed from 3.8-million-year-old rocks in Africa. That finding inspired some scientists to suggest that big cats originated there and then spread to new habitats elsewhere. But the new specimens, and the greater diversity of big cats in eastern and southern Asia, supports the idea that this group first appeared in Asia, says Tseng. The current pantherine family tree, as well as genetic analyses of living or recently extinct species, suggests that the group first evolved about 16 million years ago.

The evolutionarily advanced characteristics of P. blytheae are somewhat surprising, says Lars Werdelin, a vertebrate palaeontologist at the Swedish Museum of Natural History in Stockholm. “I’d have expected something this old to resemble more of a basal [less evolved] cat.”

P. blytheae's striking similarity to modern species such as the snow leopard and clouded leopard makes it hard to say what pantherine progenitors might have looked like, Werdelin adds: “We’d need quite a lot of intermediate fossils to know how the lineage developed.” It is even possible, he says, that palaeontologists have already unearthed some of those ancient forebears but, lacking transitional fossils, have not yet recognized them for what they are.