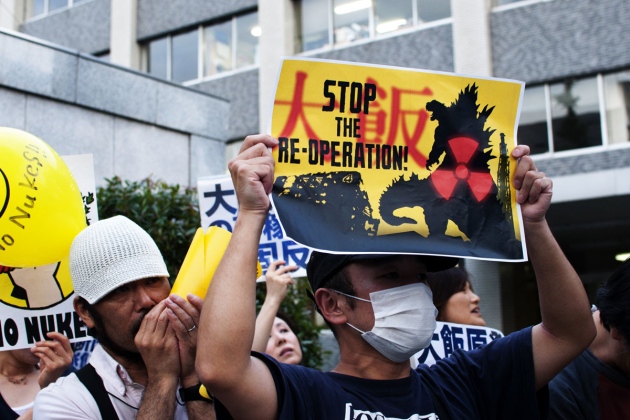 The decision to restart some nuclear reactors in Japan has attracted large protests.

Two Japanese nuclear reactors are set to restart next month, despite tens of thousands of people throughout Japan pouring into the streets in protest. But warnings from scientists about the potential for earthquakes in the region could pose one last hurdle.

All 50 of Japan’s operational reactors have been closed for scaled-up safety evaluations since the March 2011 meltdown at the Fukushima nuclear plant. But the government has been pushing to restart some of the reactors before the summer peak in electricity demand in August. On 16 June, Prime Minister Yoshihiko Noda gave the green light to restart two Kansai Electric Power Company (KEPCO) reactors at a plant in Ohi, some 50 kilometres north of Kyoto. On 27 June, KEPCO shareholders voted to go forward with the restarts, despite as many as 40,000 people protesting in front of the Prime Minister’s residence and several other protests in towns and cities throughout Japan.

Final maintenance checks are now being made. One reactor is scheduled to go online in the first week of July and to be operating at full power within a week. The other would restart later in July.

But on Tuesday at a press conference in Tokyo, geomorphologist Mitsuhisa Watanabe of Toyo University in Tokyo, and Katsuhiko Ishibashi, an emeritus seismologist at Kobe University, said that KEPCO has underestimated the threat of an earthquake at the Ohi plant.

Ishibashi’s criticism was leveled at a 2006 government assessment of nuclear reactors operated by KEPCO and other utilities. The assessment, or ‘back-check’, was conducted according to newly set seismic design specifications. In one part of the analysis, KEPCO estimated the ground shaking that could come from three faults near the plant — the FO-B,  FO-A and Kumagawa faults. According to Ishibashi, these three faults could break together, producing tremendous shaking.

Yoshihiro Yamamoto, a KEPCO spokesman, told Nature that the company does not consider such a simultaneous event to be likely. But the Japanese Nuclear and Industrial Safety Agency asked the company to make an estimate, just in case, as part of the 2006 assessment. They estimated 760 gal, a measure of ground acceleration from an earthquake. Ishibashi questions this figure, saying that many variables with large uncertainties are at play. He says that the KEPCO estimate was made using average parameters. But given the difficulties in making such an estimate, he says they should be ready for the strongest shaking ever recorded — 1,699 gal. “It’s clear that the utility is not issuing the maximum possible figure,” says Ishibashi.

More troubling for KEPCO is Watanabe's claim. Watanabe looked at KEPCO documents from a previous evaluation done in the 1980s, when the two reactors were being planned. He found two radically different schematic drawings based on the investigation of a trench dug to look for evidence of recent earthquakes. One schematic did not show evidence of a recent fault. The other did. Only the former was submitted in 2006.

Yamamoto says that KEPCO’s analysis of the sediments covering the fracture zone clearly showed that the fault had not been active for at least 120,000 years.

But Yuichi Sugiyama, a seismologist at the Active Fault and Earthquake Research Center in Tsukuba who was on the 2006 committee that evaluated and approved the design of the two reactors during the back-check, says that the schematic that was omitted needs to be considered. In an e-mail to Nature, he says that its captions are ambiguous and that it needs to be re-examined “immediately”. He suggests comparing it to photos and field notes from the original trench investigation. “If that cannot confirm that it is not an active fault, a follow-up geological survey will be required,” he says.

Watanabe is pushing for the latter solution. On 27 June, he showed up with five parliamentarians at the Ohi plant. There he suggested three locations where an excavation could confirm whether it is an active fault. “It would take less than a week,” says Watanabe.