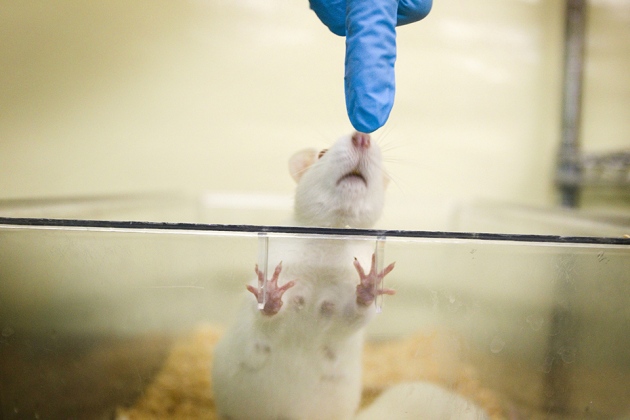 Lasers shone into the brains of mice can now activate individual neurons — and change the animals' behaviour. Scientists have used the technique to increase how fast mice drink a milkshake, but it could also help researchers to map brain functions at a much finer scale than is currently possible.

Neuroscientists at Stanford University in California conducted their experiments on mice that were genetically engineered to have light-sensitive neurons in a brain region called the orbitofrontal cortex. That area is involved in perceiving, and reacting to, rewards. By shining a laser at specific neurons, the researchers increased the pace at which the mice consumed a high-calorie milkshake. The results, reported on 12 November at the annual meeting of the Society for Neuroscience in San Diego, California, illustrate for the first time that the technique, known as optogenetics, can control behaviour by activating a sequence of individual cells.

One goal of optogenetics is to create automated systems that manipulate the brain on the fly using only light, says Michael Häusser, a neuroscientist at University College London, UK. This might be done by engineering neurons to contain one protein that makes the cell fire when activated by a flash of coloured light, and another that causes the cell to flash in a different colour when it fires. A device that detected this second colour could quickly determine sites of activity associated with certain behaviours and customize which cells the first light would stimulate in response. Such a system might be able to alter the neural processes that link alcohol with reward in addiction, or a visual trigger with flashbacks in post-traumatic stress disorder.

It would also require precision beyond the capability of current optogenetic techniques, which activate clusters of cells. In some cases, activating just one neuron can change an animal’s behaviour 2, so accidentally hitting a cell’s neighbour could confuse efforts to map the brain.1

In the mice experiment, the Stanford team led by neuroscientists Joshua Jennings and Karl Deisseroth shone a laser through a device that scatters the light into a pattern that hits specific neurons.

To ensure that the cells they targeted were specific to food rewards, the researchers mapped cells involved in social rewards, which are mixed in with the calorie-reward cells but drive very different behaviours. They allowed a baby mouse to run around in a tube inside the microscope and touch noses with the mouse whose brain was being imaged and then mapped which neurons responded when the two animals interacted.

When the researchers repeated the first experiment with the high-calorie drink, but stimulated the social neurons rather than the food-reward ones, the mouse continued to lick up the water at the same speed. The team is now trying to determine whether activating the social neurons will make the animal act as though it is sensing pheromones by, for example, moving its whiskers, even when the baby mouse isn’t present.

The behaviour modification is an important step in exploring the potential of single-cell stimulation, says Weijian Yang, a neuroengineer at Columbia University in New York City. At the meeting, he and neuroscientist Luis Carrillo Reid presented a different approach to behaviour modification, artificially linking neurons that are normally involved in very different behaviours. The pair trained mice to lick at a reward only when they see a certain pattern shown on a screen, and mapped the neurons that respond to the image and those that respond to the reward.

Carrillo Reid says that repeatedly stimulating these unrelated neurons using optogenetics will eventually cause them to fire in sync, so that stimulating just one of them will cause the mouse to see the pattern and lick, even when the pattern isn’t there.

Häusser is impressed with the work and says that the next step is to figure out the entire neural pathway that is being changed. It will also be important to work out what the mouse perceives when its brain is stimulated, so that any changes can be made to feel as natural as possible. “The real potential of all-optical control has yet to be unlocked,” he says.