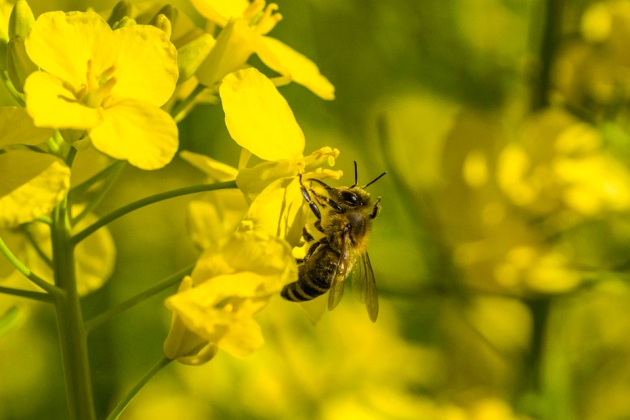 Bees are harmed by neonicotinoid pesticides, according to a large-scale field study.

The largest study so far on the fraught question of whether neonicotinoid pesticides harm bees is providing new ammunition for those who argue against the use of the controversial chemicals.

“We’re showing significant negative effects at critical life-cycle stages, which is a cause for concern,” says Richard Pywell, who studies sustainable land management at the Centre for Ecology and Hydrology near Wallingford, UK, and is co-author of a paper resulting from the experiment, published on 29 June in Science1.

However, the work was mainly funded by two major neonicotinoid makers, Bayer CropScience and Syngenta. They question the scientists’ conclusions and defend the pesticides, which are already banned or restricted in several countries. The researchers who did the work say they were totally independent.

In recent years, concern has grown among scientists and policymakers that neonicotinoids harm bees; the pesticides are often applied to seeds before they are sown, and can later be found in pollen.

But laboratory studies investigating the effects on bee health and behaviour have sometimes been criticized for giving the bees bigger doses of the chemicals than they would experience outdoors. And previous field trials have produced inconsistent results, for example finding harm to wild bees but not to honeybees2.

To try to settle some of the outstanding questions, a team led by the Centre for Ecology and Hydrology undertook the biggest ever study of its kind, funded with US$3 million from Bayer CropScience and Syngenta, and another £400,000 (US$520,000) from the institution itself. They distributed three bee species — honeybees (Apis mellifera) and two wild varieties, bumblebees (Bombus terrestris) and solitary bees (Osmia bicornis) — across 33 field sites in the United Kingdom, Germany and Hungary growing oilseed rape. Some were placed near crops protected with neonicotinoids, and others in fields where no neonicotinoids were used.

Although the study found that neonicotinoids have an overall negative effect on bees, the results aren’t completely clear-cut: the pesticides seemed to harm bees at the UK and Hungarian sites, but apparently had a positive effect on honeybees in Germany. Pywell notes that the German effects were “short lived”, and the reason for them is unclear. They might be linked in part to the generally healthier state of hives in the German arm of the trial, he speculates.

The study’s funders have responded by questioning the authors’ data analysis and conclusions. Peter Campbell, a senior environmental specialist at Syngenta, says the data show that there are circumstances in which neonicotinoids can be used safely. The study’s “very negative” conclusion is unfair, he adds.

Christian Maus, Bayer’s global lead scientist for bee care, also disputes the authors' conclusions and questions some of their statistical analysis. In a statement, Syngenta, based in Basel, Switzerland, also called the data “variable”, and Bayer CropScience, headquartered in Monheim am Rhein, Germany, said the study delivered “inconsistent results”.

The finding comes at a crucial time for the industry, because the European Union is reviewing a 2013 ban it imposed on the use of neonicotinoid products to coat seeds. The EU is expected to reach a conclusion later this year, and the restrictions could either be removed or extended.

Pywell says that he stands by the paper, which was peer reviewed. He also notes that the entire experiment was conducted under the scrutiny of a independent advisory board that included a statistician. The differences between countries are intriguing, he adds, and should be investigated further.

But as the industry complains, those who advocate for more control of neonicotinoids have welcomed the results.

“You’ve got to give them 10 out of 10 for effort,” says Dave Goulson, a bee researcher at the University of Sussex in Brighton, UK. The study is “well designed, well replicated, well funded — ironically by industry who won’t be best pleased. But the results tally with what has gone before.”

“It’s reached a point where it’s just not plausible to keep denying these things harm bees in realistic studies,” he adds. “I’d say it’s the final nail in the coffin.”

Nigel Raine, who studies pollinators at the University of Guelph in Canada, says the study answers a number of debated questions, for example, the finding that neonicotinoids negatively affect honeybees in fields. “That’s been a question mark in a lot of debates.”

A separate study published at the same time in Science3 looks at the situation in North America. Insect researcher Amro Zayed and his team studied how routine use of neonicotinoid pesticides on farms affected bees in Canadian regions where maize (corn) is grown. Their work was funded by the Ontario Ministry of Agriculture, Food and Rural Affairs.

“The knowledge of how much neonicotinoids are found in nature and for how long is very patchy,” says Zayed, who works at York University in Toronto. “One of the biggest surprises we found was we were detecting neonicotinoids all through the growing season. The duration of exposure was frankly a lot bigger than anybody expected.”

Zayed’s team found that honeybees were exposed to “toxicologically significant” levels of neonicotinoids throughout their active season. In follow-up lab work, the researchers fed bees levels of the chemicals that were equivalent to those observed in the field. They found that the insects had shorter lifespans than undosed bees, and their colonies were less able to maintain healthy queens.

A lot of the findings are results that “other researchers have found but their work was criticized as unrealistic”, notes Zayed.

Zayed’s study also shows that bees fare worse when exposed to neonicotinoids in combination with a fungicide crop treatment. Raine says that this is an area for future study, along with the country-to-country differences seen by Pywell’s group.

“What comes out of all these studies is the complexity in the system,” says Raine.