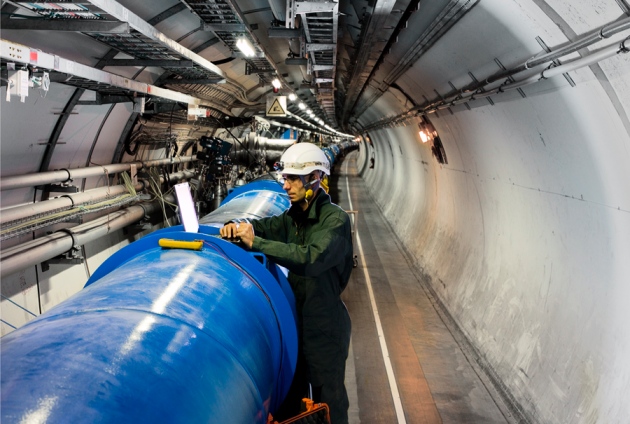 The upgraded LHC could help solve mysteries such as the origin of dark matter.

The Large Hadron Collider (LHC) has kicked off its second run, as protons circulated in the machine after a two-year break. Researchers at CERN, Europe’s particle physics laboratory near Geneva, Switzerland, spent the hiatus upgrading the collider to run at a higher energy and with a greater intensity of collisions.

Start-up was delayed by two weeks after a piece of metal caused a short circuit in the safety system around one of the LHC’s superconducting magnets. Engineers cleared the debris on 30 March by vaporizing it with a discharge of current.

Today (5 April), two beams, of relatively low energy and each containing just a bare minimum of protons, circulated in opposite directions around the LHC's 27-kilometre ring. But they are not yet ready to collide. “Bringing the LHC back on, from a complete shutdown to doing physics, is not a question of pushing a button and away you go,” says Paul Collier, head of beams at CERN.

Collier and his team will spend the next eight weeks bringing more and more systems online, allowing engineers to fine tune and clean the beams. CERN will also turn on the LHC’s acceleration system, increasing the energy of each beam from 450 gigaelectron volts (GeV) to 6.5 teraelectron volts (TeV), and 'squeezing' the beams into narrower channels, in preparation for collisions.

Physicists expect to begin collisions in the first half of June.

Once the CERN scientists have a good understanding of how their machine is running, they will increase the number of proton bunches zipping around the ring. “By the time we’ve finished the intensity ramp-up, we’re talking about hundreds of megajoules in stored energy in the beam, which can cause damage if it’s not controlled,” says Collier.

Eventually, the revamped LHC will smash together 1 billion pairs of protons every second, with an energy of 13 TeV, an increase on the machine’s previous record of 8 TeV.

In 2012, more than two years after the machine first started up, LHC experiments found the long-awaited Higgs boson, a particle related to the mechanism that endows other particles with mass.

The second run does not have such an obvious target. Instead, physicists will scour the data for signs of phenomena that do not fit with the standard model of particle physics in hopes of solving mysteries such as the origins of dark matter.