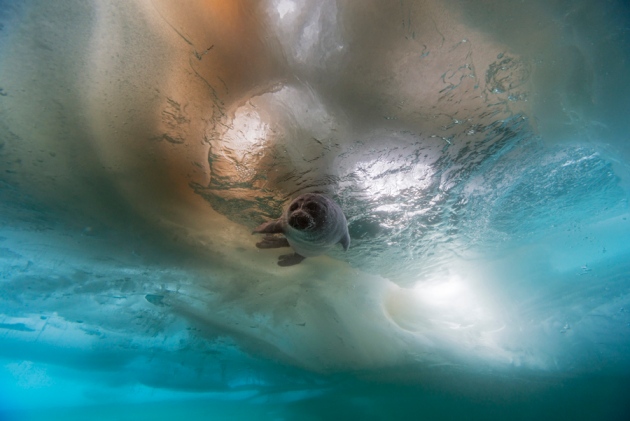 Warming in Lake Baikal in Russia is threatening seals that birth their pups on lake ice.

From Baikal to Tahoe, the world’s lakes are warming quickly — by about 0.3 ºC each decade on average, according to a new global synthesis of lake temperature data. The heat-up may be already triggering major ecosystem shifts, from harmful algal blooms to declining fish populations.

Yet the study's authors, who tracked lake temperatures from 1985 to 2009, also found that some lakes bucked this global trend, and cooled during this time. That could be because of land-use changes, such as trees growing back in once-cleared areas and shading the lakes, or glaciers that are melting and feeding frigid water into nearby lakes.

The sheer variety of changes suggests that individual lakes may behave differently as air temperatures rise. “There are a lot of really different ways lakes are going to respond to climate change,” says Stephanie Hampton, an aquatic biologist at Washington State University in Pullman.

She and her colleagues reported their findings on 16 December at a meeting of the American Geophysical Union in San Francisco, California. The work will appear in an upcoming issue of Geophysical Research Letters1.

Many small-scale studies have documented one or a couple of lakes warming in recent decades. Space-based studies have confirmed the same general trend, with lakes at higher latitudes warming the fastest2. But the new work is the first to try to synthesize many of the lake-sampling measurements with global satellite data.

At first glance, it might seem obvious that lakes will heat up as air temperatures above them increase. But how much lakes warm, and why, varies dramatically. Size is a major factor: smaller lakes warm more quickly than large ones, which is why it’s more comfortable to swim in a pond than a large lake in early summer. Ice cover is another: the more reflective ice there is on a lake, the more sunlight bounces back into space, keeping the water relatively cool. Changing cloud cover can also affect lake temperature.

Lakes reflect the environment around them; they can be made made murky through agricultural run-off or fresher by mountain streams. That interconnectedness makes lakes a unique bellwether for studying local climate change, says team member Simon Hook, a senior research scientist at NASA’s Jet Propulsion Laboratory in Pasadena, California. “A lake is an integrated story of what’s going on in a region, as opposed to an air temperature that can change in a second,” he says.

The research team, known as the Global Lake Temperature Collaboration, combined satellite measurements of lake surface summer temperature — taken at night, to avoid daytime heating effects — with long-term records made by limnologists at 235 lakes. The average rate of increase, of 0.34 ºC per decade, is faster than the rate at which air temperatures increased. 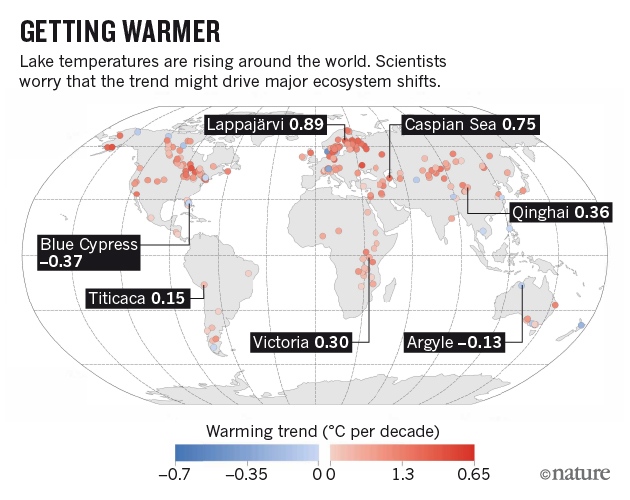 The most rapidly warming lakes were scattered around the globe. They include Siberia’s ancient Lake Baikal, where warming temperatures are threatening the Baikal seal (Pusa sibirica), whose pups are born on lake ice. In agricultural areas, warmer waters can fuel harmful algal blooms, like those that plagued Lake Erie, one of North America's great lakes, this summer.

Even moderate warming can stress lake ecosystems, Hampton says. Lake Tanganyika, one of Africa’s great lakes, is warming only a little, but that change is enough to affect its stratification3. As the topmost warm layer become warmer over time, the lake becomes less likely to mix the top layer with cold water underneath. Algal growth in deep waters plunges; fish have less to eat, and so do the fishermen who rely on them.

Roughly 10% of the lakes studied showed a cooling trend. They included several in Florida where changes in tree cover, and other land-use changes, could be affecting how much sunlight reaches the lake waters. On the Tibetan plateau, lakes were cooling because of fresh icy water flowing into them.

Even lakes at the same latitude, which might be expected to have similar responses to warming, showed big differences. “That kind of variation was a big surprise,” says Henry Gholz, an ecologist and programme manager at the National Science Foundation in Arlington, Virginia.

Scientists understand relatively little about how climate change is affecting lakes, he adds. “They really haven’t been highlighted as much compared to other ecosystems.”

The Global Lake Temperature Collaboration is working to better understand the variations among lakes, including whether the changes have accelerated in recent years, from 2010 onwards.

For now, Hampton says, the shifts are evident. At Baikal, where she works, researchers used to hold informal competitions about who could swim the longest in the frigid waters without a wetsuit. “They still go out for a swim,” she says. “But it’s not the competition it used to be.”

Due to an editing error, a graphic in this story displayed incorrect data on lake temperature changes.